In this country, it is wise to kill an admiral from time to time to encourage the others

That’s a line from Voltaire’s Candide. After the battle of Minorca between France and Britain in 1756, Voltaire describes the British practice of shooting naval officers if they fail, not so much to punish them for mistakes but to send a signal to the others not to let down His Majesty. “Pour encourager les autres”.

What’s this got to do with bike racing? Well the incident in last Sunday’s Paris-Roubaix where some ignored closed barriers at a level crossing requires exemplary action from the UCI. In the interests of safety the UCI has to view video and photographic evidence and disqualify those who ignored the closed barriers.

As for what happened last Sunday, it’s easy to understand. The race speeds towards the crossing only for the lights and bells to start ringing. Legally this is when the motorist and the cyclist on an ordinary day must stop. But the UCI rules are more generous to a racer: they say stop when the “barrier is down”.

Rightly or wrongly the rules suggest riders can ignore the lights and bells, only a closed barrier is sufficient, nitpickers would note that a closing barrier is fair game for vélo-limbo. Fair enough, it’s loud, riders aren’t looking out for traffic lights and they’re in battle mode. In a race you can imagine being 20 metres away when the warning bell rings and you can’t stop safely. Only the next rider behind will follow and the next behind him. Soon some riders will have noted the warnings but they see rivals continuing so they push on too. It’s a chain reaction and a bit like being in a stadium where if the person in front of you for a game or a gig stands up then you stand up to see over them and in no time everyone is standing: one person’s actions prompt everyone to mimic them. 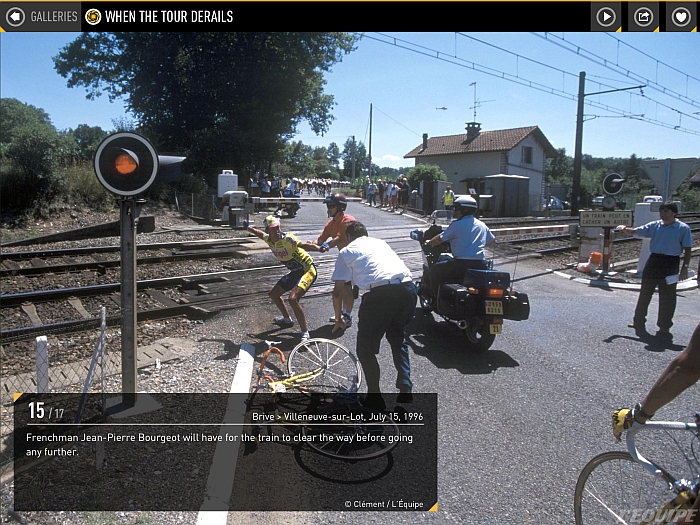 Then the gates start closing. Again a rider might see the barrier moving but he’s more interested in the rider ahead of him. “If he’s got across then I have to as well” is the instinctive reaction. There’s also the supposition of safety in numbers. Now you might be thinking they ought to stop when the barriers move but you’re not in the biggest, baddest race of the year seeing your rivals get ahead of you. It’s this competitive imperative that drives the riders on, including the Cannondale-Garmin and BMC Racing riders on Sunday who sees the gates are closed and the gesticulating gendarme… and cross the tracks. See the video of this on Youtube.

So far, so explanatory but it’s important to understand the pressure, the motivation and the instinct to race. But there’s one obvious problem with this: it’s deadly. Imagine the rider who almost stops, shifts to a lower gear and drops their chain mid-crossing, feet pedalling but going nowhere as the train approaches. Better still, don’t.

The UCI has to act: the governing body is reviewing the matter but it should know its own clear rules: “offending riders shall be eliminated”. Now they weren’t upheld on Sunday but the UCI rules aren’t temporary: they exist before a race, during a race and after a race. So if the commissaires didn’t uphold the rules in the heat of the moment then a cooler head has to do so after the event. The idea last Sunday is that the commissaires were too far back to identify those who crossed when the barriers were down and it’s legitimate to put this down to the “fog of war”, certainly the commissaires can’t be everywhere in a race. But the UCI can look at photos and videos, they’re are plenty given this is one of the biggest races of the year. If anything the conduct has to be exemplary so that younger riders learn what to do.

Now DQ’ing riders isn’t out of the desire to harm those riders who crossed the tracks last Sunday. Perhaps you’re cross and would like to punish them but try to be level and understand their instincts, however reckless. Instead disqualification isn’t about last Sunday, it’s about the next time. It’s needed to send a clear message. Because the next time a rider is approaching a crossing and the lights are flashing and the gates are closing they need to make a split second calculation and knowing that to continue will result in certain disqualification will ensure they stop. In a race anyone at the back of the group is operating on survival instinct and only primal reasoning works. Forget Swiss Franc fines or nuanced probabilities about the chance of being caught. Only the certainty of disqualification appeals to the brain.

Cheating: the UCI has added pressure to act having recently published its CIRC Report. While a lot of the focus fell on doping the writers did dwell on the deontology of cheating, whether taking a risky but as yet not banned substance or the tales of hidden motors in bikes. All well and good but not half as dangerous as trying to slip past a 250 tonne train approaching at 100km/h while a more ethical rider waits for the barriers to open.

The law: as well as the ethics there’s the law. Crossing the tracks is illegal and the SNCF, the French railways, have already filed a complaint with the police. If the UCI doesn’t act to sanction the riders perhaps this will only encourage the police to follow-up?

Finally some specific things for Paris-Roubaix: 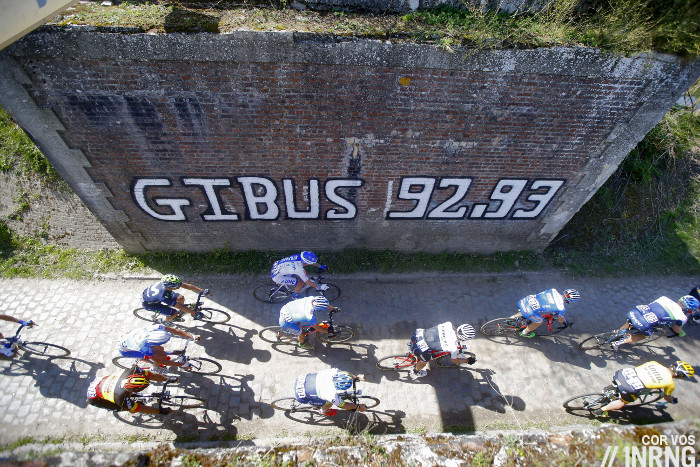 Conclusion
The rules are clear: riders are supposed to be disqualified during a race by the commissaires. For various reasons this didn’t happen but the UCI shouldn’t allow its own officials to flout their own rules. Whatever next? Once the rules become optional the UCI’s legitimacy is up for debate. Now sometimes breaking the rules doesn’t matter, say, the use of rainbow decals on a bike because it’s not a big deal. In the case of a level crossing the argument is so much stronger.

It’s harsh to disqualify the riders and under the rules those crossing when the lights flash and even squeezing under moving barriers maybe get a pass. But some still went when the barriers were locked down and this can’t be tolerated. It might be farcical to revise the race results ex post but it’s happened before. Above all to disqualify a rider isn’t about them and their ride last Sunday it’s about the next time. The UCI has to be exemplary to encourage the others.