The Moment The Race Was Won: E3 Harelbeke 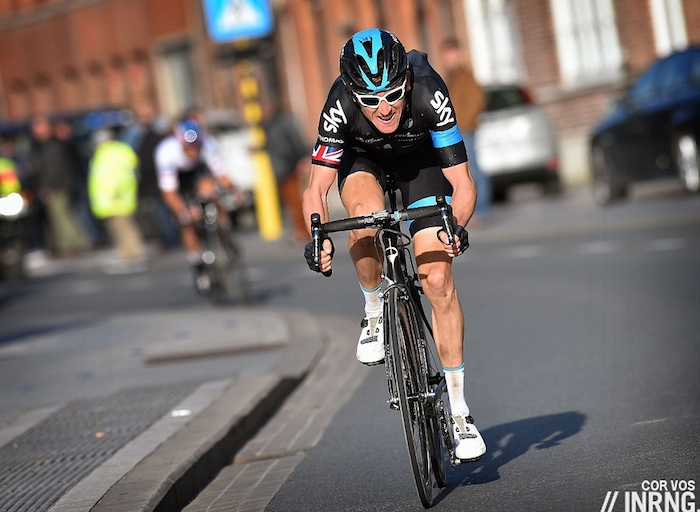 Geraint Thomas goes solo with 4km to go. A year ago he reached Harelbeke with Peter Sagan and paid the price in the sprint. Now he went clear of Sagan and Zdeněk Štybar to win alone.

It marked a tense conclusion to a dramatic race, although the number of crashes will cast a shadow over the rest of the cobbled classics.

It was a relief to get the racing underway after the débâcle over the race poster. Although don’t expect anything different for 2016 as the race organiser was spotted brandishing some blue panties in the start area. E3 Hecatomb: a huge crash on the Haaghoek took out many riders including Fabian Cancellara, now diagnosed with two cracked vertebra and out for the spring classics. Cancellara wasn’t alone, Sebastian Langeveld was loaded into an ambulance and others quit the race too. But Cancellara’s injury means so much more than a DNF, without him and Tom Boonen any upcoming races risked being diminished by their absence and if there’s meant to be a new generation coming through it’s not supposed to happen so brutally. Boonen and Cancellara will be missed, the Swiss rider is an honorary Flandrien with a lot of support in Belgium and the racing will be different too, especially Cancellara’s willingness to pounce late in a race.

Ornithologists will be delighted by the rare appearance of a condor in Belgium. The Condor of Tunja was out of his natural habitat but Nairo Quintana seemed fine for most of the time before abandoning. He passed the test but wasn’t fighting for position with the same ferocity he’ll need in July.

The were obvious moments of demolition but look closer and the race was a study in rising tension. If there was a way of measuring rider density the Rider/m² ratio was getting high very early. Riders were trying to crowd at the front of the bunch with 90km to go while others were being tailed off one by one; this provoked more crashes but the speed and stress meant more got dropped than fell. For the next 40km we got a series of moves from secondary and tertiary team riders. BMC particularly active, a red jersey was been fired off the front of the peloton every few minutes.

With 50km to go up the Kapelberg the early break was being thinned but still away. It’s on the Paterberg and Oude Kwaremont combo that everything changed. Sep Vanmarcke tried a move but slipped in the gutter. He had to put a foot down and went from the front of the peloton to out the back, a fine example of how evanescent these races can be. A group of 20 riders emerged from which Greg Van Avermaet and Stijn Vandenbergh went clear but only by a few seconds and they were quickly reeled in. 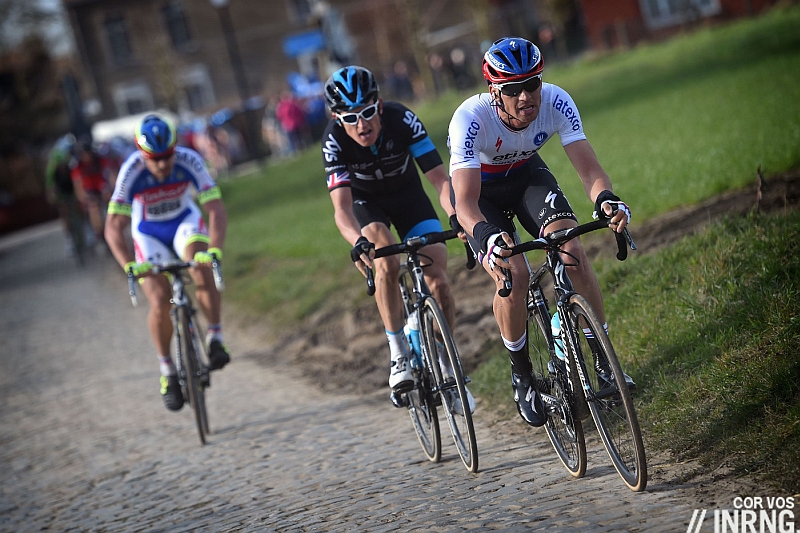 Up the Kwaremont and Geraint Thomas accelerated. The Welshman was second in Paris-Nice’s mountain stage and used the longest climb in the race to launch his move. He was soon joined by Zdeněk Štybar, the ex-cyclocross rider gliding across in smooth style. They were accompanied by Peter Sagan, his bulky style resembling a builder pushing a wheelbarrow.

So there it was, a three man move with 40km to go, the holy trinity of Harelbeke, the E3 escapees. Too few riders with too far to go? Perhaps but being up the road granted the trio an option on the victory. Crucially as much as this was an offensive move by the trio there were defensive tactics being used behind. Every time BMC or Katusha took a pull they’d flick off to find a Sky or Etixx rider dawdling on their wheel. Yet BMC and Katusha had reasons to keep trying because Etixx and Sky didn’t have an obvious sprinter. Occasional work from Giant-Alpecin’s Zico Waeytens helped and the gap was falling but all was not well. FDJ’s Yoann Offredo floated off the front; he wasn’t going to get away but the fact that he could drift clear showed the chase wasn’t furious. Meanwhile Sep Vanmarcke needed to change a shoe, as if having to put a foot down earlier had damaged something. Still with 25km to go the gap was reduced to 34 seconds and falling, it showed 25 seconds. The suddenly Greg Van Avermaet fell on a corner, somersaulting over the bars. He got up and rode to the finish but it meant the chase group was stunned and BMC stopped working. In less than a minute the gap to the trio doubled to 50 seconds and with 10km to go it was hovering around a minute. Again Offredo floated off the front, pointless but it showed the chase was cooked. Ties Benoot had a dig on the Tiegemberg, a remarkable debut for the Lotto-Soudal neo-pro and Ghent Uni student. Which of the trio was going to win? Peter Sagan was the obvious choice, the previous year’s winner and he packs a famous punch. Only Thomas experienced this first hand when he got smoked by the Slovak in the same race last year. Štybar by now was beginning to look ragged, his normal flying carpet style was giving way to rocking shoulders and a furrowed brow. Thomas looked inscrutable then with 4km to go he attacked. He timed his move just when Štybar was sat on Sagan’s wheel. There was a brief Czecho-Slovakian stand-off as Štybar checked while Sagan slowed and within five seconds Thomas was riding away. Štybar rode on for second place while Sagan imploded and was caught and passed by the chase group, groping for nothing more than energy gel. The Verdict: a thrilling race although too much of drama came from crashes. The way the cobbles are positioned mid-race encouraged the action to start early and the race was on with 90km to go. The Thomas-Štybar-Sagan move was a serious escape but equally defined by the composition of the chase group behind and the crafty blocking tactics. Things could have been different if Greg Van Avermaet didn’t plant his wheel in the ditch, if Sep Vanmarcke hadn’t slid on the side of the road. But that’s the conditional while Thomas rode away to the win. Fortunately the only wandering hands on the podium will have been Thomas pinching himself at the thought of landing such a big win.

Team Sky’s classics hunt is finally successful, after years of trying they land a World Tour race to top wins in Het Nieuwsblad. As ever the sport struggles to dwell on the moment, Thomas hadn’t even wiped the dirt off his race before Belgian TV were asking him about the Ronde van Vlaanderen. He’ll be hard to beat as long as he can keep up the energy and, based on this performance, deserves to be team leader given Ian Stannard was being dropped on the Tiegemberg. It’s back to the drawing board for Etixx-Quickstep, they can place plenty of riders up the road but need to exploit their numerical superiority better; perhaps Štybar should have sat on more? BMC looked very strong and will be back; Lotto-Jumbo aren’t so good collectively but Sep Vanmarcke is worth five men but is always only an accident away for trouble. Meanwhile Sagan cracked in the finish, was the effort all too much or was he just an energy gel short of the win? Oleg Tinkov will expect revenge in Sunday’s Gent-Wevelgem.