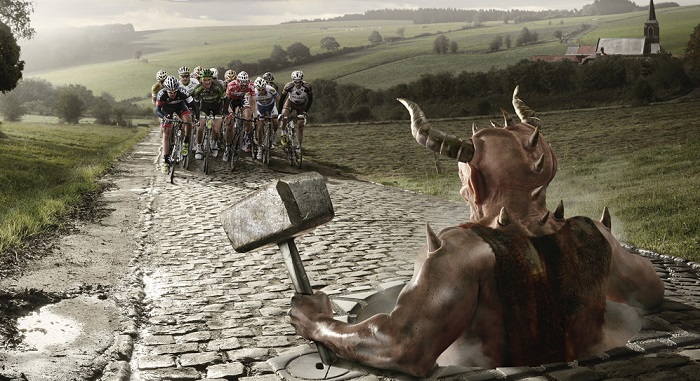 Often called the “revenge race”, today’s Kuurne-Brussels-Kuurne offers teams a chance to correct mistakes made in yesterday’s Omloop. However if you enjoyed the Omloop then today’s contest is probably not going to match it, it’s more of a sprinter’s classic even if the wind threatens to chop up the race. Here’s a quick preview.

The Route: it’s all a lie, a great deceit. The race starts and finishes in Kuurne but it never gets to Brussels, in fact it stays to the west of Ninove, a town 25km outside of Brussels. It’s also got fewer strategic points. There are nine climbs but they’re not so important. The Oude Kwaremont is hard but there’s still over 70km to go. The last one, the Nokereberg is a w-i-d-e climb on urban cobbles through Nokere, hardly a launchpad to victory but do look to see who looks smooth and who is chopping at the pedals.

The Finish: the race reaches Kuurne and crosses the line for two laps of a finishing circuit. It’s flat and has a long finishing straight to suit the sprinters.

The Scenario: Etixx-Quickstep will want this. They come with some fresh legs including Mark Cavendish, the rider with the most wins already this season. Triumph today would be great although riders and management alike are really focussed on a result in Sanremo, the Ronde or Roubaix. Indeed they might find it difficult because Guillaume Van Keirsbulck quit yesterday ill while no amount of massage will ease the legs of Tom Boonen and Zdeněk Štybar. However if they’re not up to the task other teams will take up the chase, several sprinters appear on the startlist and their teams have vested interest in a bunch gallop.

However it’s not so simple with the course and the weather. Last year saw Belkin and OPQS shred the race in the crosswinds and the probability of a bunch sprint is not as high as a flat stage of a grand tour. If there is a bunch sprint, it’ll be from a reduced group. Today’s weather forecast suggests ample opportunities to split the race up and Lotto-Jumbo might want to give it a go to avenge Sep Vanmarcke’s problems. 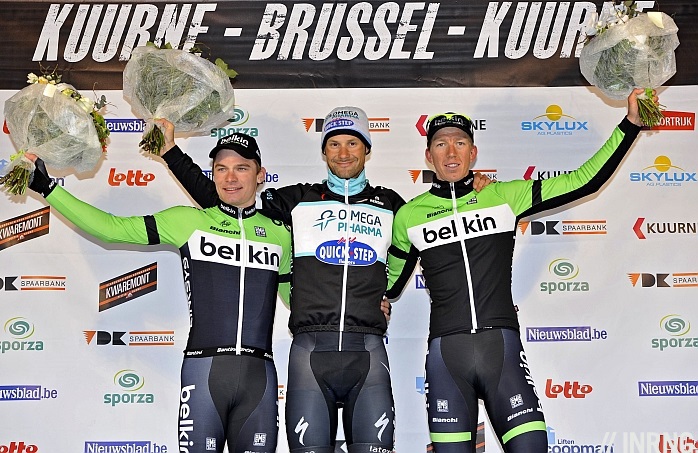 The Contenders: Mark Cavendish is the prime pick because of his sprinting form and ability to deliver when it matters. He’s won in 2012 too. His contract’s up at the end of the year and he’s made March crucial to negotiations. Sanremo is the big goal but a win today would help relieve Pat Lefevere’s distress. But we have to discount his chances because he’s not got the full team you’d pick on paper, can they control the race? If Cav has a mishap, Matteo Trentin, Yves Lampaert and Iljo Keisse offer sprint or late attack opportunities.

Alexander Kristoff is the next pick for his sprinting skills and he too wants a result. He was 11th yesterday and beaten in the bunch sprint. His form from the Gulf races should carry across, he’s known for being strong in bad weather and has a dedicated team.

Sky will feel confident and Elia Viviani is in good form with wins in Dubai and medals in the velodrome but has the track works stunted the endurance needed for today? Andrew Fenn has been hired as a sprinter too while Chris Sutton won in 2011 but has endured lean years since.

If Viviani can win, Bryan Coquard can too. The cheeky Frenchman is a new world champion on the track although let’s admit it, his pairing with Morgan Kneisky hardly constitutes the fastest duo in the world. But he won by taking part and starts today with ambitions.

Lotto-Soudal are orphaned without André Greipel but Jens Debusschere is a good replacement, 12th yesterday, reigning Belgian champion and gets the team sprint train.

Lotto-Jumbo’s Sep Vanmarcke might want instant revenge but this is a difficult ask and perhaps team management might be better asking him to hold back so that he can unleash more raw power later this month. Moreno Hofland, pipped for second place last year, is out so Tom Van Asbroeck is the sprint option and a decent option for a grey day in Belgium.

Sam Bennett is an outsider tip, the Bora-Argon 18 rider beat the best for the final stage in Oman and copes well with a few climbs too. Nacer Bouhanni and his sprint train has to deliver the goods at some point but for now they’ve resembled a goods train rather than a sleek TGV. Manuel Belletti leads Southeast and won the Trofeo Laigueglia two weeks ago, he’s accompanied by Italo-Pole Jakub Marecko who is very fast but at the start of a learning curve. IAM have Matteo Pelucchi who has proved very good so far this season but his ability on Belgian roads will be tested; Yauhueni Hutarovich tends to get one big win a year.

MTN-Qhubeka get another chance for their multi-pronged approach. Tyler Farrar punctured at the wrong moment yesterday and this season is all about classics success rather than pure sprinting but he’s still in with a chance. Amazingly they have six sprinters on a team of eight. Theo Bos has the raw power and there’s Edvald Boasson Hagen, Gerald Ciolek, Reinardt Janse Van Rensburg and Kristian Sbaragli.

Weather: a 25km/h west-south-westerly breeze will help the race to “Brussels”, Ninove really, before they turn back and face headwinds and crosswinds, one minute encouragement to split the race up, the next making it awkward for escapees. As ever in a Belgian race you rarely travel in a straight line for long so the wind direction will shift. A top temperature of 12°C.

TV: coverage in Belgium starts at 2.30pm local time with Eurosport picking up the baton at 3.00pm. The finish is forecast for 4.40pm.

It’ll be on more channels than the Omloop but if you can’t find it then see cyclingfans.com and steephill.tv.

Game of Stones: how’s that for a race poster? Or is it depicting vandalism and encouraging dangerous conduct on public roads?

Next post: The Moment The Race Was Won: Omloop Het Nieuwsblad