The UCI swung into action today following a third positive case involving a rider from Astana, promising special review of the team’s World Tour licence for 2015.

The rider involved is Ilya Davidenok, normally a rider on the subsidiary Astana Continental team but promoted to the main team as a stagiaire. It’s yet more awkward news for the Kazakh team but if it’s embarrassing their licence is probably safe for 2015.

Tests Positive for Stupidity
Davidenok has a non-negative for anabolic steroids. He’s innocent for now as this is the A-sample (sort of innocent… see the UCI’s view below) but if the B-sample comes back positive it’s an astonishing piece of idiocy. He went and won a mountain stage of the Tour de l’Avenir and the UCI’s website says the sample was taken the same day, presumably the standard post-race test for the winner. It’s like walking into a trap marked with a “BEWARE: TRAP” sign.

It’s almost so stupid you wonder if it can be true? Was Davidenok touring around France with his own steroid stash or were they being kept cool by a soigneur during the race? Did he knowingly take it or was it a “recovery” product from a soigneur? This matters because it goes to the culture of the Kazakh U-23 team and beyond. That a rider was using these old-school materials in competition is odd.

MPCC Again
The MPCC rules say a team with a third doping case have to suspend themselves for four weeks, meaning no Tour Down Under. But was Davidenok on the team? He was a stagiaire with the Astana team and rode the Vuelta a Burgos with them. But his non-negative stems from a ride with the Kazakh U-23 team in the Tour de l’Avenir. It’s probable Astana escape again and if they do have to suspend themselves the gap between the Tour Down Under and the next major race means they don’t miss much compared to this happening in March or May.

The Kazakh Connection
Davidenok is a Kazakh as are the Iglinskiys. Sometimes pro cycling is blind to nationality but it matters here: riders central to the team’s mission have been caught. Maxim was a classics winner and Davidenok was supposed to represent the future. Just 22 he won the Tour of Quinghai Lake against senior opposition and then took a tough summit stage finish in the Tour de l’Avenir. Now he’s finished.

UCI Licence Review
Innocent before guilty? Davidenok might be innocent until the B-sample arrives but this hasn’t stopped the UCI from issuing a press release saying Astana will have to appear before the UCI’s Licence Commission and mentioning Davidenok in conjunction with the licence review.

Astana held a valid licence for 2015 so it only had to go through the formal checks to race in the World Tour for 2015. Now the UCI has said it’ll have to appear before the Licence Commission, presumably to give greater assurance over its anti-doping stance.

One, Two, Three Cases?
There are Iglinskiy brothers but we should really treat their cases as one matter. Unless you believe both brothers decided to use EPO at the same time independently of each other then it’s really one case. So while it’s easy to say Astana have had three incidents, it’s more case of three riders but two separate cases in the moral sense. 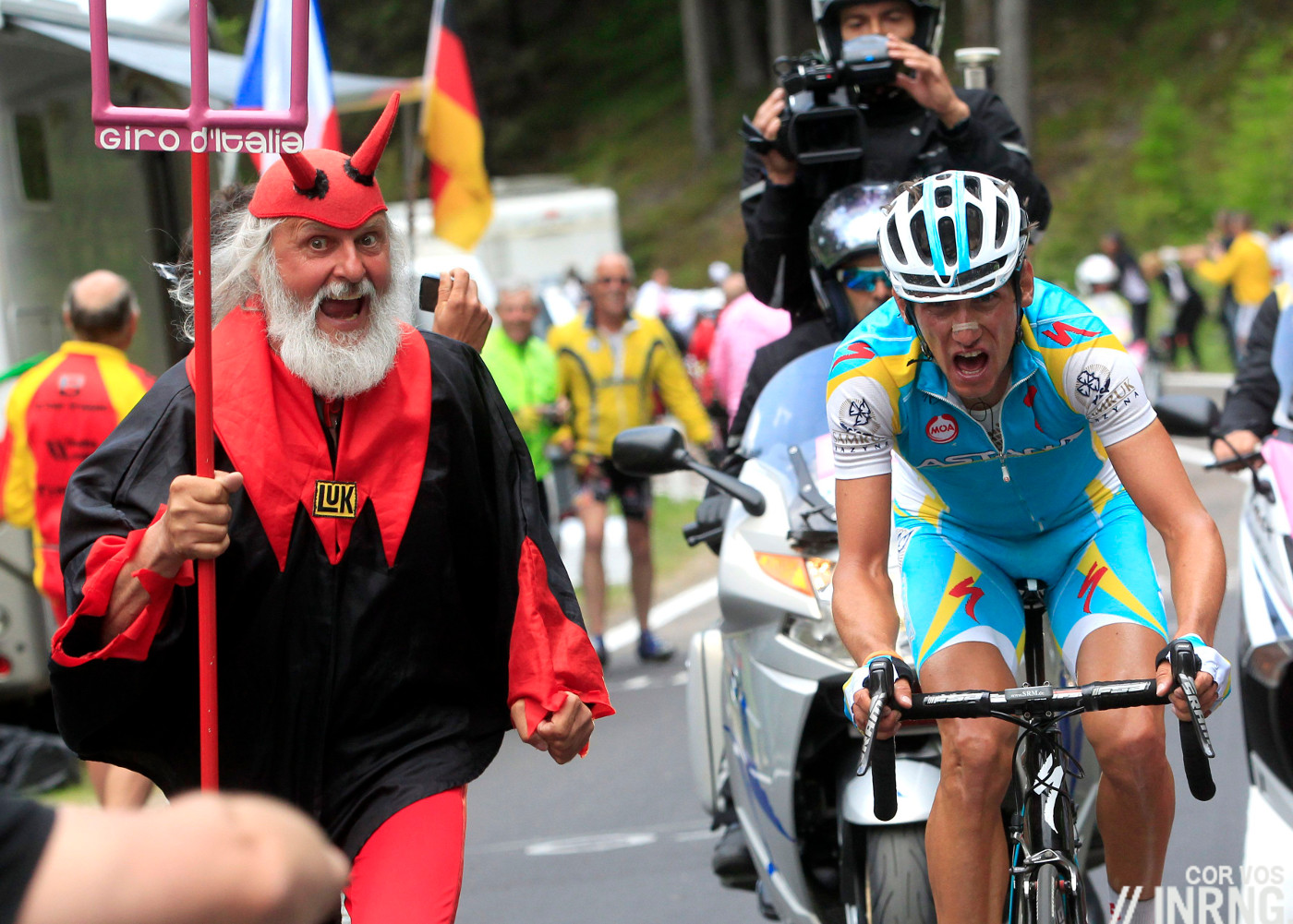 There’s also the lingering case of Roman Kreuziger. If the UCI appeals this, and the clock is ticking, then Licence Commission is likely to ask about this one too. It might relate to 2012 but – hypothetical – Kreuziger to get convicted then the team would have more explaining to do.

Why Astana Are Safe
We’ve been here before. Late in 2012 the UCI’s Licence Commission decided to rip up Katusha’s World Tour licence, frustrated by a series of positive doping cases among other things:

Now you might think the UCI would do the same again but lessons were learned from this. The UCI went away with its tail in between its legs after Katusha won back its licence with an appeal to the Court of Arbitration for Sport. In the hearing Katusha showed that it had moved to implement new “doping prevention” measures for 2013, including contractual matters banning riders from all drugs, even homoeopathic varieties, unless approved by the team doctor. The team undertook other methods including starting a power-profiling program to help detect sudden increases in rider ability, plus it was planning to join the MPCC. In full these measures run to pages of bullet points. The CAS panel agreed that these were substantive and “an important step” to satisfying the UCI’s concerns.

“The Panel notes that, in light of the measures adopted by Katusha, the Decision to deny the registration for 2013 appears to be grossly disproportionate”
– CAS ruling, paragraph 109, page 37

With Astana we’re likely to get a repeat. The team will show up at the hearing with talk of change, new policies and saying they’ve done everything by the rules. The only way Astana will take a hit is if management is shown to be involved in the Davidenok case. Otherwise the “lone wolf” gambit is deployed and team boss Alexandr Vinokourov will make pledges to work harder, they’ll be spending on new initiatives, more coaching support and so on.

“Punish Astana”
I hear lots of people saying it’s time to punish Astana. Understandable but hit the whole team and you could just punish riders who had nothing to do with it. There’s no provision in the WADA Code for collective punishments and little legal basis in many jurisdictions too. Will the mud stick to Nibali?

A voi la linea Enzo
It’s embarrassing for Vincenzo Nibali. Chances are he’s only met Davidenok a couple of times but there will be calls for him to speak out. But what can he say? Launch into a tirade shaming his employers and Kazakhstan? No, he’s in the impossible situation where anything he says is likely to be inconsequential. Saying he’s against doping is the obvious thing but the act of saying this would only link his high profile image to a story that frankly won’t get much traction. You’d probably never heard of Davidenok.

Nibali could slam his fist down on the table and demand the team adopts stronger anti-doping measures but what, when? Besides he doesn’t have much leverage in the team, this is Vinokourov’s project. Those who visited the Tour of Almaty saw just how much the team is Vinokourov’s vehicle and his status back home. Nibali’s only weapon is nuclear: to resign. But he’s on a big contract and losing, say, a million Euros because some imbecile on an U23 feeder squad went DIY with steroids is what you might call a big ask.

Break clause
I think Astana’s licence is safe but if the team get demoted to Pro Conti status some riders including Vincenzo Nibali are likely to have a break clause to allow them to move teams. But why end a lucrative contract? They’d get wildcard invites anyway. A rushed deal to join another team would be unlikely to pay more money as Nibali signed on very good terms and Astana is among the wealthiest of squads. It’s only if the stench is so bad that he has to move teams but for now we’re not there.

Conclusion
Embarrassing for Astana. But costly? Alexandr Vinokourov and others will need to present a strong case to the UCI’s Licence Commission and he might have to visit the CIRC for a long chat if he hasn’t already done so. I suspect we’ll see some crocodile tears and private penitence in front of the Licence Commission and they’ll escape with a formal warning.

Some fans might want it but fundamentally the UCI can’t say “we don’t like Astana” and deny the team a licence. Today’s news centres on a rider who wasn’t even with the pro team when he was caught. To deny the team a licence there would have to be proof the team management were up to no good, either being complicit in the doping or merely allowing a lazy culture where doping is part of the job. Proof.