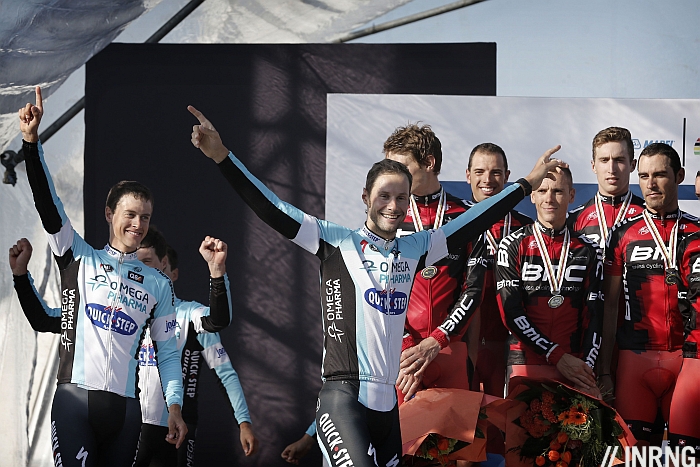 This Sunday sees the UCI World Championships in Ponferrada, Spain start with the team time trial. If a team time trial isn’t new, the format is still a novelty at the worlds after it was introduced two years ago and more so since it features pro teams when the rest of the week is about national squads.

OPQS have won twice in a row but this year’s edition looks more open with several teams able to challenge. Here’s an explainer of what is involved, why there’s no rainbow jersey for the winners and how it’s very different from the team time trials we might see in a stage race.

Pro Team Time Trial
Unlike the time trial and road races which have national teams, the team time trial is for pro trade teams, for example Omega Pharma-Quickstep, Europcar and Specialized-lululemon. The 18 UCI WorldTour teams are obliged to ride and then the following squads are invited:

Each of the above qualifies based on their position in the various UCI rankings as of 15 August. These are invitations and some have not travelled.

As we often see in a stage race there are big gaps between the top teams and the others but here the differences will be huge. It is nice to see teams coming from all around the world but they have no chance against the established World Tour teams and among the top-18 there are only a few teams capable of winning.

Team Size
There are six riders per team, small compared to the nine riders we see in a typical team time trial during a stage race. With this smaller team size the time will be taken on the fourth rider.

A smaller team means a different kind of race. In a stage race a large squad can carry a few weak riders – for example climbers who will shine elsewhere – in the slipstream but go down to six riders and there’s little room to hide and of course here the aim is to pick the strongest six rather than carry anyone for the sprints or mountains. It remains a technical drill where practice and perfection count for a lot but with six riders it will come down to the individual power of the riders much more than the collective power. No Rainbow Jersey
There’s no rainbow jersey for the world champions. Instead the six riders get a medal, as does the team manager. Then the team gets “the distinctive logo” on its jersey the following season and this is not for the six riders on the day, it is shared with the whole team. If a rider leaves the team then they don’t get anything for next year, for example Peter Velits and Sylvain Chavanel left OPQS for BMC Racing and IAM Cycling but their new kit was free of rainbow logos. Indeed theoretically it’s possible for the six riders who win the title on Sunday to leave the team over the winter but the squad will wear the logo the following year.

There’s talk of gender parity in the UCI but the opening event shows a shorter course for women. The women’s race starts at 10.00am Euro time and is held over a 36.15km course from Ponferrada. The men’s race is from 2.00pm with a 57.1km course. The roads are wide and there are few corners for men and women.

Last year’s route had a very long open and straight roads before some tight technical turns as they raced into Firenze, this is a little harder in places and has two climbs. The first is just 750m long at 8% and then the second looks more impressive on the profile above but it’s a gradual drag of 4-5%. Not hard but because strong riders can turn on the power it’ll expose weaker riders and the collective effort. Overall it’s a very fast course that’s exposed to the wind, a route for big powerful teams rather than stage race specialists. The Contenders: teams have until 4.00pm on Saturday to announce their six riders. Some squads have announced their riders although the roster can change so the following’s provisional. ProCyclingStats.com has the startlist and updates it faster than anyone else.

Defending champions Omega Pharma-Quickstep come with Tony Martin, Tom Boonen, Michał Kwiatkowski, Niki Terpstra, Peter Serry and Julian Vermote although the latter could be replaced by Petr Vakoč. Tony Martin is worth two men but the team isn’t as strong as it was last year whether on paper or form, Serry and Vermote are powerful but not the same engines as Sylvain Chavanel and Kristof Vandewalle who rode last year. They’re the prime pick thanks to Tony Martin but it could be close.

Orica-Greenedge are the next pick. Often a close rival the Australian team has been holding a dedicated training camp in Spain to get the riders working together perfectly. What the team lacks in star quality it’s got in homogeneity, this a squad with team pursuit in its DNA and a collection of rouleurs. Svein Tuft will be invaluable on the flat sections while Damian Howson and Michael Hepburn are young but experienced when it comes to team efforts. Can they stay the distance? If OPQS aren’t at full strength, neither are Orica with no Luke Durbridge for example.

Team Sky won’t save their season this Sunday but they’ve got a team to get on the podium. Bradley Wiggins leads with Geraint Thomas, Kanstantsin Sivtsou and Vasil Kiryienka with Dario Cataldo and Salvatore Puccio rounding out the team. To continue a theme this isn’t their A-team if Dave Brailsford had to pick the squad at the start of the year – no Chris Froome, Ian Stannard etc – but it’ll do.

Trek Factory Racing have a strong team with Fabian Cancellara, Jesse Sergent and Kristoff Vandewalle as likely picks. If only they had a proven rouleur who’s handy at hour long efforts?

Movistar are the stealth pick. They’re on home soil and won the opening stage of the Vuelta but the team’s image is more associated with attacking, climbing and stage racing. Now they swap out Nairo Quintana and Alejandro Valverde for the likes of Alex Dowsett while Adriano Malori won the final stage of the Vuelta.

BMC Racing look good. Rohan Dennis finished the Vuelta strong, Manuel Quinziato is time trialling well and Peter Velits won with OPQS a year ago. The rest of the team reeks of power. The only question is over their best rider as Tejay van Garderen’s form isn’t known. Surely he won’t be travelling to Spain just to make up the numbers.

Among the others Astana’s team isn’t known, they’re outsiders for the podium given the names available. Cannondale were the Vuelta surprise and Katusha bring Anton Vorobyev. Garmin-Sharp are currently 150-1 with the bookmakers, I can’t see them winning but they do have a slim outside chance at the podium. Finally Tinkoff-Saxo should be thereabouts, their status as one of the biggest budget teams requires it. Weather: sunny and clouds and a mild 21ºC and only a 4km/h breeze.

TV: The women’s races are being filmed and will be broadcast on some channels from 10.00am onwards. The men’s race should be live from 2.20pm Euro time onwards.

The broadcasting rights have been sold to various channels so you need to look up what is local to you on the PDF on the UCI website which has provisional listings.