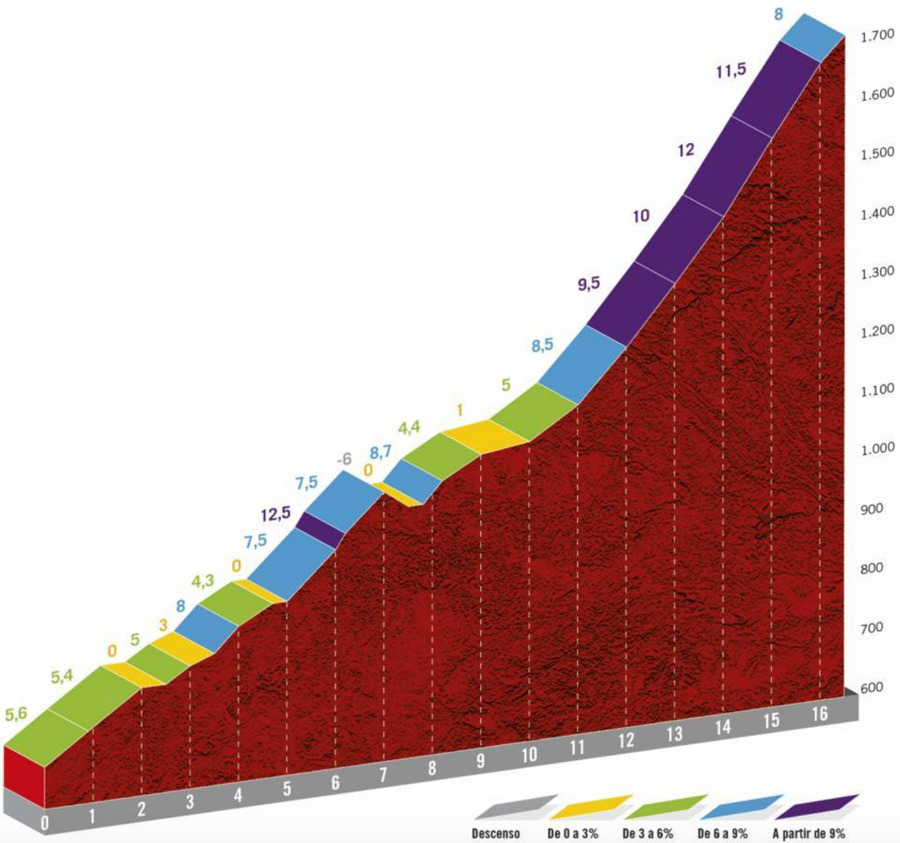 The Route: the SD-1 starts on the road between Castro and Pola Somiedo in the Asturias, in North-Western Spain. Look for the sign to Veigas. It heads south-east to the border of the Castile y Léon region and is 18.7km long at average of 5.8% climbing to a height of 1708m. The profile above from La Vuelta skips the first two kilometres from the junction.

“If Shakespeare had been here, his imagination would never have paid attention to the cliffs of Dover. The village, the meadows, the creek, the high and bare mountains are almost perpendicular or its forested hillsides, with goats jumping from rock to rock and cattle grazing peacefully below combine to form a magnificent whole.”
– Joseph Townsend, 1786

The Feel: it’s scenic from the start with the road winding along a river gorge. Townsend wouldn’t have been able to enjoy the roads but the geology remains the same and the tall cliffs and the Saliencia river has cut a deep channel. The road is subordinate to the geography but the climb does begin with a tunnel and it gives a clue of what’s ahead: nature and a touch of human engineering to make the road happen. It’s a relatively new road, at least in terms of being covered in asphalt, more of which later. The tunnels signal the road’s ambition, as does the wide and well-surfaced road… but not the accompanying traffic. Other feats of engineering include some big cuttings and consequently much of the road is in the shade if you tackle it early or late, be it the time of day or in the year because if the sun is low then the river keeps the air chilled.

You’ll warm up with the first steep section to a tunnel before the village of Veigas. Onwards and you’ll soon spot the road heading for a pinchpoint in the valley. Here, before the village of Arbellales, road rears up 10-14% sections to have you reaching for the low gears. Don’t sprint but you can push the pace because it’s short and there’s a brief descent coming up. It’s a chance to eat and drink and doesn’t last long. The road is steeper than the profile above suggests, 8.75% seemed more like 10-12% in places passing Endriga, another one horse village in the middle of nowhere. The road then eases, it’s not flat but 2-3% on the way to Saliencia where there’s a small bar and hostel which seems to serve walkers hiking in the Park. But no time to rest, now the road kicks up but continues its straight path up the valley and at times you only need to lift your head to see where the road is going far up the valley. A bit like the top of the Galibier the road pitches up to the pass via a series of bends as if the designers aimed the original road too low and had to make up altitude with a short series of hairpins. When the Vuelta visited in 2011 talk was of an Alpine climb but has a different feel. Yes there are pastures along the way and it gets a dump of snow every winter but the rocky hills picked clean of trees and covered in heather make it look more like Scotland or Scandinavia at times, especially once you’re clear of the villages. It has a remote aspect, these mountains seem reserved for the locals but you get quiet roads too. No groups of motorcyclists, no trucks wheezing up the passes.

If you’ve visited the Alps and Pyrenees enough and done the Dolomites and Vosges and wonder what’s next, then the Asturias could be the next big thing. While there’s a popular cycling culture in the region it’s not on the map for foreign cyclists,often drawn by famous climbs and race legends.

The History: it’s only been used once before in the Vuelta in 2011 and now it’s back for 2014. That day Rein Taaramäe won the stage from a breakaway, dispatching David de le Fuente on the upper slopes, probably the Estonian’s best win. Behind the GC battle was raging with Bradley Wiggins in red and Chris Froome on team duty, they kept the lead on the climb but the celebratory smiles above were premature. With hindsight Juan-José Cobo took 20 seconds that day… and won the race by 13 seconds from Froome.

Lagos? The Vuelta refers to the Lagos de Somiedo, the Somiedo lakes. They sit higher up and unless you want to ruin your cleats the visiting cyclist probably has to give them a miss. Road to Nowhere? The Vuelta stops at the top because it’s a summit finish. You’re unlikely to have a team car waiting for you so can you carry on? There is a road down the other side… but it’s a dirt track to Torrestío, roughly about three kilometres. I learned this the hard way after glancing at Google which showed there was a road down but without knowing it was a track. Encouraged by the sight of car tracks it’s ridable if you’re brave, desperate or after some fun. If anything it’d be easier to drive down than ride on a road bike, the surface is hardpack but with a generous sprinkling of stones; bigger than gravel but not quite rocks. There are a few places where the rain had cut gullies so it’s ridable but only fast if you’re on an MTB or off-road motorike.

Once you get to Torrestío the rural asphalt appears, a velvet conveyor. You soon have two options:

Each route is about 50km but if the northern route is a touch shorter it’s got an extra 1,000m of vertical gain and is the more scenic, a sense of being in the mountains rather than skirting around them. If you’re in the region then the Puerto de Ancares, another Vuelta gem is in the next mountain sierra but just out of range to combine the two.

Travel and Access: Ponferrada is nearby, the city is the host of the 2014 World Championships. For foreign visitors it’s a long five hour drive from Madrid. Santiago de Compostela has several European short-haul flights but is a good 3-4 hours away by car too.

If you visit be sure to pack warm clothing. The North-West of Spain is like Brittany to France, a piece of land jutting out into the Atlantic ocean and wet and humid conditions are possible. It’s still far drier than Brittany but don’t get visions of arid landscapes.