Tour de France: Who will win the Green Jersey?

Froome and Contador might be this summer’s duel but hopefully their rivalry is a slow story that develops over three weeks. The more immediate clash will see the sprinters in action from Stage 1 onwards. Here’s a look at the sprinters, the points competition and the likely green jersey wearers.

The sprint jersey? Technically it’s the points competition but the contest is so weighted towards the sprinters that green jersey wearer is most likely to be a sprinter. The full rules are set out further below if you need to know the maths but for now let’s run through the sprinters and others. Peter Sagan is the prime pick. He’s ridden the Tour de France twice and won the green jersey each time. He’s in form as we saw in the Tour de Suisse and this year’s route suits him thanks to several punchy stages. He’s unlikely to win a straight sprint finish but he’ll place and collect points. It might sound strange but the high level of sprinting between Marcel Kittel, Mark Cavendish, André Greipel and others will only suit him more. In the past Cavendish would win stage after stage but this time we might see a fiercer battle for the stage wins and consequently no single pure sprinter establishes a big points lead.

The Slovak’s obvious advantage is his ability to scale climbs that defeat the other sprinters. He did this last year and returns with a team dedicated to this goal, as we saw on the road to Albi last Cannondale cranked up the pace on the early climbs to leave Sagan unchallenged for the sprint finish. What can stop him? Let’s not carried away because those hillier stages have fewer points on offer. So on the days Sagan can win, his advantage is reduced. Still he’s got a substantial advantage. Beyond a crash or illness he can be his own worst enemy, “sinning by pride” as the French say with a tendency to be too bold. If the green jersey is really the preserve of the sprinters then who is the fastest sprinter? That’s what we’ll have to wait and see in the Tour as Mark Cavendish and Marcel Kittel race for the title in a field packed with talent. In fact “fastest” is an open term, having the highest top speed is one thing but it’s another to sustain power over the final 100, 200 or even 300 metres.

Mark Cavendish’s win rate is built on an acute tactical awareness and superb aerodynamics. He doesn’t have the most power but his ultra low position on the bike ensure no watts go to waste, especially given his “locked” track position: in slow motion he sprints like a swan with the legs paddling furiously while the upper body remains graceful; contrast with John Degenkolb. He’s got tactical variety, the ability to go early or late knowing an early dash means he’s so aero it’s hard to come past. In addition his OPQS team is there in his service with a dedicated lead out train and the Tour has been the big objective all year with the aim of winning the yellow jersey on the opening day. Last year he was on antibiotics at the start and I gather well into the Tour discovered he was riding with one crank longer than the other. The crank length can be fixed… but he’s fallen ill and is skipping the British championships this weekend. A precaution perhaps.

Is Marcel Kittel a challenger or the king of the sprints? Cavendish might win on reputation but last year Kittel won on stage wins. The opening win in Corsica was thanks to the late confusion sowed by the Greenedge bus but subsequent victories left no doubt. This year Cavendish got the better of Kittel in Tirreno-Adriatico but that’s been the only real sprint clash; the only other time they’ve raced together was the Dubai Tour but they never ended up in a sprint finish together. But did you watch the Giro? Kittel’s finishing power in Dublin was something to behold. Cavendish might have the high top end but Kittel has the raw power to wind up the speed, if the sprint slows – perhaps a tight corner – then the German can put his torque to the test.

Kittel is a tandem with John Degenkolb, a rare scenario. We’ve yet to see how this works in practice, will they divide up the stages, try a two-pronged sprint or what? Degenkolb has been having a fine season, the points jersey in Paris-Nice, Gent-Wevelgem and pushing Mark Cavendish close in the Tour of California.

André Greipel is often sprinting’s third man but he’s beaten Mark Cavendish in the Tour de France, got the better of Marcel Kittel and can cope with a late hill or two despite his “Gorilla” bulk. The Lotto-Belisol rider leads the victory rankings with 11 wins this year. Perhaps he’s got less star factor but he’s not slower and he too has a dedicated sprint train from Lotto-Belisol.

Next up we have series of names where it’s hard to imagine they challenge for the green jersey with consistent stage wins but we should see them in the mix for the sprint win. FDJ’s Arnaud Démare has looked like a big fish in a small pond at times this year, winning sprints by such a margin that you’d be forgiven for thinking he’d embarked on a breakaway. But he has scalped the big names too, he won the 245km Vattenfall Classic last year by beating Greipel and won the “Ride London-Surrey Classic” last year with its finish in front of Buckingham Palace.

Katusha’s Alexander Kristoff was a star of the spring classics thanks to his sprinting. Often a convincing winner he’s still not a regular sprint force and his wins have tended to surprise, he seems to be fastest rider left after a 250km classic in rough weather rather than a sprinter. Lampre-Merida’s Sacha Modolo is having a good season but up against Cavendish, Kittel and Greipel? Probably not but it only takes one open window to pounce. He won a stage in the Tour de Suisse, outfoxing Peter Sagan. 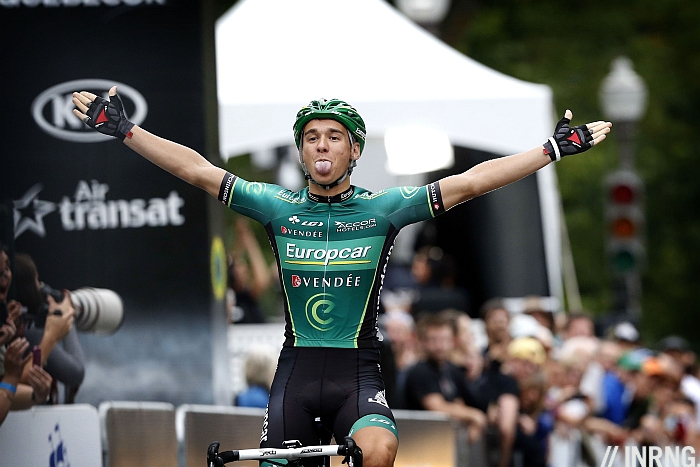 Europcar’s Bryan Coquard has the speed from track racing and has been winning plenty in France this year. But “the Mosquito” has struggled at the highest level to be in the right place as the race thunders towards the finish. If sprinting was 1km match event he’d be a strong pick but it’s not and the Europcar train is a regional stopping service compared to the OPQS and Giant-Shimano expresses.

Movistar’s team isn’t know yet and given they want to ride in the service of Alejandro Valverde will they pick a sprinter? If so there’s José Joaquín Rojas, a regular contender but rare winner while Juan José Lobato is the faster pick and he almost pipped Cavendish in the Tour de Suisse. Trek Factory Racing have Danny Van Poppel, fast and brave but just the one sprint victory this year in the Driedaagse van West-Vlaanderen.

And that’s about it…. scanning provisional startlists it’s notable just how many teams are not bringing a team sprinter. Presumably they know only too well they’d get beaten by some of the names above. We still don’t know if Elia Viviani and Tyler Farrar are riding, both could come close to a stage win but Viviani’s surely a clash with Sagan but neither are likely green jersey contenders. Meanwhile IAM’s Heinrich Haussler is more likely to try a breakaway and poach a win from there.

The Rules
The points jersey rewards the sprinters. Points are awarded at the finish line and at one intermediate point in the stage and the rider with the most points wears the jersey.

Intermediate Sprints
There’s only one per stage. With its hoardings, gantry, crowds and fixed TV camera the intermediate sprint in the Tour can look more impressive than the finish of lesser races. We will see riders sprinting if points are available but often a break will go and mop up the points. Can a climber win?
Some call the green jersey “the sprinter’s jersey” but strictly-speaking it’s the points jersey. You might remember Chris Froome lost the yellow jersey in the Critérium du Dauphiné but won the green jersey. Can it happen in the Tour de France? No. The points are heavily tilted to the sprint stages and the likes of Chris Froome, Alberto Contador and Alejandro Valverde would have to win every mountain stage going just be in contention. Last year the same points scale applied and Peter Sagan amassed 409 points to 110 for Michał Kwiatkowski, the highest placed GC rider in the points competition. The green jersey in the Tour is unlike the red points competition in the Giro or the Vuelta’s green jersey where a GC contender or a climber can be in contention during the final week.

Yellow > Green
If the climbers are unlikely to wear green, the sprinters can wear yellow. The winner of Stage 1 in Harrogate will wear the yellow jersey. There are no time bonuses so if there’s a sprint the next day and so on without a time gap then the jersey wearer is decided by adding up the total of finishing positions and the rider with the lowest tally wears the jersey. For example if a rider finishes 1st, 4th and 3rd after the first three stages their tally would be 1+4+3=8.

Summary
The points competition rewards regular, high placed finishes but with its bias to the flatter stages it’s reserved for the sprinters. In the past Mark Cavendish has been so far ahead of the rivals in terms of speed he’s been able to rack up a substantial points lead. But now the crown of best sprinter is a more open contest and we should see several sprinters sharing the points. Peter Sagan’s ability to win points in the stages where other sprinters cannot puts him as the prime pick of the maillot vert but this time his superpower skills will be challenged by Michael Matthews.

It’s a fierce competition and worth celebrating because the top sprinters rarely compete together outside the Tour de France with each on different race programs, calendars and objective. Predicting the stage winner and green jersey is merely an exercise in fun. The certainty is the clash between Mark Cavendish, Marcel Kittel, André Greipel, Peter Sagan, Arnaud Démare and the rest.

Next week a look at the riders in the mix for white jersey and then overall contenders.

Previous post: Film Review: The Accidental Death of a Cyclist