The Queen Stage of the 2014 Critérium du Dauphiné promises to settle this month’s duel between Chris Froome and Alberto Contador although it’s so close we might still need Sunday’s final stage. This is a tough day with the two hardest climbs saved for last. If that’s not hard enough the hot weather could break into thunderstorms for the finish.

Note today’s stage is forecast to finish later than usual. A breakaway of 16 riders went clear. FDJ missed it and tried a chase but it was too little and too late. With 20km to go the race started climbing and on Lieuwe Westra attacked on Côte de Marcellaz-Albanais and was joined by Pim Ligthart and later Jan Bakelants bridged across. Behind the rest of the group was reduced to individual efforts rather than a cohesive chase and game over for them. On the Côte de Ronzy Ligthart’s time was up as Westra put in another attack. The Astana rider was visibly stronger but Bakelants had him marked and it came down to a tight sprint. Bakelants won but even if he didn’t he would have been awarded the win because Westra was all over the road. It was a high pressure sprint, a win in a World Tour win is big but there’s more with Bakelants fighting for a place on the OPQS team while Westra will fear the postman. Behind Chris Froome crashed. The race had switched to narrow roads and his front wheel hit something. He said he wants to lose a kilo before July and he probably lost 100 grams of skin in the incident. The bunch waited for him, a sporting gesture although there wasn’t much to race for. 160km and 4,070 vertical metres. The start is flat as the road gradually gains in height to the Côte des Gets, a main access road that’s scenic but steady to pass the ski resort of Les Gets. After skirting the ski resort of Morzine the Col du Corbier is next. It’s not famous but should be familiar as it’s climbed for the third time in three years so riders should remember where the 10% sections are. A regular descent leads through the Abondance valley to the Pas de Morgins, climbed on the easy side. You might remember David Veilleux’s solo glory from here last year, the Europcar rider took a solo win and retired a couple of months later. The race crosses into Switzerland. A long descent on smooth Swiss roads awaits and then a steady 25km section in the valley, time for teams to get organised and riders to refuel.

Then comes the Col de la Forclaz which is as regular as the profile above shows. There are few bends or changes in gradient, it’s a well-engineered grade all the way as it passes from vineyards to pine forests. The descent is similar, with long fast sections but shorter, the race doesn’t surrender as much height.

The Finish: labelled “Finhaut-Emosson” this is the road that links the village of Finhaut with the hydroelectric dam of Emosson. It’s more an access road than a mountain pass. Either way it’s steep. As the profile above shows there’s a steep start followed by a lighter moment before the race begins the long ramps that lead up to the finish. These are steep sections at 10% with the gradient only easing in the hairpin bends. It’s uphill at a steep rate all the way to the line but not the 26% listed in the roadbook.

The Scenario: hoping for a high altitude repeat of Monday’s ferocious finish? You’d better cross your fingers because several factors point to a more cautious finish.

Sorry to play party-pooper. We should still see a classic mountain stage with a tough finish. Expect an early break to try and then for Team Sky and Tinkoff-Saxo to set the tempo to soften up the race from afar. I see a slim chance of an early break surviving today but it’d be good to see two races for the price of one, one for the stage and another for the race lead.

The Contenders: a duel between Chris Froome and Alberto Contador? Froome had the edge on the Col du Béal and the opening time trial and will want to prove things happen in threes. But has the crash and almost a week in yellow taken the edge off? Contador is the obvious challenger and only has to sit tight as Sky go through their riders like a space rocket using its boosters and then respond when it suits.

But what of the others? The final climb is selective so there’s little chance for a move to float away, any acceleration will have to be early or incisive. Vincenzo Nibali could take a risk with an early attack. It’ll be interesting to see what Wilco Kelderman can do. By now he should be shattered with the Giro and Dauphiné in his legs but he jumped away for a few extra seconds on Thursday’s stage to La Mure.

Andrew Talansky could be the surprise. He seems to do well racing in this part of the world and if Froome’s acceleration took him off guard on the Col du Béal he had the power to come back.

Now for some outsiders who will have to make their move early. All are pure climbers. Leopold König is NetApp-Endura’s key man. Séb Reichenbach is on home roads and rides for Swiss team IAM, motivation can’t be higher. FDJ need Kenny Elissonde to save them from an invisible race. Igor Anton who came good on the Zoncolan stage of the Giro. Cofidis’ Dani Navarro, the subject of an informed whisper or two,  is another.

Weather: warm and sunny but cloudier and cooling with temperatures of 24°C (75°F). The clouds will billow up in the afternoon with the chance of a localised thunderstorm.

TV: a change with the finish forecast for 4.45pm Euro time. If you’ve been able to watch it during the week you need to adjust your body clock by two hours.

Be sure to tune in for the final hour which includes the last two climbs. The finish is particularly scenic.

Switzerland? cheeky to race into Switzerland on the day the Tour de Suisse starts. You might remember the Dauphiné crossed into the same area last year. The Portes du Soleil is world’s second largest ski area comprising 13 resorts spread between the two countries. A big winter-sports destination but also one trying to attract tourists in the summer and ASO has signed a long-term deal with the area to take the Dauphiné and Tour to the region.

Canadian French Fries: talking of deals, ASO have just signed agreement with Canadian firm McCain which becomes the “official supplier of French fries to the Tour de France”. Thousands of oven gloves will be given out by the publicity caravan. There’s already Cochonou as “official supplier of saucisson” (cured sausage). Surely it’s a matter of time until a deal is done with a lard manufacturer?

Talk of fatty foods might make you think chocolate but ASO has a huge deal with Nestlé in place already, only its for the promotion of other brands like Vittel mineral water and Nesquik milkshakes. In recent years Powerbar has been the official energy provider. But the Swiss company has sold Powerbar so it remains to be seen if this more sporting brand remains at the Tour. 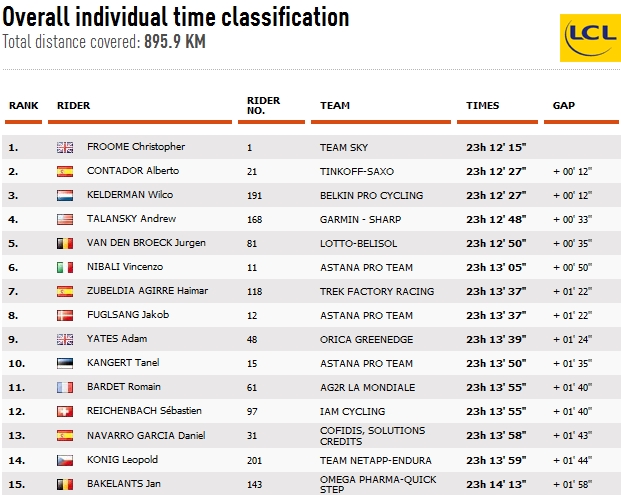