Many riders have marked today as the obvious day for a breakaway. With over 100 riders now over 10 minutes down on GC  riders there are a lot of riders with a ticket to ride but only one winner awaits in La Mure. A breakaway win for Katusha’s Yuri Trofimov. Riding for Bouygues Télécom (now Europcar) he won a stage of the Dauphiné in a similar way in 2008, waiting for the final climb before going solo and then descending to the finish line but it was last summer’s Tour de France that was more instructive. He said he remembered the Col de Manse and the need to sit tight during the early part before using the steeper sections to distance his rivals. National stereotypes are risky things but Trofimov is the archetypal Russian racer: a stony-faced stoic. He crossed the line with his jersey unzipped – no matter, Katusha’s sponsors aren’t in for the publicity – and seemed underwhelmed by the media attention following his win.

Beaucoup cols offer the chance to challenge Kévin Réza’s mountain points lead. The first is the Col de Manse and surely an ideal place for a cycling enthusiast to live. The Dauphiné came through yesterday and so did the Tour de France last year; and twice too. Today’s stage is similar to the first half of Stage 18 from the Tour last year. We start with the Manse and then the race crosses the Valbonnais, the heart of the French Alps. The Côte du Motty – better labelled as the Rampe du Motty last summer – is just one of several short climbs.

The race reaches the finish in La Mure after 128km but heads out for a 61.5km finishing loop. It’s here that the hard work begins with the Col de Malissol and Col de la Morte offering tough climbs. The official distances listed above underestimate the length of the climb, the Col de la Morte for example is really double the length but the steeper slopes are reserved for the top where the race approaches the modest ski station and a short flat section across the plateau. Then follows a long and fast descent under tree cover with a series of hairpins.

When the route was announced the deadly Laffrey stood out. But it’s not the Rampe, the infamous accident site. Instead the race doesn’t drop down to the valley floor, instead it hugs a tiny balcony road. 6km at 6% average doesn’t do it justice, the road is irregular, rough and narrow and steeper in places, the opposite of average. There are 20km to go over the top as the race picks up a larger road to the finish.

The Finish: the race heads across the small town of La Mure before doubling back. The final corner is at 250m to go and a tight turn, the winner will need to be near the front of the group in this bend.

The Scenario / Contenders: this is the day for a breakaway. There are now over 100 riders more than 10 minutes down on Chris Froome meaning they pose no threat to Chris Froome et al.

Thomas Voeckler tried an attack yesterday on the Col de Manse. With Yuri Trofimov 2m30s up the road it looked idiotic and Voeckler was quickly caught and dropped. But what if there was a point to it and he was pretending to be out of shape, putting on a show only to “explode” just in front of the peloton and TV?

As for the others today’s winner needs climbing legs so discount those without a mountain pedigree. With a scattergun let’s name Arthur Vichot, Winner Anacona and Ramunas Navardauskas but these are random picks. If you’re tempted to pick Simon Gerrans it’s a good call but tomorrow’s preview will explain why he’s a shoe-in for Stage 6. If Katusha are having a good time, why not Egor Silin? The Russian was a top U-23 rider and poached from under the nose of Katusha to ride for Astana but bombed for two years but now he’s looking back.

If the breakaway fails the default picks are Tony Gallopin and Adam Yates, both are able to follow the GC guys and win the sprint from the group.

Weather: another hot and sunny day but a touch cooler with the altitude with a max of 3o°C (86°F).

TV: The finish is forecast for 2.45pm Euro time. Do: read the piece by Paul Kimmage that mentions the Côte de Laffrey as he describes former RMO team mate Thierry Claveyrolat, the “Eagle of Vizille”. I’ve linked to it before and will link to it again as it’s a powerful story.

Don’t: bring back a rider from a team imposed rest/suspension with little accompanying information. Nobody knew exactly why Sergio Henao was stopped from racing and now, having been shrouded in doubt, nobody knows what’s convinced the scientists and the team that he’s ok to return to the Tour de Suisse. Sharing the data with the UCI and WADA’s laudable but as well as science there’s a PR battle and with it the team needs to convince those who don’t wear lab coats, especially the French public.

Team Sky have probably missed a pedagogic trick to inform and even bore fans with scientific lectures on values, both haematological and educational. The team said in a press release they hope that in due course a paper will be released but in today’s world of social media judgement and with the Tour de France just weeks away, hoping an academic paper might appear in due course is asking fans and sceptics alike to trust the team. Currently much of the news about Team Sky comes from the outside, Wiggins told L’Equipe he was unlikely to ride the Tour de France and the same newspaper got the scoop Henao could lead in the Tour de Suisse. 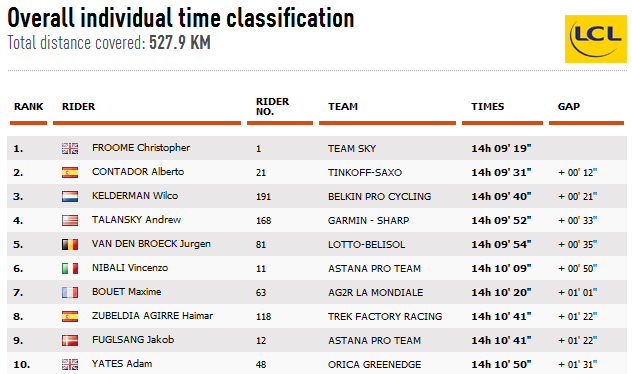