The race heads to the Alps with a classic stage finish in Gap with the Col de Manse followed by a steep descent to the finish. It’s a tricky stage with the action packed in the finish. There’s also a new leap in the evolution of TV today.

Stage 4 Wrap
Three riders went for the breakaway. Their chances were so low that the bunch almost had to gift them a lead and the race quickly fell behind schedule, delayed by generosity and torpor. Try as they might to avoid it, the bunch caught the trio with 20km to go, too early as it invited attacks. Jens Voigt profited from the lack of sprint teams and perhaps told to go for it after fellow Trekker Giacomo Nizzolo had crashed out half an hour before. Voigt was joined by others and this break did have some good ingredients but they were reeled in. A sprint finish but not the one we expected. FDJ’s sprint train was derailed by the tricky run-in: perhaps they didn’t scout the finish, certainly they were swamped and instead of a démarrage we got an enraged Démare. Nikias Arndt of Giant-Shimano was late into the final bend but cut a tight line and kept the power going to win. Their plan was to launch Reinardt Janse Van Rensburg but in the chaos Arndt was in the right place and went for it with that rarity, a seated sprint. Was he inspired by Chris Froome?

A classic route to the Alps, the race heads to the olive bastide of Nyons and then takes the Eygues valley on the road to Gap. This is a long wide road with many turns and false flats. The Tour, Dauphiné, Paris-Nice have all used the same road. After 140km the race reaches Gap but does not cross the finish line. Instead it starts climbing the Col de Manse.

It doesn’t look like much but when it was used in the Tour de France Rui Costa soloed away. Behind, by the time the race got to the top, we had a select group of Chris Froome, Richie Porte, Alberto Contador, Roman Kreuziger, Nairo Quintana, Joaquim Rodriguez and Bauke Mollema. One reason why it’s so selective is because the descent is so feared, riders want to speed up the climb because they know a gap can be preserved on the descent. Today’s descent is not the same as last summer but it’s still a tricky road that’s narrow and winding with uneven gravelly tarmac.

The Scenario: at the risk of being obvious, there are three scenarios:

Which of the three? We’ll see who goes up the road. In the Tour last summer everyone knew this was the day for a breakaway and consequently when a giant move went it was reeled in by those who’d missed it. This morning will see a lot of team managers ordering someone, anyone to get in the day’s break and those that fail will be tasked with the duty of chasing the move.

The Contenders: if a breakaway goes think of a rider like Thomas Voeckler or Simon Gerrans. Other picks would be FDJ’s Artur Vichot or Giovanni Visconti but we’re going on reputation, the form is uncertain.

A safer pick might be Tony Gallopin. 15th on the Col du Béal he’s got a fast sprint and if he can get to Gap with a small group he’d be hard to beat. Vincenzo Nibali could go full shark on the descent but it’s not the longest drop, you can take seconds but maybe not enough to go solo and then hold off the chase during the flatter run through town.

Weather: hot and sunny but a touch cooler than yesterday temperatures reaching 32°C (89°F). The tarmac will be melting, especially on the final descent.

TV: L’Equipe reports France Télévisions have an extra motorbike on the race today armed with La Superloupe, an HD camera that films images at 500 frames a second. The idea is to find new images and details, whether a wide angle shot that can still pick up tiny details like facial expressions or to zoom in on things the camera never sees like a frame flexing in the sprint. Like all broadcast tools the secret is in the production but this is promising.

The finish is forecast for 2.40pm Euro time.

It’s live on French TV and Eurosport which means there should be a stream to watch, see cyclingfans.com and steephill.tv for a feed. The racebook says it’s  around the world including NBC in the US and SBS in Australia. Subscribe properly rather than use a pirate feed and you’ll be treated to HD images.

Do: leave a comment below if you can explain why French roads melt in the summer. The obvious answer is because the authorities seem to lay roads with tar that has a low melting point: the question is why they opt for this defective solution. It’s common in June and July in France but other countries don’t have the same problem. It’s bad for a bike race but must be lethal for others, especially motorcyclists.

Don’t: think today’s finish is the same road as as last summer’s Tour route, nor the 2011 Tour route when Andy Schleck resembled a puppy trying to descend a staircase, nor where Joseba Beloki crashed prompting Lance Armstrong to plough a field. Instead the road comes off the Col de Manse to turn right earlier, taking the road to Romette and not Rochette. 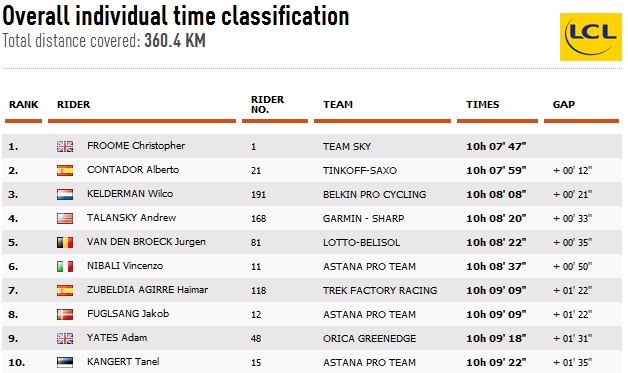