A fast and flat finish, today’s stage says bunch sprint in every language. But the race has a shortage of sprinters and sprint trains. Could Chris Froome go for a third stage win in a row? Just joking. Not bad for a Monday in the Auvergne. As predicted the day’s breakaway allowed Kevin Réza to collect enough mountain points but when the group hit the final climb their lead melted like ice dropped onto the melting tarmac.

Team Sky set the pace and it all looked so familiar as the group thinned. However like all good stories the script had a few surprise twists. The first element was Chris Froome taking a puff on an inhaler to prompt a lot of exhalation on Twitter. Then Richie Porte cracked. Sky seemed to be setting such a pace that they were burning through their own riders too fast and with 5km to go Chris Froome was isolated. His response? Splendid isolation. He attacked with a seated effort and a cadence so high that probably only those used to dealing with big numbers, like astronomers and economists, could understand. Contador followed immediately. Then came another acceleration, this time out of the saddle and it looked as if Froome had misjudged the finish and was sprinting for the 5km to go banner. Only the moves kept coming.

Froome’s style is such that every move is exaggerated. Of course he was giving it everything but it showed to the point where Contador, usually so light on the pedals, appeared slow and heavy in comparison as he tried to stay on the wheel. Even the Spaniard’s biceps appeared chunky in relation, and wearing the green jersey it almost gave the impression of a sprinter temporarily trying to track Froome. But Contador could not sprint, he was unable to get past Chris Froome and his sharp elbows. It was spectacular duel to watch with Froome making all the moves but Contador able to respond.

Behind Richie Porte had blown but so had Tejay van Garderen, Romain Bardet, Michał Kwiatkowski, Ryder Hesjedal and Jean Christophe Péraud. All have questions to answer but don’t write anyone off yet, it could be a jour sans, a feeding problem or even the shock of the heat. We’ll know more by the end of the week. Did Vincenzo Nibali lose too? Undoubtedly he lost time but he wasn’t so far off that Alexandr Vinokourov would start letter writing again.

Andrew Talansky impressed, dropped by Froome’s acceleration he ground his way back up even tried two attacks, perhaps a touch too much pride but he had the energy to do it on a day when others were lucky to follow. Wilco Kelderman and Jurgen Van Den Broeck also had a great day. There were several young riders who did well like Adam Yates and Sébastian Reichenbach. The longest stage of the week at 194km. Some altitude with the race nudging over 1,000 metres as it crosses the Ardèche region via wide roads and with little gradient, this isn’t the fertile terrain needed for a breakaway to stick.

The Col de la Mûre (also known as the Serre Mûre) marks the transition from plateau to valley and the race plunges at speed down to the Rhône valley where it’s just under 40km of flat road to the finish as the race runs parallel to the river, look out for the nuclear power station to signal the finish is fast approaching and one little extra is three level crossings which could cause trouble.

The Finish: flat with several urban street furniture obstacles and then an awkward dog-leg right hand turn at 500m to go. The race speeds towards the large suspension bridge over the Rhone but turns right just before into a pinch point.

The Scenario: this is the day for the sprinters with the most favourable route. As ever though it is not the roads that make the race but the riders and the bunch is light on sprint teams willing to chase. FDJ are the logical pick but they lost workhorse David Boucher yesterday. Other sprint teams include OPQS for Gianni Meersman, Trek Factory Racing for Giacomo Nizzolo and Orica-Greenedge for Leigh Howard. When the morning breakaway goes watch to see who is in it because should a couple of sprinters teams have riders up the road they won’t work.

The Contenders: while everyone was watching the Giro FDJ’s Arnaud Démare was winning the Four Days of Dunkirk thanks to a variety of sprint efforts. He won uphill one day and on another was so far ahead that spectators standing by the finish line probably thought he’d attacked. With this in mind he and his team need to get the sprint right, it’ll be a lot harder to win so easily and a lot easier to lose it by bungling the leadout or launching too soon.

Giacomo Nizzolo was close in the Giro and that alone is reason to watch him today. Orica-Greenedge’s Leigh Howard came in late yesterday, if this was deliberate then he’ll have extra fresh legs today and he is a fast finisher. Gianni Meersman might find the finish too flat for him but OPQS will take what they can get and he should be there. The same for Reinardt Janse Van Rensburg, another one of Giant-Shimano’s sprinters but also versatile on tough terrain and Nikias Arndt is as fast too. Europcar’s Yannick Martinez has rogue DNA, the son of climber Manuel and brother of MTB grasshopper Miguel, he’s a sprinter instead and had a great Paris-Roubaix. There’s Thor Hushovd, he can sprint but will he?

Weather: a copy and paste of yesterday, hot and sunny with temperatures reaching 34°C (93°F) which means the tarmac will be melting in places.

TV: the finish is even earlier today with a forecast arrival for 2.40pm Euro time.

It’s live on French TV and Eurosport which means there should be a stream to watch, see cyclingfans.com and steephill.tv for a feed. The racebook says it’s  around the world including NBC in the US and SBS in Australia. Subscribe properly rather than use a pirate feed and you’ll be treated to HD images. 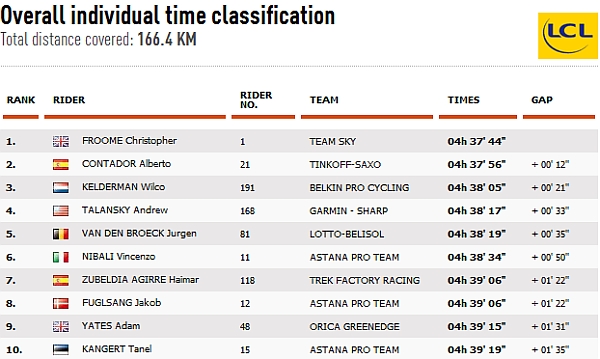