The Steeper The Climb, The Easier It Is Monte Zoncolan awaits the riders in the Giro. Climbs like the Stelvio, Galibier and others have rich history but Monte Zoncolan’s as new as you get. Although it had been climbed before from Sutrio it was only in 2007 that the road from Ovaro was used with its infamous gradients.

But what makes a climb tough? The steeper the slope the more the contest is reduced to a rider’s power to weight ratio, stripping out tactics, roadcraft and everything else that makes road racing such a subtle contest. In qualitative terms, it’s steep enough for mechanics to follow riders on motorbikes for fear a car could stall on the way up. It’s so steep it’s become a benchmark, when a new climb is added to the Giro the reflex is to compare it and a new climb with steep roads might be billed “the new Zoncolan”.

In cycling we talk of climbing but this is not the technical ascension of a cliff face where each foothold must be assured, where falling rocks and crashing ice endanger lives. As tough as the climbs might be, they are merely roads. Gearing solves everything.

Shimano Acera, the entry level mountain bike groupset from the Japanese manufacturer has a triple chainset where the inner chainring has 22 teeth and a cassette for the rear wheel with 34 teeth. For all the hype about the Zoncolan most healthy people could make it up to the top, it’s only a matter of time. It’d be hard on a hot day too.

For the Giro the gear ratios are different but performance is all about a different kind of ratio: power to weight. Aerodynamics barely matter, almost all the power produced by a rider is going to fight gravity rather than air resistance. The power a rider produces is divided by their weight and this ratio is by far the greatest determinant of climbing speed. A fearsome mountain is reduced to the expression of W/Kg.

You can measure a rider’s power output in a lab with on an indoor bike and if you take their bodyweight and the weight of their bike and clothing then you should be able to get the precise power/weight ratio. Put all of the Giro’s riders through this lab test and you could rank their ratios. The result on a very steep slope should be the same. Seen this way even the most fearsome climb is a replica of sterile laboratory. 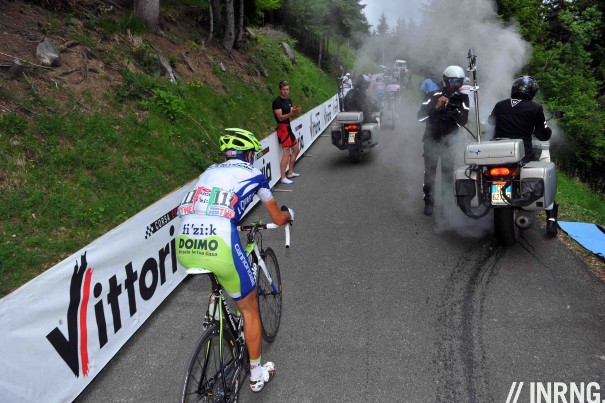 Even the moto blows up

But luckily it’s not a lab and humans are prone to error. What makes the Zoncolan so important is that a rider has to determine if they can follow their rivals. If they find a rival has a superior W/kg ratio then they risk cracking and consequently losing a lot of time. Each rider will be playing aerobic poker, trying to follow and perhaps set the pace all while bluffing whether they’re in the red or not. This is a much more measured contest. There are few big attacks, just changes in pace.

On such a steep riders rarely need to attack as the strongest will just find the others fade away, unless someone tries to follow another rider and goes into the red, in which case they’ll blow. It’s here that the steep climb can open up big gaps because if a rider gets into trouble there is no moment to recover, they might force themselves to hold a wheel but this risk can backfire if they crack. To avoid this a rider needs only to look at their power meter display on their handlebars and ride to the numbers, using gearing to keep the legs turning like a metronome to a pre-set rhythm.

No lab
The Zoncolan and others can be so reductive that we lose tactics, attacks and the chance for a suffering rider to cling on by bluffing. But thankfully we keep the woodland, the rough roads and the scenery, it’s what makes the race and why nobody would watch a lab test live on TV. One reason the climbs attract such big crowds is because the riders pass by so slowly that spectators can see the pain.

Conclusion
The sport loves to hype up the difficulty of a climb like the Zoncolan and it’s true, it’s unmissable TV because it’s so hard. But the steeper the climb, the more it is reduced to a contest between power and weight, especially with today’s choice of gearing. Tactics, following the right wheel and other matters have a lesser role, for example there’s no point sending a team mate up the road to act as a relay to pace their leader on the slope. It hurts but a steep climb is a simpler test than we might imagine and one we could almost replicate in a lab or gym. The steepest climbs can be better explained by sports scientists than winged angels or mountain gods.