Another day, another mountain stage. It’s easy to just see more peaks on the profile but each stage is different. Today’s A maxi-breakaway. 20 riders got away and Stefano Pirazzi won thanks to a late attack and celebrated with a gesto dell’ombrello to the media who had been criticising his riding style (endless attacks, no results). He made it three for Bardiani-CSF. Meanwhile Four for Neri Sottoli… as in the number of riders left in the race. The fluo yellow team is in danger of becoming invisible. 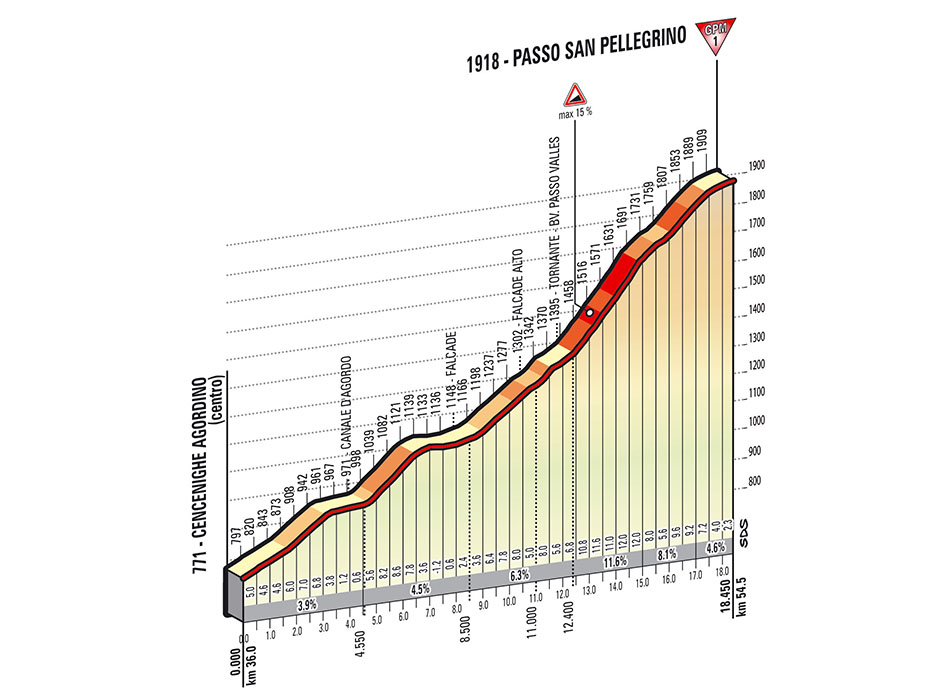 The Route: a case of the old and the new. The stage begins with the classic Passo San Pellegrino, 18..5km long at 6.2%. It sounds gentle but the upper slopes are much steeper. It might not be decisive but it adds a lot to the day’s effort. It’s followed by a regular descent.

The Passo Redebus is the new addition. It goes up in two sections, the graphic above shows the top part, almost five kilometres at 10%. Short but irregular and it serves to soften up the legs.

The Finish: 13.4km at 8.4% but again the average is not the story; or at least the mean slope is 8.4% but the mode seems more like 10%. The climb to the Rifugio Panarotta (“Panarotta Mountain Hut”) starts in Levico Terme and it’s gentle out of town. But soon the hairpins begin and so do the steep slopes.

The road rises all the way to the line with a slope of 8.5% in the final moments.

The Scenario: the last chance for a breakaway. With the time trial, Zoncolan and the final stage to go this is the last obvious pick for a breakaway, especially as the GC candidates could sit tight ahead of tomorrow’s giant mountain time trial. The Contenders: it’s hard to select breakaway riders but if there’s one rider who wants to win a stage, surely it’s Nairo Quintana? He won the other day in dominant fashion only to find the subject was flags, rules and everything but his win. But he might have to be patient and win tomorrow or on the Zoncolan. He needs the win to calm the storm.

Weather: cloudy with a temperature of 23°C in the valleys but cooler and the chance of rain higher up.

The race is due to hit the final climb around 4.20pm Euro time but tune in before to see the approach to the climb and see who is fighting for position. As ever the finish is expected around 5.10pm.