Intro: this is a guest piece by Vincent Luyendijk. The blog has often looked at changes in pro cycling and related commercial issues like TV coverage and but what of the audience and the newcomers to the sport? Vincent Luyendijk takes a look at those who are riding but not racing, the newcomers to the sport who will be tomorrow’s competitors, cycle store consumers or Tour de France audience.

At the start of the new season it is always exciting to see what’s new. Is it easy to recognize the new outfits? Which rider is the new talent to watch? How do new training methods and technology work out for the different teams? At Paris-Nice the oldest rider winning a stage was 25 in Arthur Vichot, it shows that a new generation of cyclists is taking over.

What I am going to write about is something entirely different for the start of this new season. It is not about the new generation of pro’s winning at Paris-Nice nor about new training methods like Tinkoff-Saxo is telling about Contador. I would like to talk to you about the real new style cycling, Cycling 2.0, not to be confused with new style cycling.

In my opinion there are generally five different young groups of new cyclists on their way to becoming the in-crowd:

Group 1 : ‘I love to ride my bike but I don’t give shit about cycling on TV’
First of all, this group consists of a very special type of riders for someone like me who longs for the season to start and drops everything when there is a race on TV. I will sit on the couch and relish every minute. Even if it is a race on local TV and I don’t know any of the riders competing in it. Taking this into account I was very surprised when I invited my friends at Soigneur magazine to watch Liège-Bastogne-Liège together at the end of April 2012. To make the fun complete I made sure I had stocked some Belgian beer, brewed at the bottom of La Redoute. All the necessary ingredients for a perfect afternoon of bicycle fun were united. But… my friends at Soigneur had a different opinion. They preferred to have fun riding their bikes instead of enjoying it on TV. They decided to go for a ride and not just an easy ride, but 120km in bad weather. There has been some research on this new breed of cyclists. In the Netherlands alone this group of ‘sporty riders’ is conservatively estimated to count over one million riders.

Group 2: ‘Women on bikes’
Within this first group of riders there is a sub-group that can be differentiated. We’ll call them ‘Women or Chicks on bikes.’ I see nothing but advantages coming from this group of women on bikes. You may find that I’m a sexist, but to me a road bike has the same effect on women as high heels or a beautiful car next to her. I am not alone, the internet also loves it. It has become a true hype to share pictures of beautiful women on bikes. I would like to say, before you get the wrong idea, that I have great respect for female bikers. Most of the ones I ride with easily drop me, especially uphill. Of course women on bikes are not a new phenomenon. For example there was an Italian woman who rode the Giro d’Italia. This woman, Alfonsina Strada, was there to attract attention and publicity, but she was strong as well and didn’t finish last. The novelty is not women on bikes, but the massive number of women who are discovering the bike.

Last week, for the first time in my life, I saw a group of eight people riding bikes. This is nothing out of the ordinary for a popular local bike route, but all eight were women, not one guy to be seen. To me this group of only women is the true new style cycling. And what makes it even more interesting for men; they can talk about complicated things like components, gears and power output. The fact that women have really discovered cycling is obvious not only on popular bike routes but also at granfondos and in bike shops. At the Amstel Gold Race granfondo the percentage of women participating has risen from a mere 1.7% in 2002 to a staggering 15% in 2012. The major bike brands have also noticed the trend and are developing ever more specific models for women.

Group 3: ‘Petrol heads who used to be cagers’
From women on bikes we go to a very special group of new kids on the block. Currently every modern Mayor of every metropolis in the Western world has worked out a Bicycle Master plan. They saw the light and now the bicycle is the ultimate solution for everything. Of course the bicycle makes for:

These master plans were developed mainly to get people out of their car and on a bike. Let’s take New York for example, a city that is developing bicycle lanes at high speed, something unthinkable a couple of years ago. Currently 1,500km of bicycle lanes have been constructed, there is a major bike-share program and all inhabitants of what used to be called New Amsterdam need to get on a bike. As quickly as possible.

Meanwhile they have set up classes to get this ‘new invention’ to a public beyond the early adopters. Grown-ups get lessons on riding a bike. And although every month there are American delegations who come to the Netherlands to suck-up knowledge from the world’s leading bicycling experts, in the bicycling reality of Amsterdam there is one important first rule during these bike lessons… “Rule #1: Don’t ride like the Dutch”. The Dutch are not only known for the number of people who ride bikes but also for their poor observance of the rules of the road. 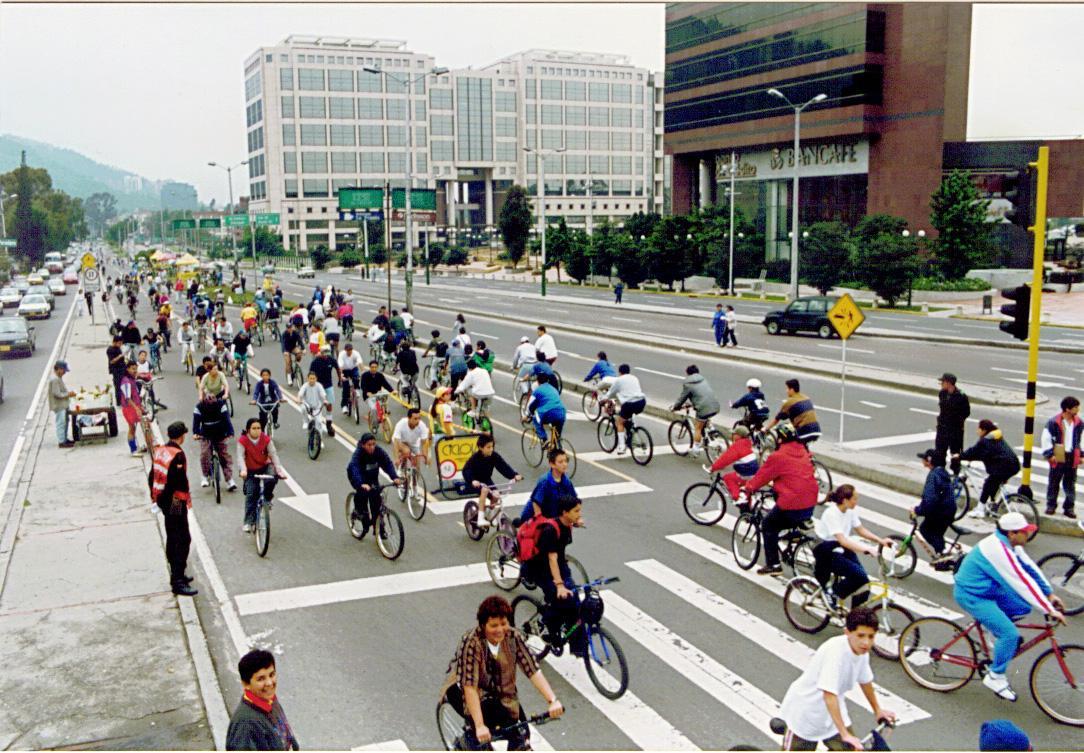 Besides bicycle master-plans, mayors also provide space for recreational bicycling. In a city like Bogota the inner city is closed down to cars on Sundays so everyone can ride a bike. This movement is called La Cilclovia (pictured). With 25% of daily trips by bicycle, the Dutch example is still Utopia for countries like the USA and the UK (both less than 3%). But looking  at all at all of the plans and space for the bicycle and the growing  number of e-bikes, all of the lights seem to be green to allow a big  group of people to start commuting by bike. This will give them freedom  and increase their health and happiness. Everything is set for a large  number of cyclists to join the early adopters in the coming years!

Group 4: ‘Famous brands and famous people’
The popularity of the bike today can also be seen in trending culture. You don’t need to look very hard to see this. In the eighties and nighties there was bike in the apartment of Jerry Seinfeld but he never rode it nowadays bikes as decoration are everywhere. Whether it is a commercial, shop or magazine, road bikes are often used as a trendy means of decoration. A great example of this trend is when big brands, who have absolutely no connection to bicycles, take the bike’s popularity of very serious:

Besides brands in the clothing industry, car manufacturers have also entered the world of the bicycle. They understand the bicycle is a growing popular choice in the transportation chain. BMW, Audi and Porsche all developed a bicycle. Other brands go one extra step to integrate the bicycle, with Smart offering an electric bike and car to get around town for example. Or Pon, the Dutch importer of Volkswagen, who recently purchased several bike brands among which Royal Gazelle and high-end road bike brand Cervélo.

Besides these brands, celebrities also like to be seen on bicycles nowadays. In the last week or so I spotted pictures of Jamie Oliver, James Bond, McDreamy, John Kerry and Obi Wan Kenobi on a bicycle. And during the recent Winter Olympics in Sochi even the Dutch royal family was pictured on a bike, but the bicycle is no longer limited to the Dutch elite.

Group 5: ‘The African people we were taught could only run fast
The last group of new kids on the block comes from far away. As cycling fans we all know that the pro cycling peloton is experiencing its second Anglo-Saxon era. With Team Sky winning the Tour two years in a row it seems to be peaking. The first Anglo-Saxon era started in the eighties with riders like Phil Anderson. This was at a time when other Australians didn’t understand you could make money as a cyclist.

Besides an Anglo-Saxon era we are also at the start of a second Latin-American era in cycling, the push essentially coming from Columbians. The first era was at the end of the eighties with riders like Herrera and Parra. Nowadays a great number of very talented riders are dying to color all of the big races in the coming years.  But while these two geographic groups are entering their second era, there will be one continent living its first era, and that is Africa. This is without taking Chris Froome into consideration. For me he doesn’t count as a Kenyan, although he was born and raised in Nairobi.

Currently a lot of hard work is put into getting native Africans on bikes. It is very important to mobilize people, not just in metropolises, but also in the rural and urban areas of Africa. The World bicycle relief for example, is doing a great job of mobilizing the local people there. Cycling solves a different problem there than in global western cities. Cycling is very important to local people, it helps children save time which they can use to go to school, and adults have easier access to work and better hygienic facilities.

While the bike is on the rise among commuters in Africa, the sport has also known growth in this last decade. There are tours being held in countries like Burkina Faso and Gabon where millions of local fans line the road. Some of the local cyclists have already made it to the pro peloton. La Vuelta of 2012 saw Daniel Teklehaimanot from Eritrea as the first African to ride a grand tour.

To understand the potential of African cyclists I looked at runners. When looking at athletes you’ll notice that 10 years ago athletes from Africa did not yet dominate marathon running. The first time a Kenyan won the Olympic marathon was in 2008.  Improvement in infrastructure and training over the last ten years helped them on the path towards domination. The fact that 278 Kenyan athletes passed the time limit (2h15) for the London Olympics is a clear indicator. In the end international regulations only allowed two Kenyans to start.  But it also shows that there is a lot to be expected from them in another endurance sport; cycling.

Conclusion
Several new groups of cyclists are out there, and they are becoming more and more in-crowd. It is heart-warming to see more people enjoy cycling as a means of commuting, recreation and sport and I am convinced we will very much enjoy all of them in the coming years. Finally I would like to share a prediction with you:

This blog is derived from a presentation Vincent Luyendijk held in Utrecht, the Netherlands. It was translated and adjusted for inrng.com

Vincent Luyendijk is the owner of IN10 communications and Soigneur magazine. His mission is to connect people and brands in a relevant way. He sees great opportunities for brands and people in the world of cycling. This believe in opportunities for example lead to a Bicycle Masterplan which he works on together with Frank Kwanten of First Echelon. Both of them will blog for the INRNG every now and then.