The Signs of Spring 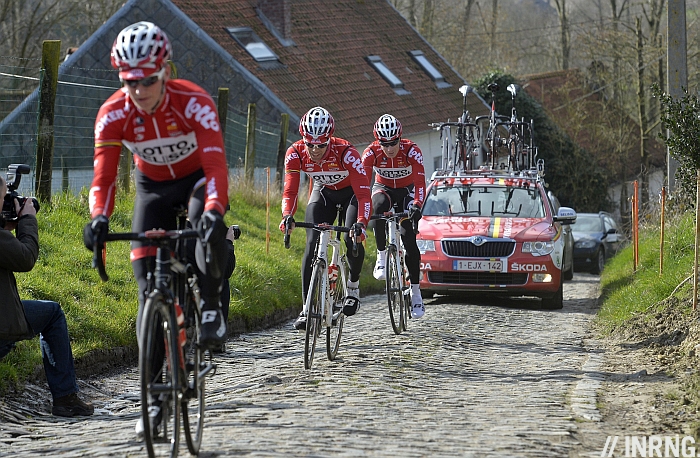 In Belgium there’s no need to look for flowers and buds on the trees or listen out for birdsong to tell spring is coming. Instead there are flashes of green sidewalls and the sound of Rodania. As the spring classics approach, so the annual rituals repeat themselves.

This week teams are out riding the route of the Omloop Het Nieuwsblad. It’s a media event itself with photographers out to snap the scene and reports of who rode where make the TV news and newspapers. Spring is here.

The intimacy of Belgium explains a lot. It’s a small place with obvious landmarks and strategic points for the race meaning teams and media know where to find each other; the opposite of a mountain stage recce. But it’s this small scale that makes the pre-race ride even more important. A race in Belgium has tens or even hundreds of strategic points with narrow roads, cobbles, hills, sharp corners and sections exposed to the wind. If these were listed in the roadbook only a memory champion could recall them… and they’d probably fail after hours on the bike in cold weather with their blood sugar level dropping.

In place of this the reconnaissance, or verkenning in Dutch, is almost essential. Take a flat stretch of cobbles, it is rarely uniform. Perhaps you need to be on the left of the road when you enter to benefit from some smoother path but then need to cross over mid-way; or maybe the wind is blowing hard and there’s some shelter from a building or a hedge. On a climb there could be running water down the gutter meaning reduced traction. This knowledge is vital and it can make the difference between winning and losing. Sure, scouting a mountain stage can help but it’s rare to find being on the left or right of the road on, say, Alpe d’Huez makes a meaningful difference to the stage winner.

The Devil is in the ditch
It’s not just the cobbles and climbs, the approach to these sections is crucial. Teams need to place their leaders at the front of the bunch when entering these strategic points but on a small road there can be room for four or five riders across the road. The pace gets frantic as riders scrap for every bit of space on the road, a contest that’s often underestimated. Imagine a game of Flappy Bird only make a mistake and you can break your collarbone and even end your career. All this happens at 50km/h, trying to dodge street furniture, sunken drain-covers, flower pots and the more unpredictable parked cars and spectators. The approach roads can be as important as the cobbled climb. 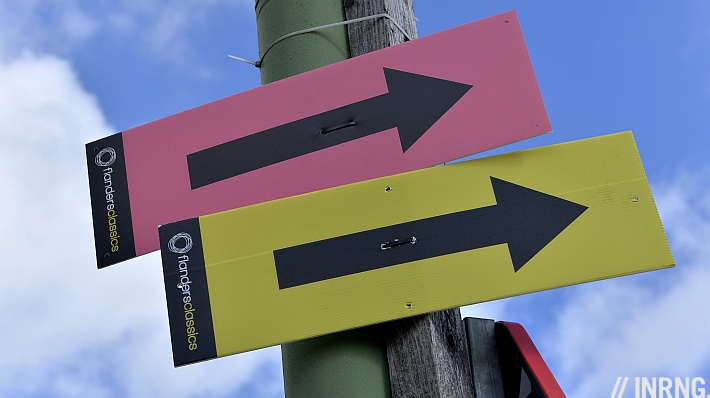 The signs of the spring classics
It might seem strange for Belgian riders, locals, to ride these roads again and again but everything helps. Perhaps some of it is lore, gestures that are repeated by each generation but it makes commercial sense too. Teams are snapped for the newspapers and it helps build the atmosphere for the event. The courses are signed days in advance of the race which helps the ride but also offers a cue to locals that the race is coming.

Teams can use race radios in World Tour races but neither of this weekend’s events are on cycling’s prime calendar meaning no radios and besides, radios are only good for big warnings.

Conclusion
Route reconnaissance is a springtime tradition tells us the classics are just days away. These practice rides are essential, a professional cyclist needs to know the roads. Nobody can remember every corner and cobble but the race can be won and lost thanks to these details and a good team won’t be surprised by a tight bend, a hole in the road or rough cobbles. There’s no substitute for riding the route and these rides are themselves part of the build-up to the spring classics. Three days to go…