As the only solo time trial of the 2013 Vuelta this is a vital moment of the race. But this being the Vuelta it’s got a climb that rises over a thousand metres above sea level.

There are two races today, first to win the stage but second for the GC riders as several climbers can expect to lose time today.

The Route: a hilly course but not technical. The climb is 9km at around 4%, a drag but everyone will tucked down on their time trial machines but with a lower average speed, the organisers don’t expect people to average more than 45km/h. The course is exposed – and takes place below a range of wind turbines – but the forecast says only a mild breeze.

It’s a route with a climb but not a day for the climbers as this requires a sustained effort rather than constant accelerations.

The Scenario
During their careers Tony Martin and Fabian Cancellara have clashed 19 times in an individual time trial and the Swiss rider has the better of the German. But momentum matters and if we exclude last year’s Tour stage when Martin had a broken wrist and the prologue of the 2012 Tour de France where a puncture ruined things for Martin, Cancellara hasn’t won the duel since the 2010 Worlds in Geelong, Australia. In short recent history says Tony Martin can only be stopped by broken bones or burst tubes.

Are there others who can win? It would be reckless to ignore the others, for example Astana’s Tanel Kangert – third in the Giro’s Stage 8 – is a specialist and so is Marco Pinotti and the same with Belkin’s Stef Clement. We can expect them to be in the top-10 and .

Of course there is Vincenzo Nibali too. He’s the GC contender who can benefit most from today. He won the Giro’s mountain time trial and was fourth on Stage 8 too. But he was “only” 25th in the Tour of Poland recently although this was on a course that didn’t suit as it was wide and flat for the most part. 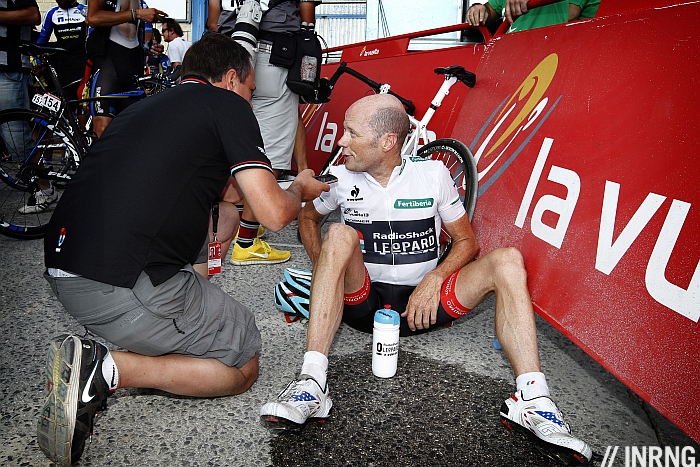 What about Chris Horner? The race leader’s got the Skeletor look but he’s won time trials before. His biggest win to date was the Tour of the Basque Country which was crowned with the time trial win. Above all the course suits him, don’t expect him to push a 55T chainring into a headwind on a flat road but if it’s hilly well he has surprised already and more is possible too.

We should expect Ivan Basso to take back some time today. As for Nicolas Roche he doesn’t have the build of a climber but he’s not got the results against the watch of a non-climber, it’s rare for him to crack the top-20 in a time trial but we’ll see if he’s improved here too.

Weather: sunny and warm with a 20km/h breeze from the south-east meaning a crosswind at times but not too pesky

TV: the first rider is off soon after 2.00pm Euro time with the last rider coming in around 5.45pm.Watch to the GC contenders in action so  from around 4.30pm.

Gracias to cycling podcaster and history teacher Manuel Pérez Díaz for the local information. You can follow him on Twitter as perezdiazmanuel