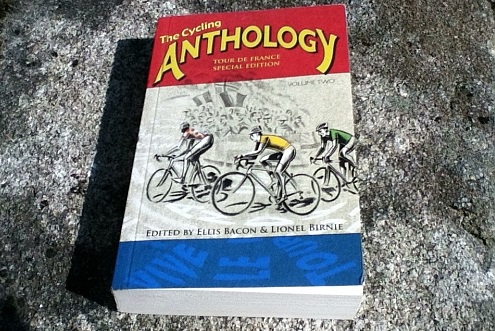 I enjoyed Issue 1 of The Cycling Anthology and now Volume 2 is out with a Tour de France theme. Whether planning or luck there’s a take on Colombian cycling history – ¡ Hola Quintana ! – as well as a look into German cycling – fünf stage wins and counting – via the curious career path of Linus Gerdemann.

The idea behind The Cycling Anthology is simple, a collection of essays about pro cycling. Some of the writers will be familiar if you read the various cycling magazines. But here there are no glossy photos nor adverts. It’s almost retro but portable despite over 300 pages. If it fits into your pocket, the prose stands out.

Volume 2 looks at the Tour de France but not in the usual way. I found the reading experience similar to the experience of July with a variety of chapters matching the varied profile of the route and it’s worth pacing your progress through the book. Set off too fast and you’ll ruin it by racing through, instead treat each chapter like a stage of the Tour de France.

It’s worth reading just for the line by Klaus Bellon Gaitan of the Cycling Inquisition blog about how Americans ritualize cycling like they do wine, whilst Colombians just ride. But there’s much more. Unlike a magazine, the Anthology pokes into some more dusty corners of the sport. William Fotheringham writes about Cyrille Guimard, arguably the best ever team manager and still a sharp commentator today for RMC Radio. Daniel Friebe covers the story of an absent rider, Linus Gerdemann who was racing at a high level yet finds himself unemployed today. There’s the technical side with Bernard Gallagher explaining the importance of a car for journalists who cover the race. I enjoyed James Starrt’s piece about Jean-François Pescheux, the Tour’s race director who is set to retire but certainly never retiring.

Volume 2 is at times a more personal take with writers often turning to their own experiences of the Tour for the story. It’s too strong to say it’s indulgent but the personal tone is obvious, Brendan Gallagher offers tips on what it’s like to drive around France as part of the press pack which might not be useful for most readers but it explains the work involved and a few of the pleasures too. For me the personal tone is best in the final chapter by Daniel Lloyd who recounts his experience riding the 2010 Tour in the service of Carlos Sastre with the Cervélo Test Team and the importance this has when getting his hair cut ever since.

There’s time to get this to read during the Tour de France but the material won’t date. There’s no race preview or route analysis, in fact it could a means to help with the post-Tour blues once the race has stopped. Vive le Tour, vive L’Anthologie.

How to buy
It costs £7.99 (about $13 / €10). All the profits from the writing are shared amongst the contributors. Bear this in mind as the book is available with Amazon but the online retailer takes large cut. Instead it’s available direct from the publishers or Prendas Ciclismo, a British bike shop.

Disclaimer: this book was sent for free by Prendas. Thanks!