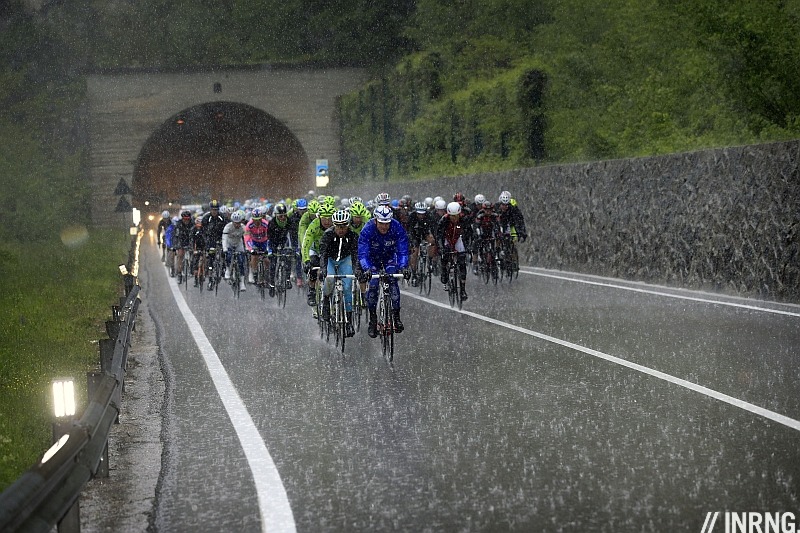 It has to be the wettest racing season living memory. Anecdotes aside, meteorological data show high rainfall for Italy and France and the Tour of Switzerland has seen a stage modified because the road was still closed by snow. There are signs the bad weather is changing and summer must starting as the French air traffic controllers are on strike today, frustrating riders trying to get to the Tour of Luxembourg and the Route du Sud.

So before the weather hots up, here’s a quick look at an item of pro kit that’s not often featured: the rain bag.

This is a small bag belonging to each rider containing the clothing they need on a damp day. It’s packed into the team car and can be brought out when rain falls. The pro cyclist’s version of an umbrella.

“Instead of expressing their gratitude for the rain by getting wet, people walk around with umbrellas.”
Tim Krabbé, The Rider

Krabbé might have a point but few cyclists will express gratitude when it starts raining in a race. Now a cyclist can’t use an umbrella but there’s a range of waterproof gear available.

When travelling each rider has their own suitcase for a race with their clothing and personal effects, plus there’s some common “stock” of team kit that travels in a truck like spare jerseys or helmets in case these get ruined by a crash. But riders have particular items for a rainy day and in the back of the car each rider has a dedicated “rain bag.” It depends on the team and the rider but here’s what you’ll find inside:

The idea is that a rider can drop back to the team car and pick up the supplies they need, either for themselves or for team mates. Jackets, gloves and shoes are all individual to a rider and they need these spares in the team car, just as the team car carries spare wheels and oil. Often the bag will include multiple items, for example two pairs of gloves so that once the first pair are soaked through a rider can hope to have dry hands again, perhaps in time for a long Alpine descent. The bag is always in the car even if the weather is good because a rider needs spare shoes in case of a crash.

Some riders hate riding in the rain, some dislike it, some try to profit from it knowing that others hate it more than you do. Few tend to enjoy riding in the rain but at this time of year it is part of the job. Having warm and dry clothes on hand is essential.

Rain rules
One other thing to note is the UCI rules on rain jackets. They’re supposed to be clear or in the team design. But in practice we see a lot of black or blue jackets being used. Riders aren’t allowed to cover their race numbers either but the whole point of putting a jacket on is to put a layer on so the commissaires can and do fine riders for wearing a jacket.

Oil
There are other tricks for the rain. Oil is one. There’s the chain of course where mechanics will smear grease onto the chain as this is less likely to get washed out. They’re also doing the same with electronic gears although, anecdotally at least, we still seem to spot a few failures when the clouds open.

A similar thing is done for the rider where oils and embrocations are used. Sheep survive on wet hillsides thanks to their wool and lanolin and derivative products can be used for riding in the rain. The legs can be covered but an old trick is to cover the lower back and the kidney area, they say it stops a chill.

Extra Work
It’s no fun for the riders but they’re not the only ones suffering. Team mechanics have more work to do when cleaning the bikes and it’s also their duty to clean the team vehicles during a race too. The rain means more work and they’re probably going through even more cleaning products than usual. Think twice before buying an ex-team bike at the end of 2013.

Soigneurs have their extra work too, having to wash more kit and maybe on a longer cycle to ensure the gear comes out clean. It might depend on the team but riders are often left to clean their shoes.

Back in the Day
Those of a nostalgic nature might say it was sunnier in the past but things have changed. Read Paul Kimmage’s “Rough Ride” and amongst the shock of doping, race fixing and bungling team managers, it’s astonishing to read that he’d finish a stage of the Giro and then hand-wash his own jersey in the hotel room, as if riding for hours in the cold rain wasn’t enough work.

Go back further and the peloton wore wool. The material can still perform very well today, especially as a base layer, but you probably wouldn’t wear shorts or jerseys. Riders with too much in the back pockets would find the jersey sagging lower and lower. 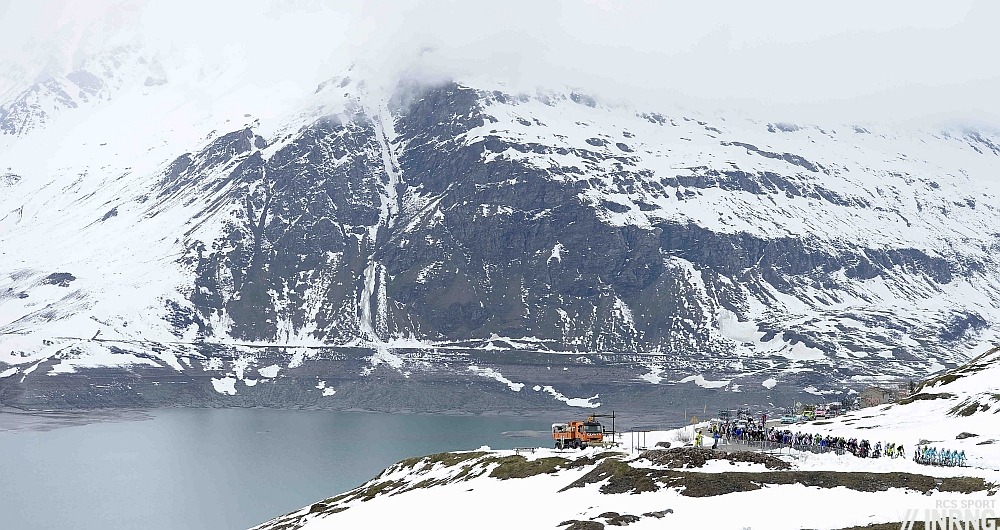