The Dauphiné race starts on Sunday and whilst it will take a week to discover the winner, Stage 1 doesn’t waste any time in testing a riders’s climbing legs, ascending a first category for the first twenty minutes.

But the big mountains are yet to come and this is more a test for ambitious teams to control the race and we’ll see if any of the sprinters have what it takes to get over the climbs, a skill they’ll need all week.

The Route: the race starts in Switzerland but climbs quickly into France for an out-and-back loop. The early Côte de Morgins and Pas de Morgins later are the same thing but climbed from either side and the outward section is hard with one kilometre at 12.8%.

The Col du Corbier is a proper climb with a winding road and irregular gradients, it’s got sections around 10% and will put some in difficulty and it’s average of 7.5% is flattered by an easy start and a flat passage through the village of Le Biot. A regular descent follows and despite the uphill gradient on the profile above, there’s plenty of time for dropped riders to come back and the Pas de Morgins is easier on the return.

The Finish: uphill but only just. This is a fast finish into the ski town of Champéry and suited towards the sprinters if they are still with the bunch because despite the slope there will be a big advantage for someone sitting on the right wheel. A wide road is engineered to allow easy access for tourists into town and the bunch will have no problems, nor is there anything to use for an ambush should a breakaway arrive. 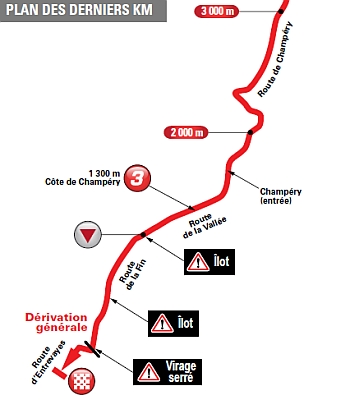 But the final moments are awkward with a right-hand bend quickly followed by a left-hand bend, all in the final 200 metres all on a road just five metres wide meaning riders will have to fight for position ahead of these bends.

The Scenario: I’m tempted to say “Boasson Hagen” and leave it at that. The Norwegian was back to winning ways after his success in the Glava Tour and he can both climb and sprint. Even more to his advantage is that he and other Sky team mates spent time in a mountain training camp in nearby Châtel last summer before the Tour de France so they’re on familiar roads too.

Fortunately nothing is that certain. The opening climb is a lottery, riders could use it to launch attacks and the race could split apart, the short distance of 121km promises an explosive stage.

There’s also team work, Boasson Hagen might be on duty for Team Sky and tasked with protecting Chris Froome and Richie Porte. And this is before we consider other riders. If Thor Hushovd (BMC Racing) is back at his best then he could strike whilst Gianni Meersman (OPQS), Tony Gallopin (Radioshack) and Francesco Gavazzi (Astana) could all be there. Katusha’s Daniel Moreno won two stages last year but this stage might not have enough climbing for him to outsprint the others. By contrast ot’s less certain if Nacer Bouhanni (FDJ), Michael Matthews (Orica) and Michel Kreder (Garmin-Sharp) make it to the finish with the front group but they can cope with some climbs, more than Cannondale’s pure sprinter Elia Viviani.

Normally it means a reduced bunch sprint. A breakaway could make it but few will want to let someone else escape and take the overall lead, too many teams will be working to set up their man for the finish. Finally there’s the outside possibility of exploiting a crosswind where a team could drive over the Col du Corbier and split the race but the weather doesn’t seem tough enough for this. So we’re back to Boasson Hagen.

TV: Live on French TV which means there should be a stream to watch and it’s on Eurosport too as well as other countries around the world including NBC in the US and SBS in Australia. Subscribe properly rather than use a pirate feed and you’ll be treated to an HD image, if not cyclingfans.com and steephill.tv will serve you an internet feed. The stage is scheduled to finish around 3.00pm Euro time.

Weather: much of France has had the worst spring in terms of sunshine since records began two centuries ago. But the weather is finally set to turn although this means mild weather for the Dauphiné all week rather than a heatwave.

Sunday’s opening stage will be cool but dry as it crosses the Abondance valley with a mild crosswind on the way out and back and temperatures peaking at 12°C (53°F).

Switzerland: why is the French race starting in Switzerland? Of course many races start outside their home country but the Dauphiné organisers ASO have inked a deal with the Portes du Soleil ski area which is in both France and Switzerland and includes resorts like Morzine and Avoriaz.