The Psychogeography of Paris-Roubaix 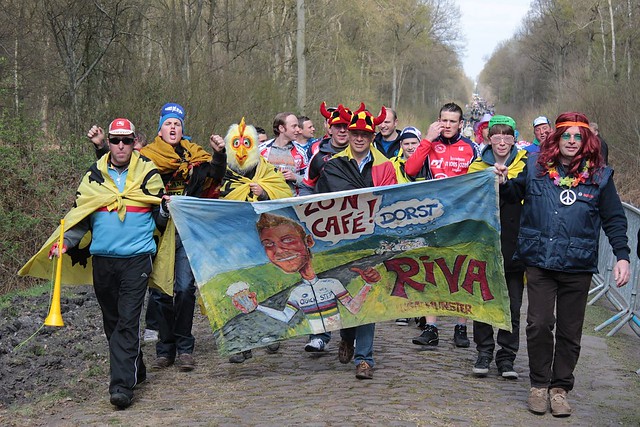 Psychogeography is a concept designed to let people explore places and view the land and environment differently. There are books on the subject but there no rules, it is up to you to link landscapes to what’s on your mind. For example view London via the famous “Tube” map of its metro system and the British capital becomes a collection of lines and stops rather than streets and buildings.

Cycling does the same to parts of Europe. Belgium has crosswinds, as if no matter the wind is always perpendicular. Can you name a famous col in the Spanish Pyrenees? Probably not because for cyclists the Pyrenees are French despite the mountain range being shared by both countries.

Paris-Roubaix is one of the best examples of a race whose myth redefines the landscape, imposes artificial names on places and even manages to turn a crumbling shower block into an sporting Elysium reserved for an elite.

Let’s start with the start Paris-Roubaix doesn’t even start in Paris. Kilomètre Zero is in Compiègne, 65km north-east of Paris. But Compiègne-Roubaix just sounds wrong even if it’s right. Already the race is a pretence, mixing up names in and boldly claiming the French capital as its own.

Next, a misconception. Paris-Roubaix is flat, right? Actually no, the opening part of the race is up and down and there’s almost 500 metres of vertical gain before the first cobbled section. Sure, it’s not Alpine but it’s not flat either, there are rolling hills to climb.

Next the cobbles dominate the mind as well as the race. Think of the race and you think pavé but they account for only 52.6km of the 254km race. Each section is rated and if you strip out the relatively easier 1,2 and 3 star sections, the tough four and five star sections add up to 25km, or 10% of the race. This doesn’t make it any easier but this cobbled classic is 80% tarmac. Although for all the myths attached to this race, the cobbles themselves are rarely exaggerated. They really are as brutal as everyone says.

The plain roads are not easy either. It is because the cobbles are difficult that other parts of the race become hard too. The mythology of the pavé creates a self-reinforcing pattern where riders fear the cobbles therefore they must be in a good position ahead of the sector. So the speed goes up and riders jostle for position, increasing the chance of a crash. Which you need to be at the front to avoid. A vicious circle that means the approach to the cobbled section is a violent as the cruelty of the cobbles. This is particular apparent at the entrance to the Arenberg Forest section where the bunch approaches the start of this sector at speeds normally seen by the flamme rouge on a sprint stage of the Tour de France.

Where are we, Hérin or Arenberg?

Did I say Arenberg Forest? This long section of cobbles is the first five star section in the race and famous amongst cycling fans around the world. Only there’s no such place as the Arenberg Forest, locals call it the Forêt de Raismes. Similarly the cobbled section labelled by the race as Trouée d’Arenberg is actually the Drève des Boules d’Hérin. Drève means driveway, from dreef in old Dutch and Hérin is a place up the road. Arenberg is the name of a nearby village and mine but it’s only in the minds of cyclists that the name is applied to this road once a year. The label was created by L’Equipe journalist Pierre Chany in 1970.

Luchin, known as the Carrefour de l’Arbre by lost cyclists 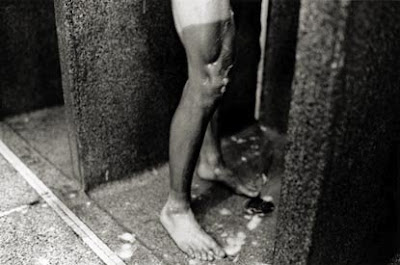 A washroom reserved for VIPs

It’s not just the route that takes on an altered reality and identity. Other places become special. A normal day riding around the Roubaix velodrome must be boring, in fact everyone uses the new Jean Stablinkski vélodrome that’s just been built but for one day of the year everyone, from first to last, longs to ride the old cement track outdoors. It’s the same with the showers at the finish. Ordinarily they look agricultural with stone booths remiscient of a cowshed, only look closer and the brass plates on each stall are not engraved with the name of livestock but past winners of the race. A nameless Swiss journalist whose article is no longer online sumed up the experience:

“The showers are the only strategic place to get hold of a Paris-Roubaix rider. They all go there. And they dream of the place like a dog dreams of a bone. With time the communal showers have become a legend, as much as the cobbles. They are the wall of tears, the place where riders grimace, lament, compare injuries, describe their crashes… it’s the place where they wash dust, wounds and fatigue.”

Today every big pro team has a bus with onboard showers yet when the riders finish taking a shower in the old stadium is part of the ritual, a privilege reserved for finishers even if the building is drafty and hot water uncertain.

People too can be different. You might see big crowds but the French are often indifferent to pro cycling. Yes they have the Tour de France but the sport doesn’t have the following some foreigners imagine. So a lot of people by the road are not locals but Belgians who live a cobble’s throw away over the border. Roubaix municipal border is also the national border between France and Belgium so many passionate Flemish fans make the trip.

Finally objects are also transformed too. Each year the race commissions a local stone company called Sloss to find, polish and mount a cobblestone as the trophy. You might visit the home of a champion or the service course of a team and find a big collection of silverware. But that amidst the cups and trophies the mounted stone is immediately recognisable. You know the land where it came from.

Main photo: Flickr’s Roxanne King … who is also on Twitter.

Previous post: Roubaix: The Road To Hell and Back