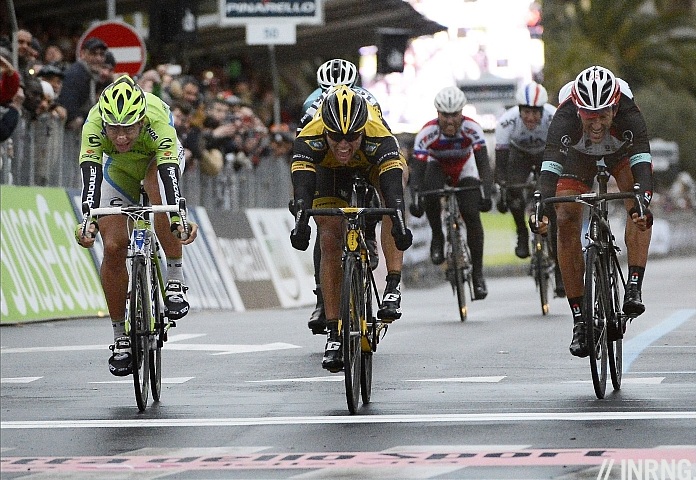 Gerald Ciolek (MTN-Qhubeka) throws his bike to the line to finish ahead of Peter Sagan (Cannondale) and Fabian Cancellara (Radioshack). In a race so full of suspense it was suspended the outcome of the race was not certain until the last few seconds when the German proved the fastest from the group of six that reached Sanremo. This was the moment the race was won.

Today’s Milan-Sanremo was so much more than a bike race. It was a both fight against the elements and a logistical struggle. If the race rolled out of Milan in an orderly but cold fashion Mother Nature conspired to block the Turchino pass with a snowstorm. The race had to be stopped in Ovada where frozen riders were rushed on to waiting team buses in order to be driven over the pass to the warmer maritime climate where drizzle and dampened spirits awaited.

From Milan an early break went with Maxim Belkov (Katusha), Lars Bak (Lotto-Belisol), Filippo Fortin (Bardiani Valvole-CSF), Diego Rosa (Androni Giocatolli-Venezuela), Matteo Montaguti (Ag2r La Mondiale) and Pablo Lastras (Movistar). An move like this is often futile but these six got a chance to warm up, they weren’t going to win but they might as well generate some body warmth. They raced on to Ovada where snow was creating a white landscape all around.

Above this town the Turchino pass was covered in snow and practically impossible to climb by bike, yet alone descend, making it impossible for a race. So all were stopped and the riders were bussed over the pass to resume racing in Cogoleto, the coastal town 130km from the finish. Rider’s fingers warmed up enough to fill Twitter with icy images of helmets stuck with snow and faces made wretched from the cold.

The break was restarted with the breakaway given the seven minute advantage recorded when it arrived in Ovada. The race resumed but it was decided that the climb of Le Manie would be skipped and the race would proceed along the coastal road instead. It resumed with plenty of abandons, you wondered if the broom wagon was reservation-only. TV kept listing the retirements but it was hard to track as riders were covered in wet weather gear, their €20 rain jackets flapping in the wind to undermine hundreds of thousands of Euros of wind-tunnel time, even if many riders were spotted sporting Castelli’s Gabba jacket despite being having other clothing sponsors.

The withdrawals were almost the only newsworthy events during two hours of TV as the bunch slowly chased the six fugitives. Their advantage was melting as slowly as an ice cream on the beach of Sanremo today. It was one of those moments of contrast where the TV audience, warm and comfy, wanted something to happen whilst the riders probably wanted everything to stop so they could get a warm shower. Still the race pressed on and the heat began to rise as the lead break was down to three riders as it crossed over the coastal capes.

The temperature soared as they approached the Cipressa, the speed picking and break was caught. A crash brought down two from Sky and Garmin-Sharp each. The climb started with a move going away immediately, it was caught but showed the pace was high. Over the top of the climb and Philippe Gilbert lead. The Belgian world champion began to pull out a lead on the descent, exploiting the wet roads to his advantage. He was soon joined by Fabian Cancellara (Radioshack), Eduard Vorganov (Katusha), Ian Stannard (Sky), Peter Sagan (Cannondale), Filippo Pozzato (Lampre-Merida) and Sylvain Chavanel (OPQS) and in a moment of hesitation Stannard, Chavanel and Vorganov slipped off the front. The trio led to the Poggio and on its ramps both Stannard and Chavanel attacked, leaving Vorganov even more in the red than his red leggings suggested, his style cramped further by a bizarre shower-cap style helmet cover that looked like a plastic bag had blown on his helmet. 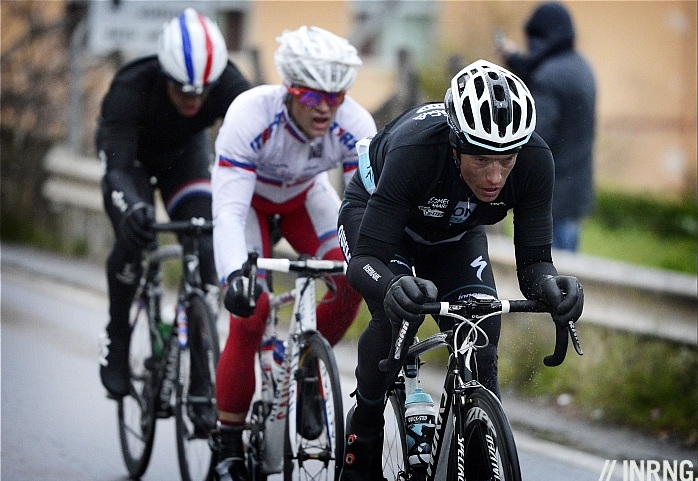 With the Russian ejected, the Franco-British tandem kept up the pace on the Poggio as the bunch swept up the other escapes. Maxim Iglinskiy had a go but it was early and on the second part of the climb Katusha’s Luca Paolini took off and was joined by Cancellara, Pozzato, Sagan and Gerald Ciolek (MTN-Qhubeka). These riders caught the two leaders on the descent and as they came into Sanremo Stannard tried an attack, his diesel engine chugging away. The group looked to Cancellara to chase but it was Sagan who jumped, not just burning a match but setting fire to the rest of the matchbox after his work on the Poggio. The Slovak and Swiss are clear rivals and were marking each other, all to the advantage of Ciolek, a fast-finisher being carried to the line in their broad slipstream.

The six rode and it was Sylvain Chavanel who launched the sprint, emboldened by his surprise win in Paris-Nice but also playing to his strength as he doesn’t have a jump, more he can turn the power on for long periods. This made Sagan and Ciolek sprint and as they went side-by-side it was Ciolek who had the fresher legs and he surged to the line. There was no time to celebrate but a warm smile appeared as he crossed the line.

Tactically it was smart riding from Ciolek, he kept a cool head whilst the heated rivalry between Sagan and Cancellara meant the two marked each other. He was there when it mattered on the Poggio and kept with the leaders as they rushed over the top. As Cycle Sport’s Edward Pickering points out, of all the six leaders, he was the only one not to attack during the race. To those who might say “he just sat on the wheels,” take a look the case of Filippo Pozzato who tried the same trick but could not hold the pace. Ciolek covered the final attacks and was perfectly placed as they came into the Lungomare finish line, sat right on Peter Sagan’s wheel. 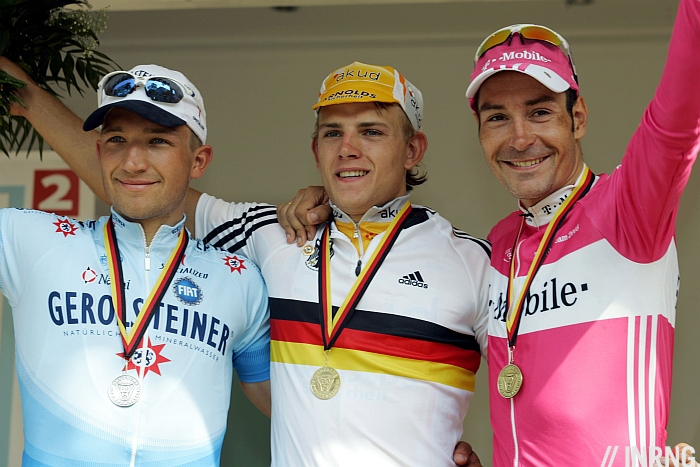 Ciolek?
He is German but the name is of Polish origins. You say it like “Tchio-leck” although in times past the “l” would have been a “ł” which is like a “w”. From today we can call him the winner of Milan-Sanremo. But Gerald Ciolek shot to prominence when he won the German national road race championships in 2005. Aged 18 he did it by outsprinting Erik Zabel.

For 2006 he stepped up to Team Wiesenhof and won the World U-23 championships, edging out Romain Feillu of France in a sprint from a small group. He rode for 2007 and 2008 with T-Mobile which became Team Columbia and collected several sprint wins but he was the third man to Mark Cavendish and André Greipel. Touted as equally good, he went to Team Milram to try his luck but the dairy-backed German squad saw many a career curdle. Back with Quickstep for 2011 and 2012 he came close with results but never landed anything big. It looked like his career was over or certainly he was going to become a lead out man.

But he joined MTN-Qhubeka and has impressed from the start of the season, winning a stage of the Driedaagse van West-Vlaanderen. In a race dominated by the cold and the snow, Ciolek and his African team came in from the cold in Sanremo. 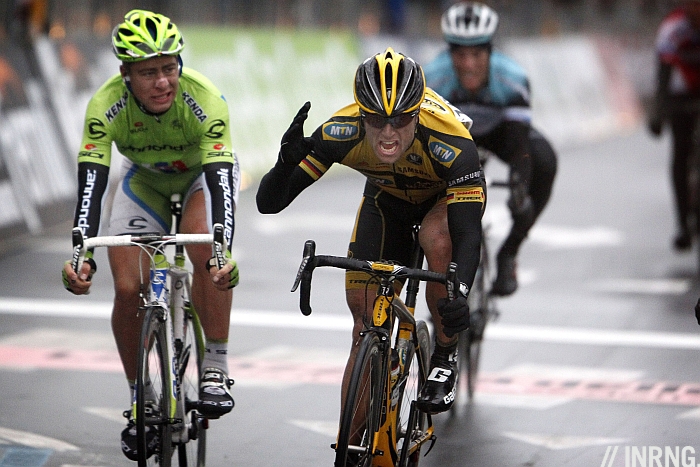 Congratulations to all finishers.