The Spin: Tour of Flanders Preview

Easter Sunday is coming and whilst it’s church and chocolate for many in Europe, half of Belgium is preparing for the annual ritual of De Ronde.

The Tour of Flanders is one of the highlights of the cycling calendar, a manic race across seemingly ordinary countryside but where numerous cobbled sections and short wall-like climbs make for one of the hardest races of the year. Appropriately the race will have five hours of TV coverage, an endurance event even for those on a sofa. Full details below.

The Route
If the route is tweaked every year, last year saw a radical change with the finish moving from Meerbeke to Oudenaarde and crucially abandoning the Kapelmuur to use three finishing circuits. The 2013 edition is near identical to last year, the only significant difference seems to be the addition of the Jagerij cobbles before the Molenberg.

The race concludes with three finishing circuits, each is different but shares the combo of the Oude Kwaremont and Paterberg climbs where the race passes beer tents and VIP grandstands several times.

The Cobbles and the Climbs: the difficulty of each section of cobbles and every climb varies and the harder they are, the harder the racing. It’s all about positioning and everyone wants to be at the front because if a rider ahead has a problem or even slows it takes a lot of effort to overtake, accelerating on cobbles or uphill means using a lot of energy. But since these roads are often narrow, this real estate comes at a premium, so much that riders will kerb hop to use cycle paths and even the grass verge. The racing is so fierce just to reach the start of these strategic sections that it can be similar to a bunch sprint bearing down on a sharp bend with a kilometre to go. You will see riders rubbing shoulders and taking great risks. The approach is just as hard as the difficulty itself.

The Oude Kwaremont: it’s a climb but different from your usual Flemish berg at 2.2km long and a meagre 4.2% gradient. It starts with asphalt for 600m then you have 1600m of cobbles. Above all, instead of a steep ramp, the “Old Quarter Hill” is longer and steadier. It rises early to 11% and then levels out. The cobbles are better maintained too. Normally there’s a gutter to aim for on the left but it seems they’ve placed crash barriers here to force riders on the cobbles. It is tackled three times, after 182km, 219km and 239km. 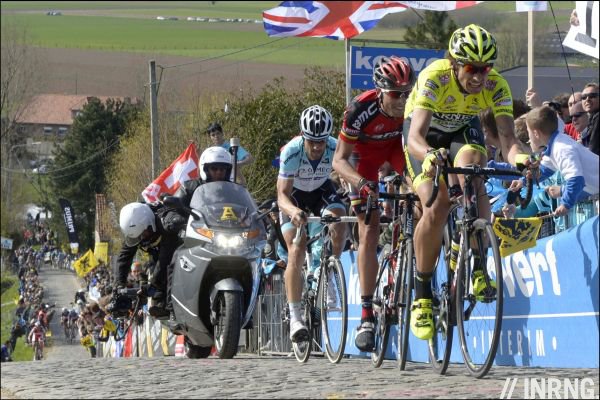 The Paterberg: less than four kilometres after the Kwaremont, the Paterberg is an awkward climb. At just 400m, averaging 12% and maxing at 20%, it is short, steep and cobbled. It is also exposed with almost no cover from hedges, embankments or trees. Instead barriers and fans provide the only cover. 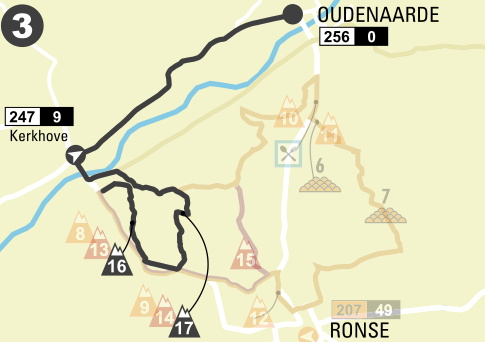 The Finish: the last section from Kerkhove to the Minderbroedersstraat in Oudenaarde is over eight kilometres long in one straight wide line all the way to the finish. It is the most unremarkable of roads, there are no sharp corners, roundabouts or hills and it is flat. But for one day of the year it is special, a red carpet to welcome the stars and heroes of the nation.

The featureless nature is still highly strategic. Any rider up the road will a small gap will be visible to chasers. It is also the chance for dropped riders to come back to a peloton. The final kilometre is flat and straight with the tiniest of rises to the finish line. Crucially the weather forecast says a headwind all the way.

256km: Note the distance. So many races have been cut short this year that the distance is even more significant. It’s equal for everybody – unless Team Sky have been lapping Tenerife – but it could mean a few run out of energy in the final moments, both because nobody has the race distance in their legs and also because the cold on Sunday means even more calories will be expended. More than ever riders may cope with the first 200km but the final hour will be selective.

The Contenders
Every sport loves rivalries and we have Fabian Cancellara vs Peter Sagan for 2013. It’s an obvious duel given both stood on the podium in Milan-Sanremo and each won a Belgian classic last week in the GP E3 Harelbeke and Gent-Wevelgem.

But this is a classic and not a track pursuit race between two riders. As Gerald Ciolek showed us, watch two riders and someone else will win. What to make of OPQS? Sylvain Chavanel seems to be their best card with Tom Boonen have a run of injury and bad luck that sees him short of form.

It’s nearing crunch time for Team Sky. All the money spent on block-booking high altitude hotels and flying riders in and out has to start paying dividends soon. If anything their problem is too many riders want to win, will they work for each other? We have Edvald Boasson Hagen, Geraint Thomas, Ian Stannard and Bernhard Eisel as contenders and I think the first two will cope with the climbing better.

BMC Racing should have the stars but several riders are absent. Thor Hushovd and Greg Van Avermaet can both sprint from a group but they are rare winners. Perhaps Daniel Oss will rock their day?

Last year Filippo Pozzato made the podium but seems less certain to repeat this although he was surprisingly good last year, coming back from a broken wrist very quickly so he could rise to the occasion again. His old team mate at Katusha Luca Paolini thrives in hard races but almost never wins, the Het Nieuwsblad was probably his chance.

Amongst the dark horses, Heinrich Haussler is looking strong and Jurgen Roelandts is a good pick if he can get a chanhce. There’s in-form Oscar Gatto of Vini Fantini. The Italian trounced Thomas Voeckler recently but the Frenchman’s coming into form and might liven up the race along with Damien Gaudin and Seb Turgot although these two are better picks for next weekend’s Paris-Roubaix. FDJ’s Yoann Offredo likes long races but has a pyromaniac tendency to burn his matches too early. By contrast one rider you might not see until the end is Alexander Kristoff of Katusha, he’s in form and remember he won a medal in the long Olympic road race last summer. Argos-Shimano’s John Degenkolb is an obvious fast finisher. Orica-Greenedge’s best hope seems to be Sebastian Langeveld whilst Astana have the tandem of Max Iglinskiy for the hills and Borut Bozic for a sprint.

A full startlist is online at www.rondevanvlaanderen.be, go to Wedstrijd > Deelnemers and then look for the PDF. Do it in Dutch because this seems to be updated more often than the English section.

The Scenario
Fabian Cancellara attacks. Does Peter Sagan chase? This is the big question that could define the race. If Sagan follows then he wins, if he does not then Cancellara wins. But as we saw in Sanremo if these two mark each other someone else can jump away. What chance Chavanel profits or maybe Boasson Hagen does it?

Finally there’s always the threat of a bunch sprint. We tend to think of these races as a contest for the last man standing but last year Tom Boonen got away with Alessandro Ballan and Pippo Pozzato yet a group of almost 50 riders came in after them. With a headwind it’s possible, but still unlikely, that a big group contests the win.

Weather
Another cold day where the temperature won’t get above 7°C. There will be clear skies meaning dry cobbles. A breeze from the north-east of 20km/h is forecast which is not strong enough in itself to splinter the race but it does mean headwind for the finishing sprint.

TV
Coverage on Belgian TV starts at 9.00am Euro time with pre-race analysis if you want the full Flemish experience. The race feed starts at 11.45am and the finish is expected between 4.00pm and 4.50pm Euro time meaning five hours of live coverage.

Note the clocks change in Europe to mark, nominally, the arrival of summer time. In other words Euro time or CET = GMT + 2.

Eurosport is covering it and you’ll find the usual pirate feeds via cyclingfans.com or steephill.tv.

Say What?
Flanders is a region of Belgium and despite being called a “Tour” this is a one day race. The race is known locally as De Ronde van Vlaanderen or just De Ronde. In fact it’s not even a tour of Flanders. 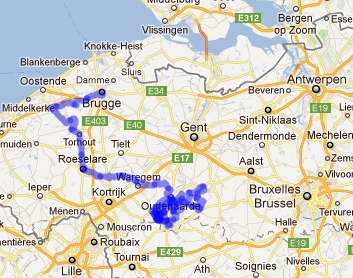 The map shows Flanders, roughly from the coast to Antwerp but the route is distinctly Brugge-Oudenaarde and the final laps hog a lot of the distance so the race doesn’t get to criss-cross the whole region.

The New Course
The change of course last year upset many, seeing as the race left the special Kapelmuur behind, swapping its sacred chapel for the Paterberg and the new VIP beer tents. The symbolism is obvious the sport ditching its tradition and losing its religion to grab money. But remember (or read below) the race was started by a newspaper to sell paper

It’s too early to tell if the racing is altered. Certainly last year’s edition with the repetitions of the Kwaremonet-Paterberg combo looked like a kermesse with its laps to TV viewers but the riders spoke of deep fatigue from the repetition of the climbs, almost to the point of being scared to attack in case it costs them energy.

Race History
First run in 1913 by Carolus Ludovicus Steyaert, a journalist who used the nom de plume Karel Van Wijnendaele. This Sunday’s event is the 96th edition since the First World War stopped the race.

It was run during the Nazi occupation of Belgium, making it one of the few races to continue during this period and it is said German soldiers help control the route. This apparent collaboration saw race organiser Van Wijnendaele banned from journalism following the end of the war but it turned out he had given shelter to fallen British aircraft crews and was subsequently cleared.

Alberic “Briek” Schotte started the race no less than 20 times, finished 16 and won twice. He died on the day of the 2004 race. Belgians Achiel Buysse, Eric Leman, Johan Museeuw, Tom Boonen and Italian Fiorenzo Magni have each won the race three times.

Next post: The Moment The Race Was Won: The Tour of Flanders

Previous post: Ronde van Paterberg, A Sunday on a Hill