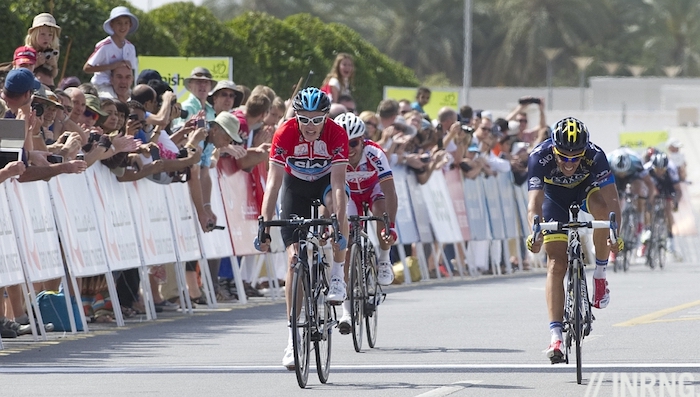 Chris Froome won the Tour of Oman. Watching him attack with 1km to go on Stage 5 was a strange moment. It was exciting but not the usual “safety-first” tactics deployed by Team Sky where a rider will often only attack if backed-up by a team mate or if it’s clear they’ll go away. Froome’s move had risk all over it, if caught he left himself exposed to a counter-attack. But it all worked out and he won his first ever stage race.

More urgently perhaps, Thor Hushovd’s win was his first win since September 2011. All of a sudden we’re seeing old and new comes coming to the fore ahead of the classics season that’s now less than a week away with the Omloop Het Nieuwsblad next Saturday.

Blanco wins
Dutch team Blanco Pro Cycling have six wins this season now thanks to Boom and the others. As said on here before the team was undergoing a quiet revolution to become a more professional squad with an emphasis on sports science and clean riding rather than more suspicious practices of the past. But the sponsor left last year. Has the team found a winning way? Or is it just that all the riders know the team could fold by the end of the year so it’s time to get some results? There’s no way of telling but we’ll see how harmoniously they ride during the year, a test as whether riders see their chances together as a team or a scattered across other squads for next year.

Vichot becoming famous
Arthur Vichot (FDJ) won the Tour du Haut Var this weekend. Whilst Thor Hushovd and Lars Boom won each of the stages, the Frenchman took the overall. He won a stage of the Dauphiné last summer. He’s known to some Australian fans as the “Obscure Pro” because he was chosem at random by some Aussies to get a hero’s welcome in the 2010 Tour Down Under. Roads were daubed with his name, banners were waved. He’s only 24 and if he keeps up the progress he’ll make find the French are chanting his name too.

Wiggins Diet
Wiggins is aiming for the Giro but he could start a sideline in diet tips after revealing “I’m 82kg in the off season, 75kg now and 70kg at the Tour.” I’ve had emails and tweets asking about this and yes it’s a lot to lose but who knows, in the same interview Wiggins says he looks forward to the Giro as “it’s the only race in cycling where they never really mention doping in the whole race” which is an odd choice since the winning trophy from 2011 passed from Alberto Contador to Michele Scarponi… a man currently suspended.

Scarponi suspended
Michele Scarponi hasn’t been found but his team have confirmed to Velonation that he is suspended. As one of the rare members of the peloton to have used both the doping doctors Dr Fuentes and Dr Ferrari my sympathies are limited to put it gently. But all the same there’s something uneasy about letting teams suspend riders when it suits. Now if employers want to take precautionary or moral positions that’s fine and something to be welcomed but it’s also confusing. Should a rider on one team get linked to a doping scandal by the media they risk being suspended by their team meanwhile other teams don’t act or care, meaning an iniquitous system. Plus there’s the whole element of justice, a rider needs to race and a mean employer could suspend a rider they don’t like but on another day they might let a preferred rider continue. Don’t forget that Luis León Sánchez is also suspended by Blanco. Full pay but he’s not being picked for races.

Di Luca
Finally on the subject of old Italian pros and questionable ideas, Vini Fantini have hired Danilo Di Luca. I like the team, whether it’s the blunt charisma of team manager Luca Scinto or the fluo-yellow kit which is so much brighter than any photo or TV can convey. But I tend to agree with Italy’s Cycling Pro blog that laments this move. Perhaps the 37 year old rider will do something in the Giro but it’s a sign the team has to invest in riders from the past rather than tomorrow. Interestingly as Cycling Pro suggests the hire came about directly from the sponsors and was practically imposed on the team management.