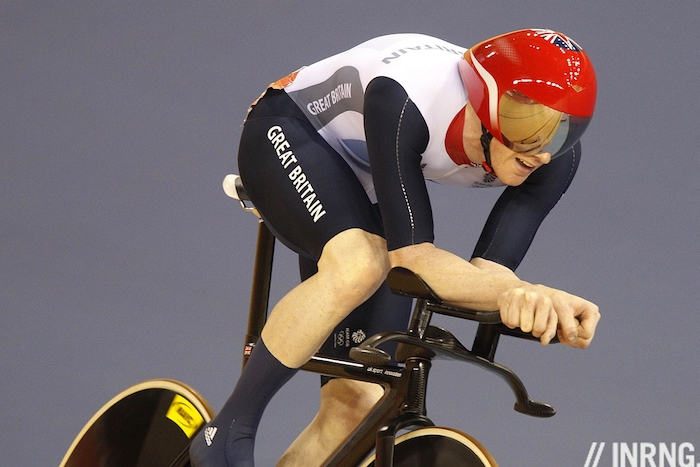 The success of the British Cycling team on the track is making many jealous. Today L’Equipe reports the French are wondering just what the secret is, are the British using special ultra-low friction ball bearings in their wheels or perhaps exploiting new theories on energy and power?

If there is a secret technology it is staying hidden. However there’s a special machine which spins and helps give the British team an advantage that other squads don’t have. A lottery draw machine.

Here’s a look at this advantage plus a focus on some of the technological advantages used by the British track cycling team.

Lottery Jackpot
It all begins in the 1990s when a nationwide lottery was created by the British government. A share of the revenue generated was given to a state agency in charge of sports. Funding was allocated to national federations according to performances on the world stage, gold medals in the Olympics translated into golden funding. British cycling had seen Chris Boardman and his nemesis Graeme Obree duel on the track but things got organised. National performance director Peter Keen made the obvious discovery that the velodrome was a gold mine with all sorts of medals up for grabs, compared to just four on the road for the men’s and women’s road race and time trial. In other words, win on the track and you get more funding which means you can win more on the track, a virtuous circle.

Better still, if many in Europe were dominating the road, the track was a relative backwater. In countries with a cycling tradition the road drained the talent away. Before you leap to the comments section, winning on the track wasn’t easy, it’s just that the odds were slightly improved. The British weren’t the first to get this. National sports programmes go back a long way but in recent times the French INSEP school and the Australian Institute of Sport provided the template. In fact later the British even poached some of the Australian staff. We saw the Australians become experts from almost nowhere, whereas the French had a strong pedigree on the track.

The result of this is a British cycling programme funded at £26.39m ($40m / €33m) for the Olympic cycle of 2009-2013 or £6.5 million per year. By contrast the French federation’s annual budget is €15 million ($18.5 m) per year, which covers everything from head office to grassroots programmes as well as the elite programme. USA Cycling’s total budget is $11.8 million, again for everything.

Olympic Bid
Another factor was the bid by the city of Manchester to host the Olympic games. It didn’t win but British Cycling did strike gold: an indoor track, giving Britain a world class facility. A 250m wooden indoor track was vital in a country famed for its damp climate. Symbolically British Cycling moved into offices next to the track. There’s also a complete indoor track in Wales and one is being finished in Scotland too. By contrast France still doesn’t have a comparable facility although there are plans to construct one in Paris. For now the French track riders need thermal clothing for the INSEP track near Paris whilst their British rivals ride in a heated arena. It’s the same for US riders with the Boulder Indoor Cycling track, only 142 metres long… but closed. Now Britain has another track in London.

The System
Like the Australians, most of the best British riders seem to come from the track. Of course their are exceptions like Cadel Evans and Chris Froome but there’s been a lot of money spent on detecting talent and getting it on the track, including paying riders a salary if they are part of the programme. This contrasts with the more traditional approach, from France to the USA and beyond where a talented points or pursuit rider is likely to be a road rider first and then a track rider second.

The French need not be too jealous because the French state lottery, FDJ, sponsors the pro road team and also funds the country’s athletes across a range of sports. The Belgian lottery is similar too. Something hasn’t worked in Australia this time but the system is there to ensure future success. And looking ahead the Russians have made great gains and with their Rusvelo team they are imitating the British, they’ve even poached Heiko Salzwedel who has worked for the Australians and more recently the British.

Nevertheless the British system is similar to the Australian one, a conveyor belt production line of talented riders that are ready-made for Team Sky and Greenedge.

Marginal Gains
Now we can look at the small details that make a difference. Searching for advantage is normal but the British seem to have taken this to a new level. The funding allows for this. Let’s take two examples, clothing and the the bicycle.

First clothing. Aerodynamics is all important in cycling and the human body represents the largest surface area, a long way ahead of wheels or the frame. Position on the bike is vital but once in place, can a rider gain time with better clothing? Of course, you only need to look at the aerodynamic helmets. But if all riders use one piece lycra suits, they are not the same. The choice of fabric matters as does the positioning of the seams and also other factors. In the 1990s the US downhill ski team experimented with wiring in their clothing. Spyder built a suit called “SpeedWyre”, which incorporated a “tripwire” on the surface that reduced aerodynamic drag and created a more streamlined airflow. The aim is to split the airflow as it passes over the clothing. This was banned by the FIS, the governing body of skiing.

Indeed it’s not allowed under the rules of cycling… but the UCI doesn’t seem to have noticed its use in cycling. Look closely at the British clothing and you will see the prominent seam running down the arm, I think the same feature was visible in the custom yellow skinsuit used by Bradley Wiggins during Stage 9 of the Tour de France. Are the British cheating? Well the UCI has apparently approved the clothing but it seems the governing body might not have spotted the technological advantage. There are other details like the fabric itself or look at the unusual length of the sleeves. Either way this clothing is clever but it is also expensive. It takes time and expertise to develop, with practice sessions in the wind tunnel and many iterations in the factory to get it just right. In short it’s expensive. 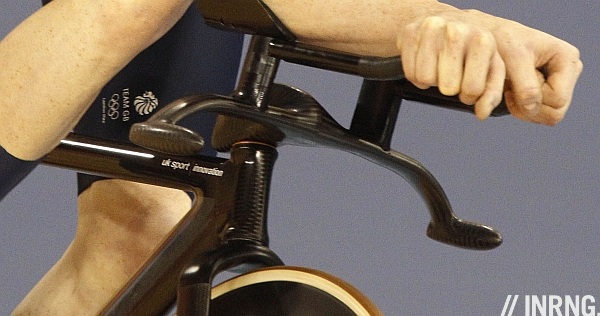 Next we look at the bike. If there’s talk of secret wheels, the frame can’t be hidden. Note the one piece bars and stem with aero profiling. Look closely at the forks too and the unusual width across the crown. The frame itself is custom built for the British team. UCI rules say frames have to be available to buy and in this case you can have a frame if you are prepared to order it, endure an unknown waiting time for delivery and nobody knows the price. The German team have a similar deal with their FES frames.

No pot of gold at the end of the rainbow jersey
Let’s note Britain’s resources are limited. Let’s go back to 2011 track cycling world championships and the British track team rode all the Olympic competitions but shunned the other events like the kilometre time trial and the individual pursuit. Presumably a decision was made not to spend money on competitions that are not included in the Olympics.

What about other sports?
Funding doesn’t always equate to performance. As correspondents on Twitter have suggested, British tennis gets lots of money but is yet to have a winning system, apparently Andy Murray’s success is not the fruit of a systemic approach. The same for British swimming, lots of lottery money but fewer medals. I don’t know these sports but I’d suggest tennis is an individual sport and perhaps Britain is outspent when it comes to swimming? But track cycling is a unique sport where you can measure every variable from a rider’s power output to the drag coefficient of their overshoes. If you can measure something you can improve it.

Conclusion
Whilst the French might wonder about wheels and ceramic ball bearings, surely a 250 metre indoor track and lottery balls count for more?

The funding is no secret. Money does not buy medals but it can buy time in the wind tunnel, it can pay for the development of clothing and bikes that others don’t get. If we can photograph the kit, we can only imagine the resources available for coaching and training. Track cycling is the ideal sport for this process-driven and methodical approach, you can’t measure performance gains in fencing or tennis in quite the same way.

Money can also retain riders for the track programme when they might otherwise head for the road, ask Geraint Thomas. Indeed there’s an overlap between Team Sky and British Cycling that you don’t get elsewhere with the possible exception of Australia and Russia.

Money is necessary for a successful system but not sufficient. But the British model with its focus on the track, its budget and resources is certainly the system that another aspiring nation would look to copy and improve.