Let’s play a word association. If say “Pippo Pozzato” and “Ferrari” then you might associate the flamboyant Italian cyclist with the Ferrari sports cars. It would be a good answer as Pozzato drives a red F430. But Italy’s second newspaper La Repubblica published an article alleging that Pozzato is associated with another type of Ferrari: Michele Ferrari, the infamous sports “doctor”.

Pozzato is a flamboyant character at times and seemed to return to form this year with some strong riding in the classics, one of the few riders able to follow Tom Boonen. But he’s seemed more grounded this year with a more humble team and a leadership role to encourage younger riders, as well as a brave tale of recovering from a cracked collarbone to racing in almost record time. Now some of this heroism is coming into question. Cyclingnews.com has the story in English. The takeaway here is that there’s a large investigation into the activities of sports doctor Michele Ferrari, a controversial figure to put it lightly. Pozzato’s lawyer is quoted as saying his client is “not under investigation”:

From a criminal point of view, at the moment there is no investigation involving Pozzato and the same can be said from the sporting point of view: we have no news of an investigation from either CONI or the Italian Cycling Federation.

At first glance that sounds a relief. Pozzato is not under any criminal investigation nor are the Italian sports authorities going after him. Phew. 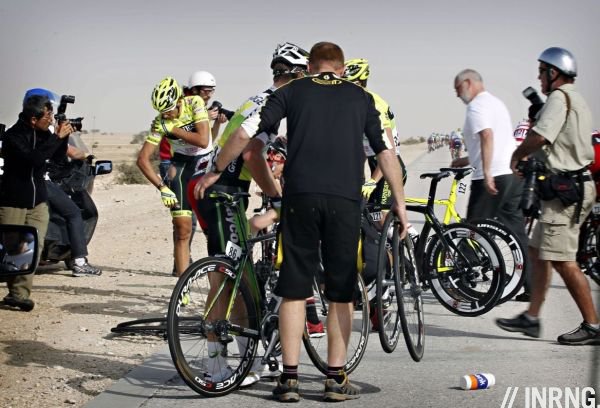 Can he make a fast recovery again?

But there’s a worrying omission: there’s no denial that Pozzato has worked with Doctor Ferrari. For now we don’t know what happened but Pozzato has been called to a hearing by the Italian Olympic Committee tomorrow to explain things further so hopefully there will be an answer shortly. Note that Italian riders are forbidden from working with Ferrari, even signing up for a cookie-cutter internet training program is enough to exclude you from the Italian squad.

The Wire
In the wake of the storm over Lance Armstrong there was a story last week that alleged the American paid close to half a million dollars to Ferrari but as hard as it might be, forget Armstrong for now. Because the story in La Gazzetta Dello Sport said approximately 90 cyclists are involved in the investigation. 90 is a big number.

Now an investigation is one thing, after all we’ve often seen names cited by Italian investigating magistrates only for nothing to happen. It could be 90 names are on a list and one by one, the magistrate draws blanks and all the riders are cleared. It could be the other way, that 90 riders have been wire tapped and there is damming evidence. Certainly the Pozzato story is apparently based on wire tap evidence.

Bigger than Lance?
Michele Ferrari has never really gone away from the sport. He’s travelled far and wide to service his clients and amongst the 90 names there could be some surprises. The sport is probably able to point to the story with Lance Armstrong and say it’s a matter from the past. But my worry with the Ferrari investigation is that it could involve active riders on several teams and ultimately prove more damaging to the sport.

Summary
Decision time for Pozzato and his lawyer. They didn’t deny working with Ferrari over the weekend, now Pozzato will be asked in a formal hearing on Tuesday whether he has worked with the controversial coach. Beyond Pozzato, the spectre of wiretaps and bank records of many cyclists being traced could be devastating. But remember some Italian investigators can brief the press with bold claims but convictions rarely follow.