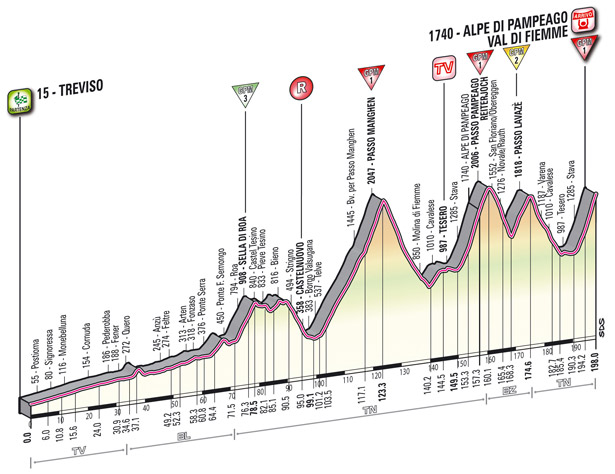 Where to start? Obviously Treviso, but I mean how do you begin to analyse today’s stage? Because this is a very difficult stage with double digit gradients and the Alpe di Pampeago climbed twice. And on top of this riders must, should or ought to remember tomorrow’s stage finish on the mightly Stelvio. Energy wasted today will cost plenty tomorrow.

It’s hard not to see tomorrow’s Stelvio overshadowing today’s stage but Stage 19 today could well be the decisive stage of the race because of the climbing involved. 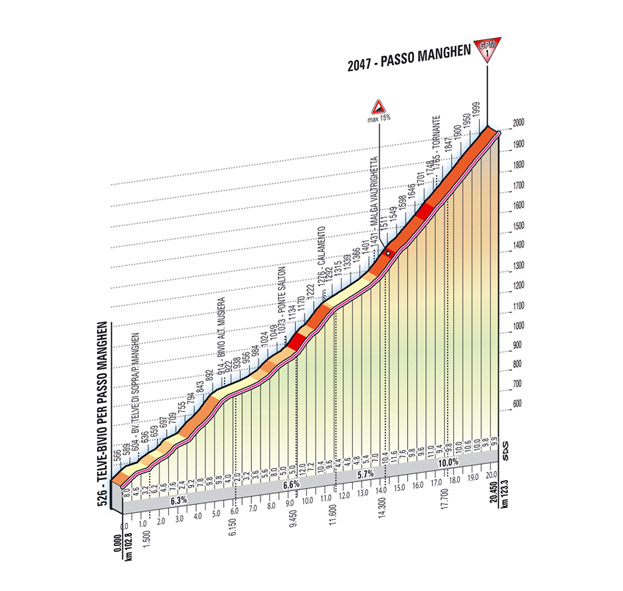 Things begin with the Sella di Roa, 7.1% for 4.8km and then it’s on to the Passo Manghen, displayed above: 7.4% for 20.5km and 10% for the last 6km to the top with a section at 15% on the way. A giant of a climb, it rises from 383 metres above sea level to over 2000 metres. This is a very tough climb by the numbers alone but note it’s closed to large vehicles and scenic, not that the riders will have time to enjoy but it means a smaller road, this is no Alpine superhighway. It was used in the 2008 Giro but early in the stage and today it will be more decisive, a point where the bunch will be thinned out substantially. As big as the Passo Manghen will seem there’s a technical descent before the flying sprint in Tesero, probably the moment for most riders to eat rather than sprint. 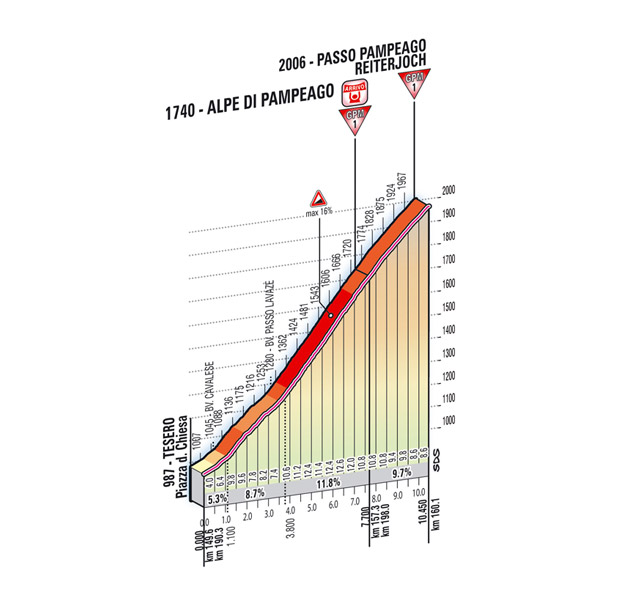 Then comes the Passo Pampeago, or Reiterjoch to use the German, where -joch is the suffix for a mountain pass. Reiter means rider, making this appropriately Rider Pass. There’s time to learn both names as the climb is tackled twice, the first time it is 10.5km at 9.7% (all the way to the top in the profile image above) and then the riders descend and tackle the Passo Lavazè, some 6.3km long with an average gradient of 8.6%, hard enough by itself. But again a tough descent follows before the climb to Alpe di Pampeago again, with the finish line right on the slope. The last 4km are over 11%. The Giro has been decided several times on these slopes.

Route summary: a warm-up on the Sella di Roa, the giant Passo Manghen rears upwards and then there’s the finishing circuit with the Double Pampeago scenario, with the Passo Lavazè, along with some rough descending. There’s almost no chance for recovery and the steep slopes should favour the pure climbers ahead of the mountain diesels. It could be the day the race is decided but the organisers will want the fight to go all the way to Milan.

Team tactics
Incentives are everything. I think Astana, increasingly an Italian team these days, might be out for revenge, or at least a face saving exercise after Roman Kreuziger and Paolo Tiralongo blew up on the Passo Giau on Wednesday. It was painful to watch Kreuziger’s ambitions fade along with his blood sugar levels. Similarly Lampre have yet to win a stage, an important matter in their home tour. The cheery Michele Scarponi could try for a podium spot today but it might be that Przemyslaw Niemiec, Diego Ulissi or even Damiano Cunego are sent up the road for a stage win, isolating Scarponi but landing the all-important stage win. Liquigas meanwhile will aim again to set up Ivan Basso who seems to be getting stronger by the day and turning into quite the sadist as he turns up the power on the climbs. But today’s climbing uses smaller, steeper roads where it is harder to set the tempo. The steep pitches favour pure climbers.

Otherwise the tactic for several today is simple: “drop Hesjedal” are the words used by Joaquim Rodriguez. The riders fear the lanky Canadian on Sunday’s final time trial and so they want to take time from him. How? Well they can’t leave it late because any accelerations on the final climb might see him come back or at least limit his losses. Instead he’s been isolated from his Garmin-Barracuda team mates before and I think he could be forced to cover moves on the first time up the Pampeago. But the Canadian can form an alliance with Ivan Basso and his Liquigas team who have a mutual interest in strangling the climbers. 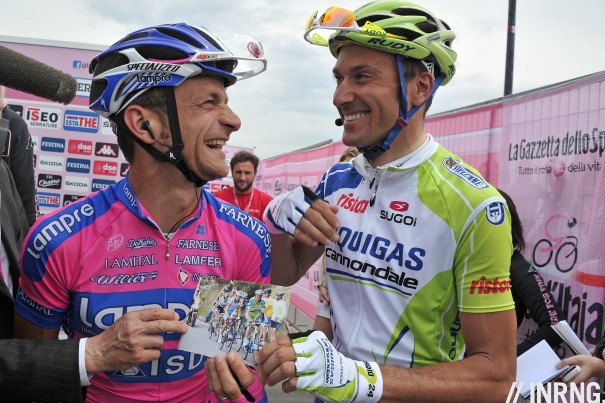 Who will have the last laugh?

What do they need to do? This might be reductive and cycling is more than chess on wheels because you are not sat opposite a single opponent but you have several players moving pieces across the board at all times. But here’s a summary of what can happen:

Weather: fine weather is predicted although there could be a shower or even a thunderstorm later in the day, a typical forecast for the mountains.

TV viewing: as ever the finish is expected between 4.50 and 5.30pm Euro time. Tune in as early as you can to watch the drama, at least from 3.30pm onwards to catch the start of the loop and the first climb to Pampeago.