From Belarus with love 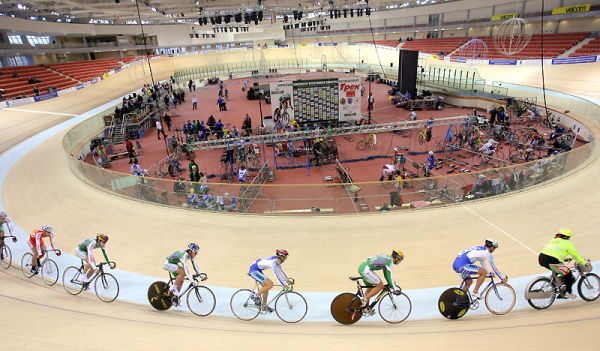 A UCI official has a giant construction project with plans for Europe’s tallest building that’s in trouble with the city authorities. Months later the UCI awards the world championships to the same city. Is there a link?

No. But decisions like this reveal antiquated governance practices at the UCI and highlight the extensive business empire of one of cycling’s most senior officials. Here’s a look at one example where sport, politics and business intersect.

The UCI recently awarded the 2013 Track Cycling World Championships to the city of Minsk in Belarus. Minsk is very capable of hosting the 2013 track cycling worlds, the Minsk Arena (pictured) is a new sporting complex with a modern velodrome. The country’s track cyclists can hold their own, indeed the shiny new Minsk velodrome was apparently built in tribute to Natallia Tsylinskaya, the “queen of Belarus” and eight times world champion on the track.

Europe’s last dictatorship
Just don’t buy your tickets yet. Visas are hard to get and Belarus isn’t an appealing place. Sandwiched between Poland, Russia and Ukraine it is Europe’s last dictatorship, run by strongman President Alexander Lukashenko. Belarus and Lukashenko have long been the target of sanctions. Government opposition is often imprisoned, protest against the government can be met with brutal violence.

Still, the capital is modernising. Minsk has a lot of building works, none more so than a vast scheme labelled “Minsk City” . This is a construction project of monumental proportions. The St Petersburg Times wrote of residential space for 38,000 inhabitants. There are plans for an 80 storey tower (Europe’s tallest building is Moscow’s City of Capitals with only 76 storeys). When the project was announced in 2007 the budget was quoted at US$30 million, more recent official figures suggest $50-60 million. But since then the Belarus economy has gone into reverse so the project’s ambitions could be scaled back. Either way this remains one of the largest construction projects in Europe.

And the company behind this giant scheme? Itera.

If you are not familiar, Itera is the Russian gas trading operation chaired by a certain Igor Makarov. Itera sponsors the Katusha team. It was named  “official sponsor” of the European Cycling Union (UEC), the umbrella group of European cycling federations. Indeed Makarov was voted president of the UEC weeks after agreeing the sponsorship deal the UEC. Just fancy that! By virtue of this presidency, Makarov now sits on the UCI’s Management Committee, the highest table within cycling’s governing body.

History lessons
A quick primer on the region’s recent history. Belarus has long been dependent on Russia, whether in Soviet times or more recently. For brevity, note it is strategically important for Russia and the relationship between the two countries has been defined by the trade in oil and gas. In “Belarus: Oil, Gas, Transit Pipelines and Russian Foreign Energy Policy”, Margarita Balmaceda and Kevin Rosner explain that the country has few oil and gas resources but is one of the world’s most prolific exporters of oil, at least on a per capita basis:

Belarus has benefited from the indirect export of Russian energy carriers through its role in the refining and re-exporting of Russian oil. Belarus’s energy exports are so significant that, despite only producing 20% or less of its oil needs, in per capita terms it exports as much in oil products as oil-rich Russia.

Belarus has an economy dependent on Russia and its oil and gas. Russia itself depends on Belarus for the transit of gas. Companies like Gazprom and Itera – both sponsors on the Katusha team’s jersey – rely on the market in Europe for much of their earnings, selling into Poland, Germany and France. In order to do this, Russia needs a safe passage for the gas and has two main routes: via Ukraine and Belarus. 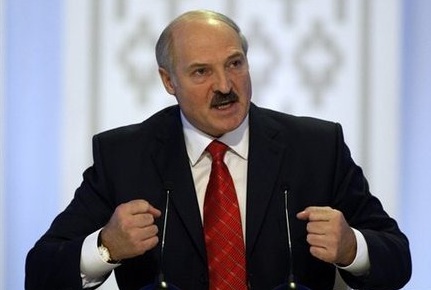 President Lukashenko has been in place since 1994. This might sound stable but he blows hot and cold. During his reign Itera has been involved in Belarus. At first it agreed cheap gas deals with the country and this brought Lukashenko and Makarov together, indeed this literally fuelled the growth of the Belarus economy. A paper by NATO’s Jens Hetland and Teimuraz Gochitashvili, “Security of natural gas supply through transit countries”, sets out the special practices:

Itera delivered Turkmen gas to Ukraine at the price of $42, to Belarus first at $19 and then $29, to Armenia at $53, Azerbijan at $52 and to Georgia at $62… …This scheme points out that Belarus, the closest strategic partner of Russia, is the most favoured.

But Moscow and Minsk have battled over gas contracts and in 2004 Moscow closed the pipeline. In bombastic style, Lukashenko called this “terrorism at the highest level” and in return illegally siphoned off gas destined for Europe. But through all of this we see the strategic importance of Minsk for Moscow and Itera has been essential to this relationship.

The honorary consul
If you wanted a clue as to how close Igor Makarov is to the Belarus regime, look no further than the award in 2005 when he was made an Honorary Consul of the Republic of Belarus. Diplomatic status no less.

Stop feeding me promises!
But the relations between Lukashenko and Makarov have taken a hit of late. Last September Lukashenko has made very angry noises about Itera and the Minsk City development. Whilst there have been some ceremonies to hand over the keys to local bigwigs, things have not gone to plan. Here is the official account from the Belarus government earlier this year:

“Deadlines will be shifted no more! No more preferences will be granted. Things will stay the way they are now. If you can build it, go ahead. If you cannot, come and tell us that you cannot build in these conditions,” Alexander Lukashenko told Igor Makarov, Chairman of the Board of Directors of the international group of companies Itera… … “Stop feeding me promises!” the President of Belarus made it clear.

We have a head of state issuing public threats, naming Igor Makarov and Itera, and threatening to eject them from this valuable construction plan. It must be the first time a senior UCI official has been blasted by a head of state.

No wonder Lukashenko is angry. I think Itera had good reason to delay. The Belarus economy has imploded and the idea of building Europe’s tallest office tower was questionable in the boom years but sheer folly today. With Lukashenko breathing fire, what could Igor Makarov do to sooth things? Image if he could award Minsk a prestigious international sports competition…

The UCI has awarded the 2013 world track cycling championships to Belarus, a country subject to sanctions and shunned by most of the world. The UCI even trumpeted Makarov’s action in its press release to announce the award:

In its first meeting of the year, and with the participation of two new members, David Lappartient (FRA) and Igor Viktorovich Makarov (RUS), the Management Committee awarded the UCI Track Cycling World Championships to Minsk (BLR) in 2013

Now Minsk has a great track and in 2009 it hosted the European cycling championships. There’s no doubt this is a viable place to hold the worlds and in a response to me the UCI makes the point well, “the awarding of all UCI events is based on a series of sporting criteria” and explains that the other contender for the track worlds was Mexico which didn’t offer such an attractive bid. The decision was probably made long before it reached the Management Committee and its metaphorical rubber stamp. Indeed to make it clear, I’ll put this in bold: Minsk won because it had the best bid.

Rather, we should note a significant conflict of interest. Whilst the Management Committee assesses the “sporting criteria”, someone in the room has millions of dollars at stake in a construction project. How do you deal with this?

Helpfully we have a precedent set by none other than the UCI’s President. In the past the UCI has acknowledged conflict of interests when awarding world championships. When questioned over the possibility of awarding the 2015 road cycling world champs to Richmond in the US with its bid led by his younger brother Darach, UCI President Pat McQuaid explained the steps taken to avoid trouble to Velonews:

“I told my brother from the outset that I did not want him to communicate with me on this topic on any kind of level, and he understood why,” McQuaid told VeloNews. “We dealt with the question of a possible conflict of interest in March. I told the events department that I didn’t want to know anything about the Richmond bid. And when it came time to discuss and vote on the 2015 worlds, myself and Mike Plant (an American member of the UCI management committee) both left the room“.

Leaving the room isn’t watertight solution to the problem but it is an acknowledgement of the problem. Yet here the UCI says the Management Committee awarded the world championships to Minsk “with the participation” of Makarov and I’ve subsequently had it confirmed that “Mr. Makarov has been involved in this decision like all other members of the Management Board“. Also we should note McQuaid saying he leaves the room because of family connections and also that Mike Plant left for reasons of nationality. So precedent says you leave the room if you have a personal or national conflict of interest. Only this time Makarov had a business deal worth a reported $50 million and remember he’s also an honorary diplomat for the country too.

Parting gift?
In the end the Belarus President has thrown Itera off the project. I suspect Itera are delighted to be off the hook for a giant construction project where buyers and tenants are going to be sparse, especially since Itera is really an energy company, the construction project looks out of place.

With an angry dictator on the rampage, Makarov could theoretically say “you have the cycling worlds” to Lukashenko. This is prestigous for a regime shunned by many nations and we should not underestimate the politcal importance of this award. Belarus is the subject of sanctions from Europe and the USA and the award of the Ice Hockey World Champs to Belarus has caused outrage and hockey’s governing body is facing heat from the US Senate and the European Parliament.

A stronger UCI
Walking out of the room, as suggested by President McQuaid, is at least an acknowledgement of problems. But if McQuaid recognises the problem, maybe others do not. A $50 million conflict of interest… yet the UCI’s own press releases trumpets the participation of Igor Makarov in the award the worlds to Minsk. Note this isn’t UCI bashing, I’m saying the UCI as an institution needs to strengthen itself. Measures to ensure it stands taller than the business interests of its officials are good for the UCI and cycling.

Conclusion
Minsk was awarded the 2013 track worlds thanks to a stronger bid than Mexico. But my concern is that the UCI hasn’t got basic protections in place to deal with conflicts of interest. This leaves it open to future risks, especially given one of its most senior officials has substantial business interests all over Eastern Europe and Central Asia and the sport is talking about new races in Russia and beyond.

A danger is the UCI thinks it is promoting the sport whilst its officials – in particular Mr Makarov – are gaining the political goodwill needed to secure giant business deals. The Minsk example isn’t the only time the UCI’s presence and Makarov’s business interests have coincided.