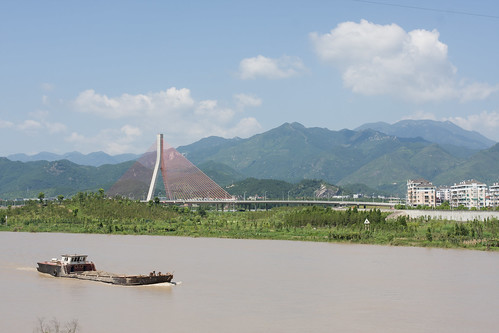 As well as the decision to rule on Saxo Bank’s future in the top level, last Friday’s UCI press release announced a new race, the Tour of Hangzhou. This five day stage race will take place in October after the Tour of Beijing. Just like the Beijing race this new event is being fast-tracked into UCI’s World Tour calendar and immediately I assumed it had to be run by the UCI’s commercial events promotion arm, Global Cycling Promotions, a fact confirmed by Velonation.

The race could be good
The Beijing Tour saw the UCI apply its expertise and hire Tour de France organisers to help with logistics. GCP can tick all the boxes for organisational skills and more so the race should meet the required standards. Better still, the region around Hangzhou is semi-mountainous and does not suffer from the appalling air pollution that is a health hazard for the Tour of Beijing. The city is also embracing cycling as a form of travel.

We can only speculate on the route but we can be sure that the race becomes crucial for many teams. Whilst many riders will be groaning about having to race in China in October, these 10 days become crucial for lesser-ranked teams. A stage victory or two can make all the difference when a squad is trying to retain its place in the top league. 10 days of racing means 10 days of points.

But we can only speculate on the future of the race, for now all we have to go on is the UCI press release. Here’s the relevant part of the text, my emphasis:

The five stage event would run from Wednesday to Sunday during the week following the 2012 Tour of Beijing.  Called the “Tour of Hangzhou”, it would be held in the area surrounding Hangzhou, a city with a population of 8.7 million in Southern China.

Pat McQuaid lauded the decision: “It is a natural step for cycling which is currently enjoying a period of huge growth worldwide. This will generate great visibility for teams and riders and can be expected to give a big boost to cycling. The injection of funding directly benefits the sport with financial returns from the new races re-invested into cycling and also profiting teams and other stakeholders down the line…”

…President McQuaid reiterated UCI’s commitment to investing in development at grass roots level and outlined that the WorldTour success has allowed the reinjection of considerable funding into training and development at regional, national and international level for men and women. He explained that the WorldTour is also expected to bring some direct returns for the athletes, teams and stakeholders involved in the future.

Conflict of interest
We can see the twin goals of a governing body trying to promote the sport and an events promotion business catapulting a new event onto the top league. Many race organisers would love their event to enter the top league but struggle to convince the UCI; here the UCI is able to vote in favour of its own projects, there seems to be no independent panel to make the assessment in a neutral sense.

Asymmetric globalisation
If the World Tour is expanding in China, it is still not very international. We have 10 days in China but there’s not a day in Brazil, India or Russia, for now at least. And note there is only one day’s racing in Germany, Europe’s wealthiest economy. There’s nothing in the USA and Britain despite big budget pro teams and booming mass participation. Wealthy Japan has no big race. Indeed China now has more days of World Tour racing than Belgium.

Follow the money
It seems the UCI is spreading to sport to wherever GCP can sign a contract. As this blog first highlighted, the UCI raided the World Tour fund to provide seed capital to start GCP, something several teams are privately furious about. Now the UCI appears to justify the expense of GCP because profits from GCP will be ploughed back in to the sport. What is not clear is whether these profits come after the directors of GCP have taken their share.

In addition you don’t have to be a master kremlinologist to note the press release is talking about “direct returns… in the future” which seems to be saying “don’t form your breakaway league” by  implying money will one day flow to teams and riders. That’s possible but it’s odd much of the message seems destined for a handful of team managers exploring a breakaway league rather than the media and fans.

Summary
For all the financial interests and business decisions, there’s still some sport to be had and we should welcome this. But the UCI’s own press release makes more claims about revenues and money than racing and riding so the financial angle is impossible to ignore. With five days in China already, another five does not mean we’re taking cycling to new places.

The Tour de France was created to sell newspapers. But in a commercial sport it is still novel to see a governing body become so involved. If the UCI wants to try its hand at money-making and race organising then it cannot express surprise if money-makers and race organisers want to run the sport tomorrow.