The dying art of wheelbuilding 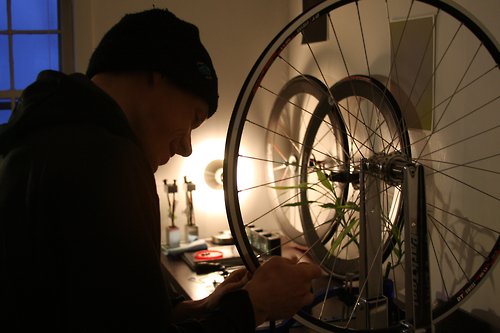 A fine racing bicycle was once a blend of art and craft but most of today’s bikes are the product of assembly lines and supply chains. Look at a team issue bike and perhaps the only remaining parts requiring a human touch are the wheels. But even this is dying out. Here’s a look at why factory wheels are increasingly dominating the market.

Once upon a time a frame builder would join tubing with lugs, brazing and welding. This process relied on principles of engineering and chemistry but was sold on the basis of skill, expertise and art. There was mystery involved and it was said the same tubing would ride differently according to the frame builder. If the craft still lives on, today’s frame artisans are a small group serving a niche market. The mass market production of frames has taken over with carbon frames rolling out of automated plants in Taiwan and China.

But the artisan tradition lives on today with the wheels on your bike. The job of assembling the hub, spokes and rim is often done by a wheel builder in a workshop and if the process boils down to engineering, there is still much lore and mystery with the process. But this is going the way of frame-building with custom builds and artisan skills being increasingly reserved for the top end of the market.

Car salesman: “Would you like to look under the hood at the engine?”
Customer: “Not for the next five years, no“

The automation and mass production makes sense from the perspective of a business case study. The same is true for the bicycle mass market, even in the performance sector. Most consumers want a pair of wheels that are ready to ride and the increasing popularity of factory-built wheels testifies to this. Look at the likes of Mavic which once sold rims but now can sell the whole wheel. The beauty of this model is that consumers will pay a premium for a whole wheel because it is ready to ride, branded and easy to understand. But economies of scale via mass-production mean it is cheaper to produce.

I salute the artisan tradition of wheelbuilding. It allows customisation and design and makes repairs easy.

Note that many factory-built wheels still rely on human hands and eyes for various assembly processes. Here’s one example.

But even this work is dying out and becoming automated. As the clip below shows, a wheel can be built in an automated process. The only process involving human hands is the lacing of the wheel but this is a low-skilled process.

Summary
Every step of building a bicycle is being automated and controlled by companies as “little” artisans face being squeezed out of every process. But the art of wheelbuilding lives on, if only at the premium end of the market. If you want the best carbon rims chances are they are still reliant on hand-trued spokes. But factory-built wheels are on the rise and the process is becoming increasingly automated and wheels are becoming commodities instead of crafts.