They say a picture says a thousand words and I think this one from cyclingnews.com says plenty.

We have Alberto Contador in a yellow jersey branded with the Discovery channel, UCI President Pat McQuaid holding a gun, Danilo Di Luca winner and the man in the grey suit is Jan Jannsen, the first Dutchman to win the Tour de France.

The photo is from the Surhuisterveen post-Tour de France criterium in 2007. Why does the picture say so much? Well for starters I find the image of McQuaid smiling whilst holding a gun is amusing. Yes I know it’s a start gun. But it’s not just McQuaid, because Contador’s nickname is El Pistolero and Di Luca is “the Killer of Spoltore”.

It’s all smiles in 2007 but today the UCI is currently appealing the Spanish verdict to clear Alberto Contador and the governing body could put an end to the Spaniard’s career. Danilo Di Luca is less cheerful these days after he was caught doping in the 2009 Giro d’Italia. Also these post-Tour races are rigged and that’s partly why you have the Tour and Giro winners wearing the leaders jerseys, so they are easily recognisable for the crowd in this piece of celebrity sport-theatre. And we have Jan Janssen as a reminder of the past, a way to remind us just how important history and legend is in cycling. One quick snap says a lot, no? 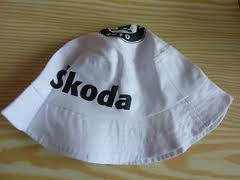 But it is competition time and the final word goes to you. The prize is a Skoda hat, unworn and as new, this is given out at the Tour de France and can often be spotted on well-dressed French farmers.

Leave a caption below in the comments that suits the picture, preferably a witty one, and upon my return I’ll pick the winner and post the prize anywhere in the world.