Tour of Rwanda
The overall classification was won by the USA’s Kiel Reijnen of Team Type 1 but Joseph Biziyaremye deserves a mention too. That’s him above in Pierre Carey’s photo, just look at the crowd’s reaction as he crosses the line. L’Equipe’s Philippe Le Gars tells the story better than me but if you want it in English, here goes.

No Rwandan rider had won a stage in the national race since its creation three years ago. The local star is Adrien Niyonshuti and he would have been a contender but has been carrying a shoulder injury. Niyonshuti’s qualified for the 2012 Olympics but some of the others on the national squad had not ridden a racing bicycle until just a few months ago. Amongst these novices was Joseph Biziyaremye, a pedal-powered rickshaw driver who heard about a talent-spotting race a while back. He turned up and won it, impressing Jock Boyer – the first American to ride the Tour de France – who now runs Team Rwanda, a cycling and development charity. Biziyaremye was packed off to a training camp in South Africa run with the help of the UCI for six weeks. He came back home and the Tour of Rwanda is only his third bike race. He won the final stage into the capital Kigali with a fine solo victory.

100 year old record
If Joseph Biziyaremye’s tale is encouraging, here’s Robert Marchand? Born in 1911, he started cycling in 1925 and turned 100 on Saturday. He decided to attack the hour record.

Instead of the track he used an indoor trainer so it wasn’t official but it’s his birthday so he can do what he wants. He rode 23.2km and told Le Parisien that he could have gone faster but didn’t want to get his heart rate above 110 beats per minute. As Alain Rumpf points out “based on the old formula max HR = 220-age, the man rode bloody hard“. Quite true.

Marchand doesn’t just ride indoors, he is known in France for riding cyclosportifs but he was run over by a truck earlier this year and forced to cancel a few entries. 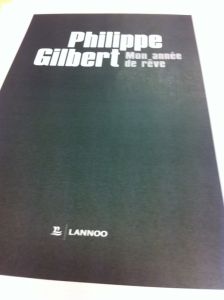 Vote Vinokourov
Incumbent Kazakh President Nursultan Nazarbayev unveiled a list of his party’s candidates for elections in 2012. As well as his daughter there is a collection of celebrities, headed by Alexandr Vinokourov. If this surprises, perhaps it shouldn’t. The Astana team has long been a political vehicle designed not just to present an image of the country abroad but to sprinkle stardust on Nazarbayev.

Race organisers
The Association Internationale des Organisateurs des Courses Cyclistes have been meeting in Vienna. The AIOCC is the race organisers organisation and they’ve said they will look more at new technologies like GPS, helmet and on-bike cameras as well as cameras in team cars.

I’m in two minds about this. Bike racing is slow, a process of attrition where you need hours of racing before the selection begins. I fear too many gadgets and gizmos could be used to liven up the empty airtime and I enjoy the scenery and don’t want a heads-up display of heart rates, wattages and cadence; indeed a survey earlier this year showed the largest segment of the Tour de France audience was made of people wanting to see the countryside. But done well this need not be the case, with the internet and digital TV it is possible to have the basic coverage and, at the press of a button, to fill the screen with data.

Cycling is changing. As we’ve seen this year in the Tour de France race organisers are changing formats, see the green jersey competition with the one intermediate sprint per stage, or a 110km mountain stage that proved more exciting than most 220km stages. We’ll see if cycling goes from sport to a more theatrical and action-packed format, what the French call le sport spectacle.

Next post: McQuaid: “I don’t know exactly where we are”