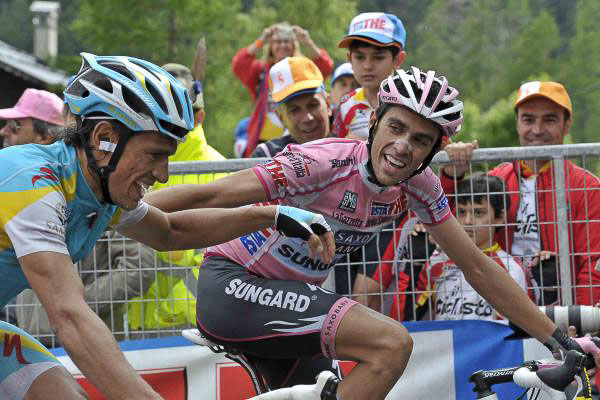 The sport of cricket has two international players jailed after a trial in Britain. The case is about match fixing, in particular the players conspired to bowl the ball wide in return for money and that these actions would allow a gambling syndicate to bet on the outcome of these mid-game incidents. Rightly so this is a scandal.

But I can’t help contrast match fixing in many sports with professional cycling, where attitudes are very different. Put simply riders sometimes conspire to fix the results of a race. But this is different.

Let’s take a recent and obvious example but there are others. On Stage 19 of the Giro d’Italia Paolo Tiralongo (Astana) was alone at the front of the race, having attacked with 5.5km to go on the final climb. But the others were closing in fast, in particular Contador. Here’s the video:

As you can see, Contador has words with Tiralongo and then the Spaniard takes a long pull and is “outsprinted” by Tiralongo. In fact Contador was team mates with Tiralongo the previous year and with six kilometres to go he told Tiralongo to attack and then helped him win. Many acknowledged the gift, headlines said this aloud. In cycling this was seen as a great thing, a moment of noblesse oblige with a rider rewarding an old team mate, with Contador sharing the spoils of the race after he’d taken so many stages already.

But hold up. Is this not two athletes conspiring to fix the outcome of a race? Isn’t this illegal?

We can review two things. First the hard rules and their black and white text and then softer subject of culture and tradition of the sport.

1.2.030 Anyone subject to the UCI regulations may not be involved directly or indirectly in the organisation of bets on cycling competitions, under penalty of a suspension of between 8 days and one year and/or a fine of CHF 2,000 to 200,000.

Now for the softer side. Collusion is essence of bicycle racing. When two riders escape they share the pace and even if they are rivals they co-operate and conspire to escape the peloton’s grasp. This is what makes cycling so intriguing, the contradiction where rivals form a temporary alliance to beat others. Chess on wheels, spandex diplomacy, call it what you want. It is all about collusion, no?

You can take this further. Take a stage race where a tiny climber and a larger GC rider are in the lead on the final climb of a mountain stage. The climber might try to jump away but knows if he’s caught and it comes down to a sprint then he’s not going to win; the GC rider is keen to put time into rivals further down the mountain. So the lead duo make a pact where the climber gets the stage so long as he rides steady and the GC rider takes the overall lead. Both stand to gain from this alliance.

But does everyone win? With the rise of gambling, some might be watching the sport and dropping money on the outcome and if riders are fixing the result with 10km to go then is then I can’t help wonder if the police or a judge would understand the rider’s pact in the same way as we might.

There is plenty more to this subject. I’m only looking at the most innocent and obvious examples. Money can change hands, team directors can phone rival team cars for help. Results can be bought and sold. Jobs are even offered. Some of this crosses an ethical and sporting line. For the sake of brevity, I won’t lift this stone right now, preferring to stick to obvious gifts and pacts.

Summary
Cricket players are going to jail for conspiring to fix events in a match. Riders openly collude in a bike races. I wanted to explore the issue of what is scandalous on one sport but tactical in other.

The differences are stark. The cricketers took money in a pre-planned conspiracy, cycling is about circumstantial alliances forged during a race and often in the closing moments. Find riders fixing a race before they’ve clipped into the pedals for the day and you can ban them, even jail them. Instead it is only once, say, two riders have made it to the final climb of the day and have a margin big enough to discuss the finish that any deal-making can occur. It is near-impossible to try and fix a race result prior to the physical selection.

I gather sumo wrestlers can conspire to lose. In Formula 1 a driver can ease up to let a team mate win. But few other sports see collusion so essential to the result. Perhaps this is why gifting wins in cycling is tolerated and at times celebrated when it could cause outrage if, say, a football team let a rival win?

The practice of allowing others to win is more an act of generosity more than a conspiracy and more akin to an emperor handing out favours rather than skewing the result of a race;  a rider has to be in command to make the gift. I can see legitimate frustrations if someone placed a bet for a rider to win a mountain stage only to see him sit up and let a lesser rider sneak the win; but then again the practice is known and should form part of the predictive homework, one of the what-if scenarios a shrewd gambler considers. And besides, the sensitivities (and wallets) of those gambling are secondary to sport.

The practice of awarding wins and making deals is part of cycling’s tactical sophistication. It is part of what makes a six hour race compelling to watch and nobody is throwing away wins in the classics or the overall stage race. These practices are far removed from criminal conspiracy and corruption. Finally remember the vast majority of races are fierce competitions and most days the best rider wins thanks to their fitness and tactical abilities.