“The Competition Bicycle, a photographic history” is the full title of Jan Heine’s book and this is what the book is all about. It features 34 bikes from the earliest race bikes to modern era machines and there are extensive studio photographs of each machine.

The bike is the star in this book. You might have seen black and white images of Fausto Coppi on his Bianchi or faded colour images of Eddy Merckx on his orange bike in the 1970s but now you can see these bikes in full colour. Each bike gets several pages of photographs with some text to explain history and context of the bike. For example Merckx’s orange frame is labelled “Eddy Merckx” but is actually a De Rosa. The author has taken care to find the authentic machine.

At times the studio photographs are unforgiving in their forensic exposure of a bike’s details. We might marvel at the champions of the past but suddenly the up close images of their bikes look less magical than we might care to remember. Put simply old bikes often look old under bright lights. Even those from the modern era show their age, for example Sean Kelly’s Concorde is battered and chipped, the rims are worn and the chrome is starting to rust. Moser’s hour record bike looks fast… until you spot the flat tyres. But this detail is also fascinating for you can see how earlier machines would have looked after they’d been ridden a few times. Some bikes are clearly collection pieces, lovingly cared for but others appear to be museum pieces, preserved but not polished. 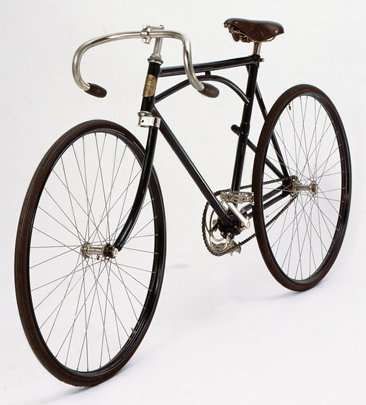 What surprised me was the innovation from an earlier period. French manufacturer Labour released their Tour de France bike in 1910 with a single fork stay, something imitated by Cannondale in more recent years. Or see the Caminargent bike from 1939 that weighed 9 kg or René Vietto’s superlight Barra that was 8kg. Many of today’s Pro Tour team issue team bikes are not much lighter although they are presumably considerable more rigid and come with more gears, refined braking and so on. All the same, today’s side-pull calliper brakes are only improvements on the original designs, a tale of ongoing refinements rather than radical change.

There are other details. You can see over the pages how chains have improved with time. Earlier models looked like something you’d find underneath a motorbike today, with large iron links. This is the beauty of the photographs, they are so large and clear you can see all these details.

The book is not a collection of the most famous bikes belonging to champions. There are many that have become famous but alongside the bikes of Coppi and Merckx there are some machines that have more modest stories. You can see an early mountain bike, machines used for land speed records and 1950’s courier bikes which helped ferry newspapers from the printer to the news kiosk in record time. But each tells a tale.

If I had a criticism of the book it would be that it lacks a truly modern bicycle, perhaps a titanium frame from the 1990s, a Colnago C-40 or an early Trek or Giant or perhaps a Cervélo from last season. But this book is a history of bicycles and their evolution and not a buyer’s guide and information on these more modern machines is readily available.

Summary
A very well-researched collection of bicycles over time. The photography captures many details, the words add even more. If you enjoy modern bike technology you might find this review of older bikes surprises in that much of today’s technology is recognisable on an early bike. If you enjoy the history of the sport then this will give you a fresh look at the machines from the past.

The book is available from Bicycle Quarterly and all good book shops.

Review disclaimer: this book was sent free by the author for review.