Can Quick-Step and Omega afford to let Gilbert go? 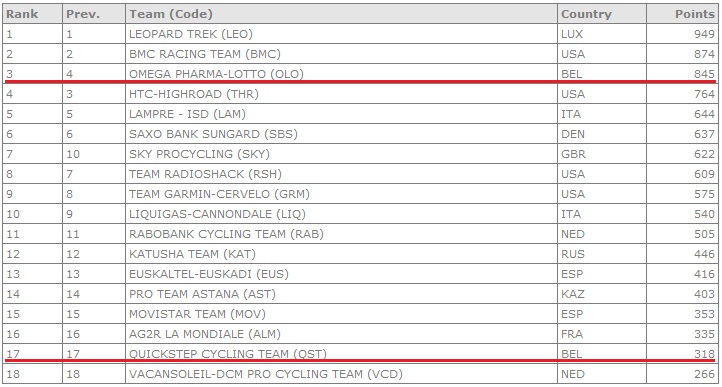 That’s the current team standings. Note Omega Pharma-Lotto are sitting in third place whilst Quick Step languish in 17th place. A lot of this is down to Philippe Gilbert. As of Sunday he held 568 points, meaning that if you subtract his 568 points from Omega-Lotto then the Belgian squad would be in… 17th place.

Everything is due to change for 2012. Belgian company Omega Pharma and its owner Marc Coucke is teaming up with Quick Step, whilst Lotto – the Belgian state lottery – is setting up a team on its own. We’re only five months away from the start of the 2012 season but there’s so much to be resolved.

Above all, Philippe Gilbert’s contract and the destination of those 568 points. Because the “Ogre of Remouchamps” is still under contract with Marc Coucke until the end of 2012. Coucke and the Quick Step manager are very keen for him to stay. But slavery has long since been abolished and whilst Gilbert has a contract, you can’t force him to work. If he is to join BMC Racing then he’ll have to compensate for breaking his contract. But imagine the sum involved: we’re talking enough to make the difference between being in the top tier with Pro Team status and being a smaller Belgian squad that relies on invitations for the big races.

All this demonstrates the odd way points are used. As a twitter correspondent suggested yesterday we have sports teams being formed for 2012 on the basis of a 2011 team’s results. Imagine if a soccer team recruits a new goal scorer… and the scorer joins with their goal tally. For as good as Gilbert is, he has counted on team mates to set him up for the win. If the points are next to Gilbert’s name, they were helped by Jelle Vanendert, Jurgen Van Den Broeck and others.

Garmin-Cervélo boss Jonathan Vaughters has suggested the points should be shared between a rider and a team and I’m inclined to agree. When a rider jumps to another team they currently take all their points tally with them. It means a team lives in fear of riders being poached. Now it’s fine for riders to jump teams but their results are the end point of a process beginning with training, coaching, massage, tactics, nutrition, support and all the other things a team invests in its riders.

Key man risk
In response you could say teams are over-reliant on certain riders with big points hauls for their position in the rankings. This is true but I quite like the idea of a team having a big champion instead of 10 above average riders who are capable of picking off ninth place in a semi-classic.

Summary
Philippe Gilbert might be on his way to BMC but he won’t come cheap. With his haul of points he alone can make the difference between the top league and automatic entry into the Tour de France and being on the margins of this. Look at Geox-TMC for example, you could be forgiven for forgetting about this team because it’s not been as visible this year. Points are valuable assets but for me a proportion of them are down to team work and any departing riders would do well to share their points haul with the team.