How much does a rider earn? 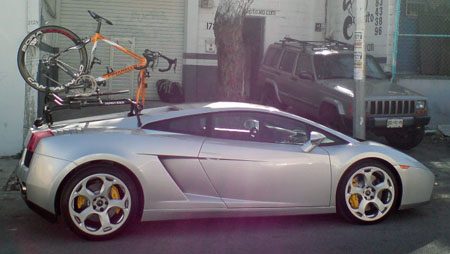 The simple answer is €218,000, about  US$305,000. But before you rush out the door for a training session, note this is the average salary in the bunch and averages ignore detail. Simply put a few riders earn millions whilst most collect more modest pay.

I’d tweeted about pay yesterday and a couple of readers emailed to ask how much a rider earns. It’s a private matter in many respects but some details were published in French newspaper Le Journal de Dimanche which quotes the UCI regarding the average salary figure but later contradicts itself saying the “average Pro Tour salary is €12,300“, a monthly figure as is the convention in France meaning €147,600.

But averages mislead. As you probably know in sports, the winner takes all. Precisely because we often forget who finishes second in a race, yet alone fifth, those who win the most races are the most visible and get most of the financial rewards. As such Alberto Contador earns more than his eight team mates in the Tour de France combined. Estimates put Contador’s pay at €5 million. The article puts Andy and Frank Schleck each on €2 million and Philippe Gilbert on €1.2 million.

Within the French peloton Sylvain Chavanel is the best paid at €800,000 with Thomas Voeckler not far behind. Next come Pierrick Fédrigo and Sandy Casar are FDJ’s lotto winners on around €400,000 and Ag2r’s Jean-Christophe Péraud – silver medalist in the Beijing Olympics MTB race – rakes in €350,000, despite never having won a race on the road.

Salary vs. income
Just as talk of the average salary is misleading, so too are the figures quoted by the JDD. Because rider pay is rarely a single salary paid each month. Instead there are performance bonuses, image rights, merchandising, endorsement fees and other payments. These are more common for the higher paid riders.

At the lower end a rider will earn from €40,000 to €100,000 depending on their experience, their use to the team and also their haul of ranking points which can help their team stay in the top league of teams.

Minimum wage
There is also a minimum wage imposed by the UCI. For so-called ProTeams – the top 18 – this is €38,500 a year. For the next level, so-called Pro Continental status, it’s €32,300. But I can reveal some teams don’t always pay this wage or insist on payments back from riders. Most however respect both the spirit and letter of this rule.

Not just riders
Riders certainly use up most of a team’s wage bill but some squads can employ up to 100 people, meaning maybe 70 staff. Obviously one superstar rider will earn more than all the mechanics and soigneurs together but bear this in mind, indeed the results achieved by the star rider are often a collective victory.

Comparisons
For all the talk of high pay, the JDD suggests the combined wage bill of all 489 riders in the top-18 teams is less than the wage bill of Olympique Lyonnais, a soccer team. But in tennis you see the top few players “hog” the prizes and pay but quite quickly less players are on very modest wages, indeed some can be out of pocket if they travel to a tournament.

In cycling there is big money but this involves the broadcasting rights which are owned by the race organisers, for example ASO in the Tour de France or the UCI for the World Championships. This TV airtime is what then attracts most sponsors for they can get their brand into people’s homes via media coverage.

Summary
Pay varies a lot, some collect big rewards but most don’t. Rather than a focus on “who gets what” I’m more interested in the structural factors at play because compared to other sports it seems pay is relatively low, especially when you consider the commitment, hardship and risk involved in being a pro cyclist.

Riders are not organised in the way some US sports are and the real money flows to those holding broadcasting rights events like the Tour de France are bigger than the riders.