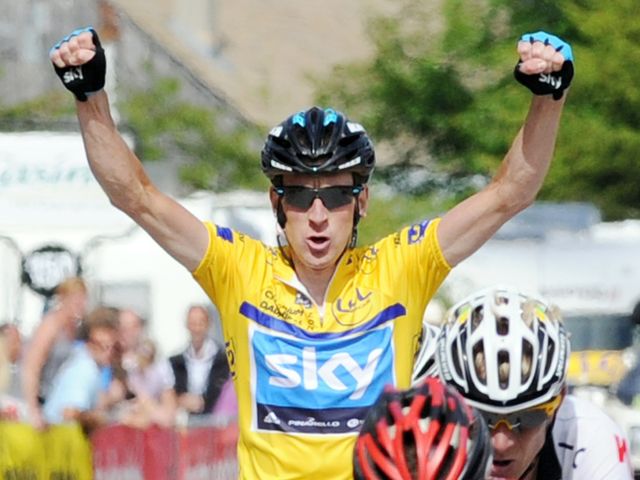 Bradley Wiggins took a great win in the Critérium du Dauphiné, becoming the third Briton to win the race after Brian Robinson and Robert Millar. Taking the lead in the time trial stage, he rode strongly in the mountains to defend his lead without losing time to his rivals.

First of all, Wiggins has won a great race, for those who support him, this is itself cause for celebration. For me, it’s far better to win this race and put in a decent performance in the Tour de France than just aim for success in July and finish in a forgettable ninth place with no wins to your name. Watching everything through the optic of the Tour de France is excessive, the Dauphiné is one of the top races on the calendar already.

But when it comes to the Tour de France, I’m not trying to be cynical or mean, just realistic. The Dauphiné isn’t the Tour. It’s one thing checking a still-to-reach-peak-form Cadel Evans and marking Alexandre Vinokourov and Jurgen Van Den Broeck, another trying to follow Andy Schleck and Alberto Contador in July. Plus history demonstrates that few winners of the Dauphiné have gone on to win the Tour de France.

What if he’s not in peak form yet?
Holding form from now until late July is a big ask. But Wiggins might be able to improve, maybe he’s not in peak shape yet and can scrape out a few more watts, or lose yet more body weight. If so he can use this race as part of the build-up like anyone else and coach Matt Parker and the other Team Sky staff will be vigilant here. Indeed seeing as he lost contact a couple of times on the way to La Toussuire he’ll need to go faster. Remember he average speed uphill is significantly higher in July.

Plus there’s the dynamic of success and momentum. I look around and Andy Schleck’s dropping his chain, Alberto Contador is attempting a Gir0-Tour double not done since Marco Pantani in 1998 and nobody else is looking too sharp right now, although that might be deliberate, Gesink sat up one day in the Dauphiné and Andy Schleck did the same yesterday in Switzerland. Wiggins can take the satisfaction that others are playing catch up.

Plenty to look forward to
But if I say he won’t win the Tour, he can still have a very productive July. There’s Stage 2 and the team time trial, a chance for the first rider in the team over the line to take the yellow jersey. A top-10 finish is quite possible and he’ll look forward to the penultimate stage, the Grenoble time trial.

Team Sky have other reasons to be positive. Edwald Boasson-Hagen seems over his springtime injuries, Rigoberto Uran is proving his talent and Geraint Thomas looks increasingly versatile. Since the creation of the team they’ve struggled to transform their budget into consistent high level success but that’s true of other teams, for example Katusha.

Summary
Rather than seeing this as a marker for the Tour de France, it’s a great win. Indeed, Team Sky might want to play up this element to ensure expectations don’t grow to big for July, a concern this time last year. But if it’s uncommon for the Dauphiné winner to follow up with a win in the Tour de France, it’s common for a Dauphiné winner to be in the mix for stage wins and a high placing come July. Me, I  don’t see Wiggins winning in July and podium spot sounds hard. But stranger things have happened.