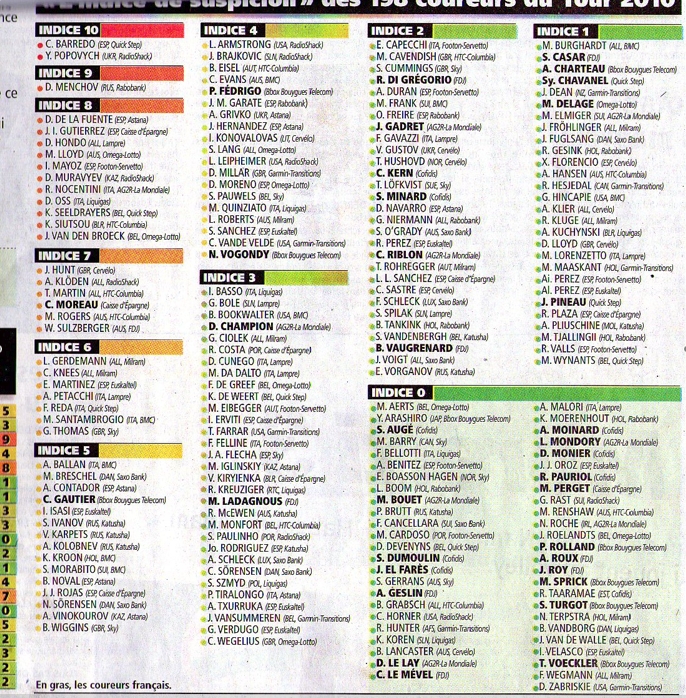 That’s the list from this morning’s L’Equipe. It shows an internal UCI ranking of riders according to levels of “suspicion” relating to strange values gathered under the bio passport scheme. The higher the score, the greater the suspicion. The list was formulated by the UCI on the eve of the 2010 Tour de France.

Handle with care
Suspicion’s a particularly nasty sentiment. Finger pointing, accusations, denunciations, whispers and more are all ugly because often they’re quite wrong. So take the list above with more than a pinch of salt. There’s no direct link with doping, this is just an internal score used by the UCI to help testing. But both the list and the leak raise serious questions.

Why?
The anti-doping budget is significant but not huge. Given limited resources the UCI, the UCI has to target testing where it counts. Some riders and teams get tested more than others. Put simply the likes of Astana and Radioshack get more knocks on the door than others. Unfair? Perhaps, but the testers believe they need to watch some more than others. I welcome this intelligence-based testing, it makes sense.

How?
The scores are based on data gathered from the bio passport scheme. Interesting scores, strange numbers and more give rise to higher scores. But riders are informed if the numbers are off a bit and can offer an explanation. Remember that if riders have strange numbers the UCI can sanction them. We’ve seen riders like Franco Pellizotti banned after the Italian presented strange numbers during a series of blood tests. So these scores are a warning light, an alert to for people to be vigilant. But it’s not proof of anything.

Plus points
Given the UCI’s information from the bio passport it shows how the UCI can’t afford spats with agencies like the AFLD. The UCI has intelligence on riders and so it’s useful to exploit the data, to certain monitor riders more than others.

Another bit of good news is that so many riders seem beyond suspicion. L’Equipe says the list is “reassuring”. I agree, go back 10 years and you’d find the majority of the bunch with a strange haematocrit count, a distribution of numbers unique to the pro peloton compared to the wider population. This isn’t to say everything is fixed, some are just resorting to new means. But there’s progress.

Data storage
For me, the biggest element of the story is two-fold and relates to the way the data is handled:

What next?
Things will be ugly. The internet allows rumours to spread fast and accusations to fly. But it’s not new. There’s a gripping French film called Le Corbeau that deals with accusations and gossip.

Filmed in 1943, the film was banned. Even if you don’t understand French, you can probably pick up the atmosphere of distrust in the trailer above. It tells of anonymous letters denouncing various people in a small village and soon the locals start pointing fingers, within time the mistrust turns into violence. The film is an example of just how poisonous suspicion can be in a small community.

The saving grace today, if there is one, is that riders – if curious to check their own score – will be united it denouncing the leaks and anyone making quick connections about levels. The UCI has already attacked the publication but for me that’s phoney, it’s like blaming a shark for biting as a newspaper will always look to publish information like this and the paper has accompanied the index with words of caution. It’s a shame the UCI communiqué doesn’t apologise for poor data handling.

Hopefully the storm will blow over but it chips away at the reputation of the bio passport. For me the biggest question is who leaked the information and what do they gain?