I won’t be doing a preview every day but today’s stage is on roads I know and two regions that I appreciate.

The riders will have pockets stuffed with energy bars and gels because today is the longest stage of the Giro at 244km. But the route passes through some great places for food and whether by design or accident is a tribute to the giants of Italian agribusiness. 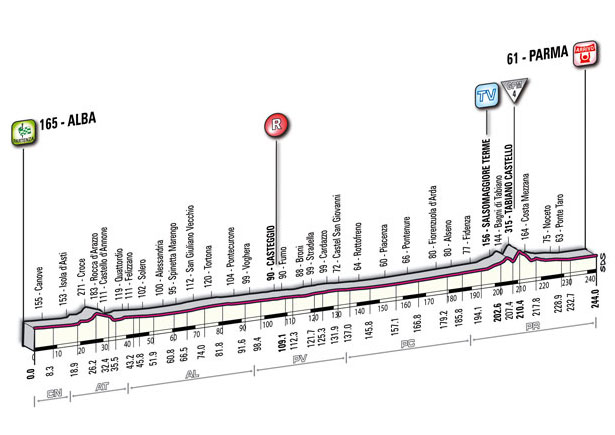 The start is in Alba, known for its Barbera and Dolcetto wine as well as white truffle production. But it’s also home to Italian food giant Ferrero, being where a baker called Pietro Ferrero first made some hazlenut paste in 1946, then his son rebranded it Supercrema and in time it was renamed Nutella. From this bakery one of the world’s largest confectionery was created and a business that has a touch of the Willy Wonka. Today the company sponsors the Giro, in particular with its Esta Thé soft drink although there is the recent tragedy of company boss Pietro Ferrero’s death, whilst cycling. Normally the stage would be a nod to this big backer of the race, I suspect the tone will reflect Pietro’s departure.

The race heads on through the Piemonte region, past vineyards and peach orchards but cunningly sticks to a very flat route. Riders will see climbs all around them, at one point intersecting the Milan-Sanremo route not too far from the Turchino Pass. But it’s flat and easy until a small poggio later in the stage. The climb via Tabiano Castello is steep with a 10% section but short and shouldn’t bother the riders but points are awarded, so expect some action.

The finish is in Parma, home to prosciutto di Parma and Parmigiano-Reggiano, the cured ham and cheese that are big Italian exports. Parma’s also home to two Italian food giants, pasta maker Barilla and dairy group Parmalat. It’s almost as if today’s stage celebrates Italy’s agribusiness sector. Because if every region has its local food, today we pass close to the three biggest names in the business.

But what about the racing?
Given Mark Cavendish was one of the five from HTC-Highroad to make it together across the line yesterday, you would imagine he’s on form and can cope with the hill and will be ready for the finish, plus he’s got a team ready to help.

But several other sprinters will want their chance, notably Alessandro Petacchi and Tyler Farrar but a host of others too. The pressure is on, there are few chances for the sprinters. The opening stage of a Grand Tour is manic enough but expect a lively finish. Indeed we might see a lively stage. A breakaway’s chances are slim given sprinters teams will want to control things but expect a move to try and watch the composition of riders and teams to assess its chances.

The final straight is 500m long and wide. Before that there are a couple of bends and some city centre cobbles, nothing too bad if it’s dry and the weather looks sunny and mild.

Time bonuses
Remember 20, 12 and 8 seconds are available at the finish, plus 6,4 and 2 seconds from the intermediate sprint. If Petacchi wins both intermediate and final sprints then he could take the pink jersey but the favourite for the pink jersey is Cavendish. For me it’s a shame Pinotti’s time in the lead won’t last so long but the time bonuses will liven up finishes later in the race.