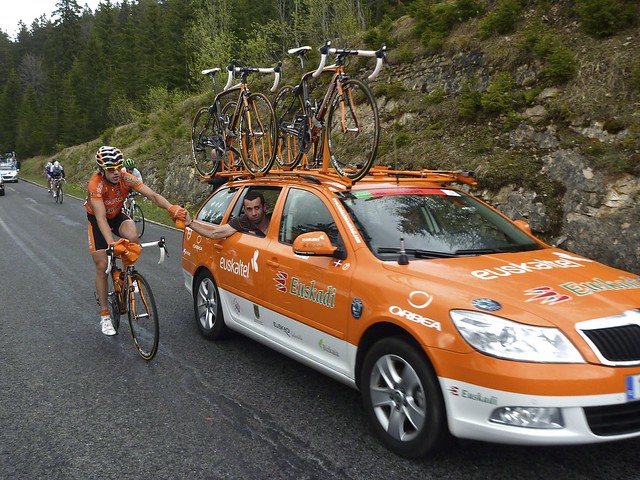 Mark Cavendish won in the Giro today but the post-race TV debate on the RAI coverage saw even Eddy Merckx get sucked into a debate over riders getting help to finish a climb. The TV show is called the Processo alla Tappa which translates several ways, including the “trial of the stage”.

As well as praise for the win, for a moment Mark Cavendish was in the dock following allegations he used help from a team car to get up Mount Etna in time to avoid the cut-off. Cavendish came in with a group 26 minutes down and then at 56 minutes, a long way back, came the Aussie sprint tandem of Robbie McEwen and Graeme Brown and they were duly eliminated from the race, finishing outside the cut-off.

The allegations come from Spanish sprinter Francesco Ventoso, via Twitter who said a whole group was clinging on to a car and then told Italian TV that Cavendish was holding on to a car, adding “he should have been disqualified“. To which Cavendish replied he was accompanied by a camera crew and a commissaire. I doubt his words were that carefully weight but that wasn’t a total denial.

2.3.030 Whatever the position of a rider in the race, he may receive such assistance only to the rear of his bunch and when stationary. The greasing of chains from a moving vehicle shall be forbidden.

That’s the UCI rule and there’s also another banning riders from pushing one and other. In short no rider can get a push from another vehicle. But that’s not to say it doesn’t happen. Indeed, it’s often tolerated and you’ve probably seen footage of a rider getting mechanical assistance from a moving car.

This can often mutate into more than mechanical aid, for example the clip above shows BMC Racing’s Manuel Quinziato getting a new front wheel, presumably after a puncture… only for the mechanic to start work on his back brake. Meanwhile the Italian is being hurtled back towards the bunch at speed. This is but one example and let’s not get too cross with Quinziato as everyone does it. I’m ambivalent, if you puncture then the tow just helps save some energy to get back on but the net result is a tired and stressed rider, they still pay a price for the puncture. As you can see in the image above from Liège–Bastogne–Liège by Elvis Boudoin, riders are holding on to a motorbike. This is very different to a move to regain the bunch after a mechanical incident. Similarly riders cling to team cars for help in the mountains and some even ask for fans to given them a push.

I’m inclined to forget the Cavendish incident here since so many other riders do it, to single out one rider here is a bit unfair. In a visit to see the Tour de Romandie, Alpine blogger extraordinaire Will wrote:

“I really didn’t have any good race photos. However, it was fascinating to see just how many of the stragglers were “assisted” by cars as they tried to stay ahead of the broom wagon.”

Despite not having any good photos, the pic at the top of the page is by him, a great image of the so-called “sticky bidon”, where a rider pretends to get a water bottle but holds on to it. Sometimes this happens for a moment, sometimes it can last for minutes.

If it’s banned, remember the race convoy is very long. Riders can be many minutes down on the action and the commissaires are not spending much time policing every rider, they want to observe the breakaway and the bunch. So it’s common for riders and teams to try their luck. It’s wrong but many get away with it.

Summary
After the TV studio controversy I wanted to check the rules. Interestingly all moving help is forbidden and a mechanical incident requires a rider to stop. But this is never enforced. Once rules aren’t enforced it’s predictable that some will to pick and chose when it comes to other rules. Consequently a few riders and teams get fined for obvious “sticky bidons” in a race but not many eyes watching what’s happening at the back of the race so it’s long been a question of what some can get away with.

If Mark Cavendish is being mentioned by name today then I hope the informants citing his name to the media know a good glazier because their glass house is probably damaged this evening. This is widespread.