Fränk Schleck won the Critérium International race, taking the lead after a powerful solo ride up the Col de l’Ospedale and defending his lead the following day in the short 7km time trial. Watching the event on TV I thought his chest looked weird and at the time put it down to hard breathing and his extremely thin state creating an avian-looking thorax. Plus I had my eye on Gent-Wevelgem and live coverage with the Pavé crew, that was a lot more exciting than a time trial.

But now it sees he was using a Camelbak. In case you don’t know, this akin to a small backpack with a hose and when filled with water the rider can drink from it. It’s popular with off road riders. Only the pouch is worn on the back but apparently Schleck wore it on the front, creating a bulge on his chest. As such this narrowed the gap in the area between the chest, arms and legs and made him more efficient. 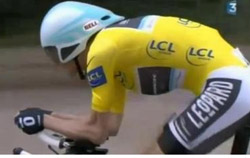 Some claimed this was being used as a “chest fairing”, indeed dubious Italian doctor Michele Ferrari puts the race result in question, saying that it could be worth two seconds and thus 14 seconds in the 7km chrono… Schleck won the overall by 13 seconds ahead of Movitar’s Vasili Kiriyenka, meaning it made all the difference if you believe him. I find it amusing to see Ferrari questioning the methods of others… but let’s look wider.

Was it illegal?
There are UCI rules on clothing. In particular, here is rule 1.3.033:

It is forbidden to wear non-essential items of clothing or items designed to influence the performances of a rider such as reducing air resistance or modifying the body of the rider (compression, stretching, support).

As such if the Camelbak aided the aerodynamics then you can argue it breached the rule, being an item designed to help reduce air resistance. But the item in question is also allowed in competition as a means to help keep a rider from getting thirsty, it is allowed and if the consequences mean it makes the rider more aero, then so be it but that is secondary.

Thirsty work
Corsica can be a warm place but a morning in March is not the normal place to need water during a 7km time trial, a 12 minute effort. It seems that Fränk Schleck probably didn’t need the water and I struggled to spot the hose. Indeed, when he crossed the finish line he reached for a drink, as you can see in the picture below.

So it seems to me he was pushing the rules as well as the pedals. But, and here’s the important bit, it is for the UCI to control this. It supplies the commissaires. Apparently race officials saw the Camelbak and did not enquire nor protest. Rule 1.3.072 sets out the possibility of a fine of 50 to 200 Swiss Francs and not being permitted to start… but nobody objected and Schleck duly started. Now the UCI have announced an investigation.

Not new
I’m reliably told other teams have looked into this, indeed inflating the Camelbak for a better profile but that they found it was not efficient. Perhaps it might work better with some riders than others?

What next?
I suppose someone could appeal, they could make a protest. For example Kiriyenka and Movistar might feel they lost out but it’s probably too late, overturning the result is far from certain and they’d be certain to lose friends in the bunch.

The UCI is investigating but it might prove hard for them to blame themselves for not spotting this, plus their rules are not precise enough to rule on the Camelbak. This is probably an issue best left to history rather than the CAS. Don’t be surprised to see riders this summer trying the same techniques but the UCI in turn will also be more vigilant.

Thanks to the Italian Cycling Journal for sending in the side profile pic.

Next post: Le Nord: to hell and back in the north of France