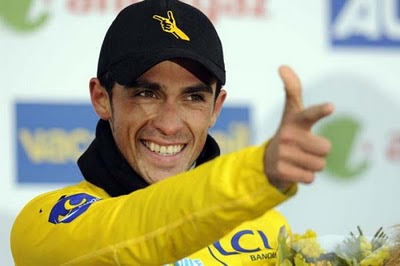 Who is he aiming at?

L’Equipe is reporting that Contador’s get out from sanction is due to a technicality, the same story has been put in English over at Velonation. In boils down to a right under the Spanish constitution to be informed of any accusation. A fundamental human right.

In absence of official explanation from the Spanish authorities, I’m not going to comment on the Contador case, rather I want to look at the rules and see what they say. Here’s Rule 357 from the UCI Cycling Regulations (Part 14, Chapter XIII):

It means the UCI’s channel of communications with the RFEC is normal, that there’s no need to copy documents to Contador. Contador’s constitutional rights are the concern of the RFEC and this is the body charged with promptly relaying any accusations and information.

We should be asking whether the RFEC complied with 357 and established “immediate contact” with the holder of licence #02247396C. Certainly any failure by the RFEC to pass on information would be a stupid mistake. But surely Contador’s acquittal is based on additional factors? We should know soon but until then I’m simply saying the reason suggested by L’Equipe seems weak.

Finally, a thought: the process has been very lengthy because we were assured that the UCI and WADA wanted to present a watertight case. It would be a blow if all along one of the obvious rules was overlooked. But that’s an if, once again I’m only trying to shine a light on the rules to contextualise the Equipe claim.