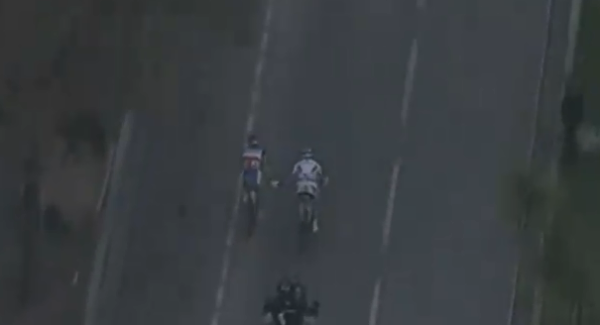 Thomas Voeckler won the Tour du Haut Var two-day stage race in the south of France this weekend. Cofidis’ Samuel Dumoulin won the stage on Saturday and held a one second lead over Voeckler. But during the second stage to Draguignan the French champion slipped away on a descent and worked hard with Julien Antomarchi of the modest VC La Pomme-Marseille squad (NB a cycling club with its own pro team) to stay away.

As they approached the finish the pair shook hands (pictured), presumably agreeing that Antomarchi could have the stage since Voeckler was going to win the overall. Deals happen sometimes and this time it was a fair trade since both riders stood to gain. It wasn’t an undeserved win either, Antomarchi was strong and Voeckler’s tongue was hanging out and sometimes small gaps opened up when the neo-pro pulled through.

You can see the last 15 minutes of racing over on Youtube.