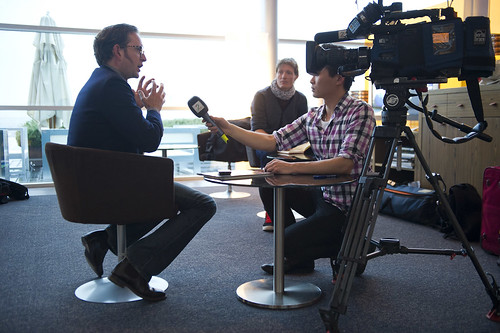 It’s not easy being Jonathan Vaughters. The manager of Garmin-Cervélo has a lot on his plate given Matt White got ejected from the team. But in between managing one of the biggest squads around, he’s happy to chat via twitter and even visits the cyclingnews.com forum where often the loudest rage can drown out more nuanced voices. Indeed he gets a lot of abuse and he’s just blogged on cyclingnews.com about how difficult this can be:

“I’ve always been infuriated, saddened and hurt watching my friends, peers and myself get accused of everything short of murder on all that new media has to offer. Not by the journalists that have researched the story, no, rather the massacre occurs in the comments and forums that follow the story. The chattering, anonymous fans hurling comments and critiques are so hurtful. I can’t imagine saying such things to anyone, not even my worst enemy.

So this is just a quick word to say thanks to Sant Juan dels Girona, Jonathan Vaughters. It’s not just him but the whole team are willing to express themselves, whether via twitter or just for a chat before a race. I’ve put messages to him via Twitter and he’s been generous to reply.

A bee or a forum user?

A final thought
The “join the dots” mentality identified by Vaughters is understandable, that a rider making sudden gains late in a career can attract suspicion. After all Vaughters has had to fend off doubters over Wiggins in 2009. Scepticism is well-rooted in fans and managers alike. Time after time riders have come from nowhere to dominate a race, only to get busted by the anti-doping controls or even a police raid. Nobody can be blamed for taking a defensive stance.

But dialogue and transparency are part of the process to make the sport more approachable. It would be a shame if the same fans who cry omerta when some teams refuse to explain themselves manage to scare away one of the most approachable and friendly guys in the business.