Where do the French riders live? 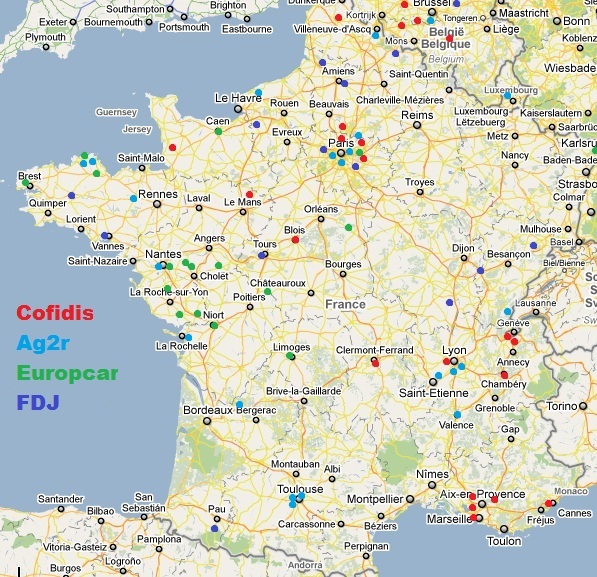 Above is a map of France. Look closely and you’ll see coloured dots marking where riders from each of the four main French cycling teams are from. I’d been wondering if the teams had any regional bias towards signing riders and finally got round to charting where the riders are all from.

Bbox, now Europcar, is from a structure based in the Vendée region and you’ll see many green dots around this area, that is to be expected but it’s interesting to note just how many of the riders live within a small area. By contrast Ag2r-La Mondiale has a history of being based in the Alps, and has a feeder amateur team in the region, but it doesn’t have that many riders from the region.

One other remark is just how empty the map is, France is a large countries and whole regions don’t have a local pro. Apologies to Saur-Sojasun for leaving them out (they mainly come from Brittany and the Alps) and the same for the more obvious Bretagne-Schuller. But I suspect that even with the addition of these riders the map would still be blank.

The map isn’t exhaustive or forensically precise but I’ve tried to give an accurate demonstration. Riders living abroad are obviously excluded and there are a few cases where I don’t know where the riders are based so the total of dots doesn’t add up to the total number of riders.

The story will be similar in Italy, with Liquigas tending to recruit riders from the north east of the country, Lampre from around the Milan and Lombardia area and ISD having a more Tuscan feel.