There are some foods that are particularly European. Maybe people think of fine wine, truffles, baguettes and ravioli. But for cyclists there are some particular foods that stand out. As part of a series about food in Europe for riding, here’s the fourth: coffee.

Product description
This doesn’t need much explanation. If you have to know it’s a drink made by passing hot water over roasted, then ground coffee beans. 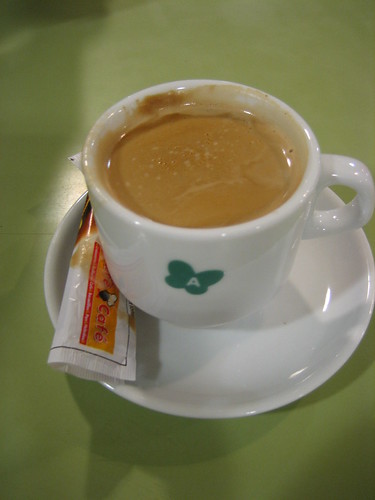 The important point to note is that a genuine coffee in Europe is small and black. There’s no milk, no syrup, no flavourings. Italy has cappuccino but it’s seen as a breakfast thing and rarely served after 11.00am. As standard it’s served in a small cup and black. It’s meant to be consumed quickly, a shot of coffee is not something to be nursed or accompanied by a muffin.

Euro Cyclist Use
A legal stimulant. It’s an ideal way to start a ride and you can stop en route too for a quick coffee, especially since a bar will be only too happy to refill your water bottles too.

A typical coffee bar is spartan and unwelcoming, there are no armchairs, Bob Dylan piped music nor Wifi. Certainly many a French café has a time-warp aspect. If some Parisian versions are architectural glories, and many outside France have mythical notions of welcoming cafés, your typical provincial version will have dusty shelves and awkward vinyl seats. You’re not meant to dwell. The antidote to this is to sit outside but even then, you don’t hang around for long, except if you are having an aperitif in the evening.

Many a local group ride starts at a café. For example you’ll find a handful of riders meet up most days at the Planet Café in Monaco to begin a ride out to France or nearby Italy.