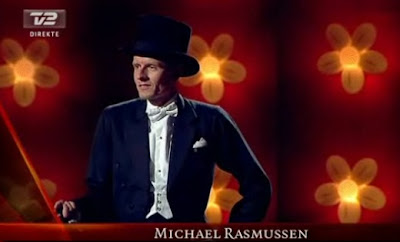 Michael Rasmussen was once famous for dancing up the hills on his tricked out Colnago Extreme-C but these days he’s reduced to dancing in the confines of a Danish TV studio, in the celebrity TV show Vild Med Dans show, Wild With Dance. The show is proving popular in Denmark

Michael rejected
Last weekend’s show saw the first pair of dancers get elimated and it was Michael and Dicte who were chucked out… only it was a certain Michael Olesen, not Rasmussen. Rasmussen and pro dance partner Mie Moltke survive another week but I’m sceptical about their chances of winning since Rasmussen barely smiles, he looks terrified at times. But what do I know? I’ll try to report back with any choice fancy dress from the next show…