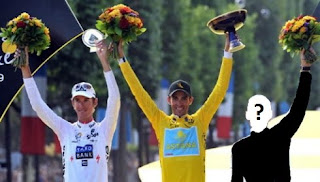 We’ve had one of the most mountainous Tours in recent memory and Alberto Contador and Andy Schleck are barely indistinguishable, a mere 8 seconds after 88 hours of racing. That’s a margin of 0.0025%.

There’s some irony in the 52km time trial as the course is so flat that the highest point on the route is 18m above sea level. The Erasmus Bridge in the Rotterdam was higher at 20m.

Contador’s been warning his rival’s not a pushover but when he cautioned that Shleck’s “the Luxembourg time trial champion”, well this says plenty. I happen to think that Andy Schleck might limit his losses respectably.

The real battle should be for third place. Samuel Sanchez has 21 seconds over Denis Menchov and the Russian is normally a better rouleur. But they both finished with near-identical times in the prologue although in the Dauphiné Menchov was fifth on the day compared to 80th for the Spaniard. In all, they’ve raced against the clock 17 times and Menchov’s been faster 13 times. But don’t forget Sanchez won the final time trial of the 2007 Vuelta a Espana.

“It’s all about recovery”
We’ve often seen riders build a lead in the mountains and then people worry on the eve of the final time trial: can the climber ride against the clock? People say it’s all about recovery, the final time trial isn’t a pure test of power and aerodynamics, instead it’s a test of how they’ve coped with the three weeks of racing. I think there’s some truth in this.

But let’s remember that only the top-20 riders really go for this stage, for the others the day is about keeping steady and even a form of recovery ride for some. So this partly explains why some climbers do surprisingly well.

Also the spectre of doping’s here as well. You might have been surprised by some freak results in past time trials but many of the climbers who became trial triallists were often busted for doping. It’s not about recovery, it’s also been about blood bags and EPO to keep your blood count up. I’m not saying this is happening on Saturday, more explaining why some surprised in the past.