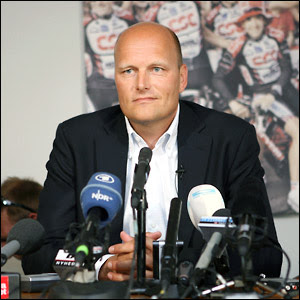 With the news that the Schleck brothers are to leave Bjarne Riis’s cycling team, time is running out for the Dane to find a new sponsor. The presence of the two lanky brothers is a real draw for any sponsor given the podium potential in the Tour de France.

In the short term it’ll be interesting to see if the Schleck-Riis relationship works in July, certainly my concern is that the brothers spend too long looking out for each other rather than nailing their rivals. With their departure, they might be less willing to listen to astute tactical advice from the team car, putting fraternal harmony ahead of victory.

Above all, it shows that the Schlecks have lost patience with Riis. What will be interesting to see next is whether any other key riders chose to jump. The likes of Cancellara, Fuglsang and Breschel will determine whether Riis has a roster to offer sponsors. It’s not over for Riis yet. If he can keep these riders then the team will still be attractive, above all if he lands a big name then he can make new signings. Roman Kreuziger is one rider interested in a new team and could be a logical signing.

Next post: Basso: "I want to win the Tour"