Electric bikes are in the peloton

I wrote about the rumours of Cancellara’s electric bike and it’s been one of the most popular postings here. Now further rumours of “motorised doping” exist. 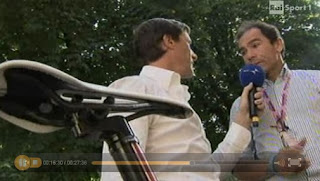 A TV report on Italian channel RAI, who cover the Giro, describes how their commentator tried the system. See for yourself here, it is part of the report (in Italian, 14 minutes in).

To summarise the report, ex-pro and RAI cycling supremo Davide Cassani gives it a go. “It left me speechless, I could ride at 50km/h no problem” says Cassani.

Cassani explains that the bike technology has been around since 2004 and its maker wishes to remain anonymous because he swears several professionals have been using it. When pressed again by his TV colleague, Cassani is formal: it is being used in the pro peloton.

Make of this what you will, it sounds almost too silly to believe but Cassani is someone used to defending his word: he was the journalist who brought down Michael Rasmussen after exposing the Dane was training in Italy instead of being in Mexico.

Apparently the activation mechanism is hidden in the brake hoods. Ideal for a rider who climbs short sharp climbs whilst seated with his hands on the hoods…