We We Young and Carefree
by Laurent Fignon
Here’s a review of Fignon’s autobiography. It contains a few elements from the book so if you worry I’ll spoil the read for you, look away. 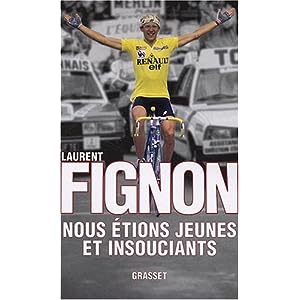 Fignon’s autobiography caused a storm when it came out. For the wrong reasons. Fignon had just announced he’d been diagnosed with cancer and the media leapt on this and claimed the use of doping products must be behind this. This reveals more about the French media than about Fignon, the knee-jerk response to link anything related to cycling with dopage is relentlessly depressing. Especially since calmer medical voices simply attributed Fignon’s illness to more benign matters, put bluntly: shit happens.

The book takes a predictable line through Fignon’s early life and then his time on the bike and then life outside the pro world. One thing stands out: he’s different. He has a view on the world and doesn’t suffer fools. This character, combined with his education, meant he approached cycling in a different way to many other riders, he’d often stand up for himself and talked directly to those in charge of his team or the sport as a whole.

The early part of his career does read like a joy. Wins come often and he’s got some great team mates. Indeed his Renault team is crushingly dominant at times. But the title, “We Were Young and Carefree” uses the past tense, implying that today Fignon’s no longer young and carefree. Indeed, you read as his career fades and he’s unable to change the trajectory, the past remains a happier place.

Fignon and his DS Guimard brought a lot of innovation to the sport and you can read accounts of this. Fignon was the first to set up a team where sponsors were naming rights, prior to this all teams belonged to a sponsor but Fignon and Guimard created a business that effectively worked as a marketing agency, free to be hired by willing sponsors. Similarly, Fignon recounts how he was one of the first to use heart rate monitors, in 1987. Many cycling autobiographies tell how a race was won but Fignon’s book goes deeper and delves into the structures behind the sport, the way riders deal with the media and more.

All throughout Fignon displays an iron will. This confidence sometimes turns into big headedness. After his back-to-back Milan San Remo victories, he explains how an early move allowed Gianni Bugno to win in 1990, implying an Italian combine to isolate him early in the race, as if the entire bunch had ganged up to prevent him. Similarly, he tested positive for amphetamines and pins part of the blame on his coaching staff.

Indeed Fignon is so confident that he can float above some things. At Gatorade he described how he avoided using EPO when almost everyone else seemed to be on it. He was wealthy, had several wins to his name, had nothing to prove and was due to retire soon: EPO just wasn’t worth it. Few other riders were in such a luxurious position.

Summary
Overall it’s a good read and contains some eye-opening anecdotes on racing in Colombia, riding with Bernard Hinault and being under Cyrille Guimard’s direction, and more. I’ve long been a fan and so some stories were already familiar but most cycling fans will enjoy the book.

You certainly get Fignon’s point of view. At times this is too much, you sense whilst he puts his case that the truth might not always be so black and white. But he probably would not have ridden with as much class if he didn’t have this ego.

An English version is due out in June. Worth a read.